Is Jerome Corsi Trying to Get Trump to Intervene (Again)? 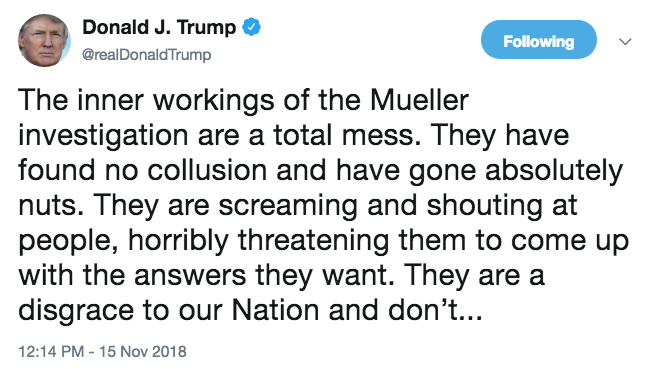 When his former National Security Advisor was at risk for lying to the FBI and serving as an agent of a foreign government, Trump considered pardoning him to keep him from talking, but didn’t.

When his former Campaign Manager was at risk for serving as an agent of a foreign government (and, probably, a whole lot else), Trump considered pardoning him to keep him from talking, but didn’t.

I wonder if Jerome Corsi thinks his luck would be any better.

According to the conspiracy theorist’s own telling, he has been in discussions with Mueller’s investigators since late August. The following has happened recently:

November 8: On his podcast, Corsi suggests something big is going down with Mueller

November 9: Corsi appears before the grand jury and doesn’t give the answer — regarding how he learned that WikiLeaks would release John Podesta’s emails — that prosecutors expected; they told him they were going to charge him with perjury

November 12: On his podcast, Corsi says he expects to be indicted; a huge media frenzy follows

November 13: The media frenzy continues until (he claims), moments before starting an MSNBC interview, his lawyer tells him to call it off

November 23: Corsi goes to the WaPo (off the record), AP, and MSNBC (the latter two both on the record) to tell them he is in plea negotiations 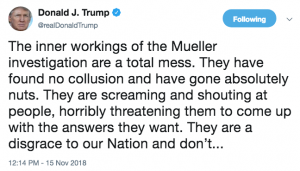 The reference to screaming and shouting appears to be based off Corsi’s claims of what went on in the grand jury.

So perhaps Corsi believes if he creates another media frenzy, Trump will take action.

Is it possible that whatever Corsi would tell investigators is more damning than what Mike Flynn and Paul Manafort have presumably already said? Recall that Roger Stone, in several of his many efforts to deflect any attention on his own actions, has suggested that Corsi had his own relationship with Trump (perhaps trying to suggest that if anything Corsi learned made its way to Trump, it would have been directly).

Stone suggested that the special counsel may actually be interested in Corsi’s relationship with Trump.

Corsi was a leading proponent of birtherism, the false conspiracy theory that Barack Obama was not born in the United States. In 2011, he wrote the book “Where’s the Birth Certificate?: The Case That Barack Obama is Not Eligible to be President.”

Around that time, Trump took up the conspiracy theory, questioning Obama’s citizenship and demanding that he release his birth certificate.

Stone said that during a conversation with Trump in 2011, “he said to me, ‘Who is this guy, Jerome Corsi?’” Stone recalled.

Stone said he asked Trump why he was inquiring about Corsi.

“I’ve been talking to him,” Stone recalled Trump saying.

Stone said that Corsi also met with Trump during the 2016 campaign.

And Corsi’s own lawyer has suggested Corsi declined to take part in criminal activity that Stone may have invited him to be a part of.

Gray said he was confident that Corsi has done nothing wrong. “Jerry Corsi made decisions that he would not take actions that would give him criminal liability,” he added, declining to elaborate.

Asked if Corsi had opportunities to take such actions, Gray said, “I wouldn’t say he was offered those opportunities. I would say he had communications with Roger Stone. We’ll supply those communications and be cooperative. My client didn’t act further that would give rise to any criminal liability.”

Of course, Corsi may not need a pardon to get himself out of the legal pickle he’s in. He may be counting on Acting Attorney General Matt Whitaker to bail him out. Whitaker was appointed the day before Corsi’s attempts to work the media; when firing Jeff Sessions, John Kelly made it clear Whitaker needed to be in place that day. And the same day that Corsi started this blitz, November 8, Michael Dreeben suggested both that Mueller could do all the things that prosecutors do without pre-approval — seeking immunity, making plea agreements, and bringing indictments — but also noted that subpoenaing a journalist is one of the things that requires Attorney General approval.

Prosecutors do this all the time. They seek immunity. They make plea agreements,. They bring indictments.

If we want to subpoena a member of the media, or if we want to immunize a witness, we’re encouraged if we’re not sure what the policy or practice is, to consult with the relevant officials in the Department of Justice. If we wanted to appeal an adverse decision, we would have to get approval of the Solicitor General of the United States. So we’re operating within that sort of supervisory framework.

Given the other things Mueller’s team has said — notably, that any subpoenas they issued before Whitaker was appointed remain valid — it’s not clear Corsi even could roll back any cooperation he offered before Whitaker came in. But that doesn’t mean Corsi might not try, especially if past efforts proved to have some effect.

At the very least, Corsi may be trying to give Trump more basis to bitch about witch hunts.

Pence Plays Statesman While Trump Tweets Angrily from a Florida Retirement ... Democracy Against Capitalism: Conclusion of the Conclusion