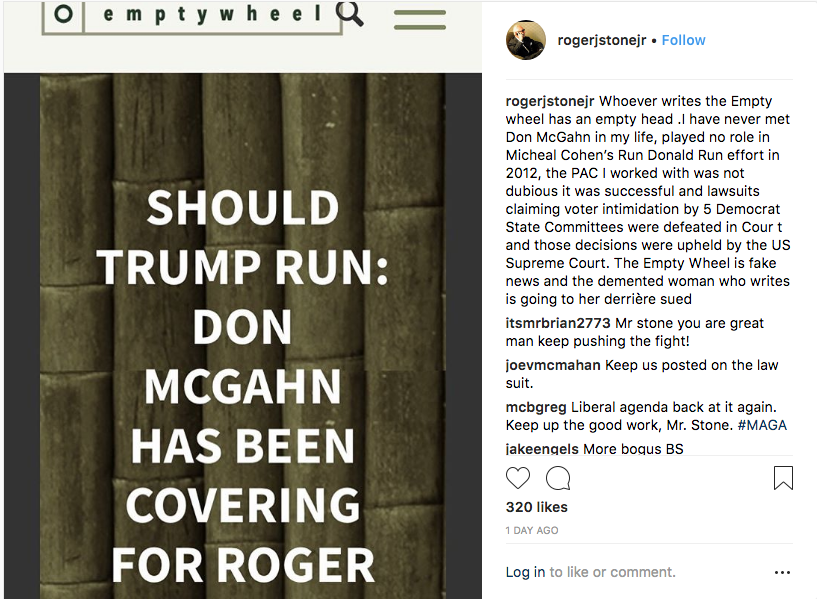 Of all the posts I’ve written about Roger Stone, I’m only aware of two that he responded to directly. One was this post from September 5, laying out how stupid Stone was for using Jerome Corsi’s August 31 report as a cover story for his August 21 “time in the barrel” tweet. We now know that the very next day, Jerome Corsi would tell material lies to Mueller’s team in an attempt to sustain a cover story that started with that August 31 report. Indeed, we also know that 16 days after I wrote that post, Corsi would testify to the grand jury that the August 31 report was written entirely to offer cover for that August 21 tweet (and, I suspect, Stone’s August 15 one).

Perhaps before this is over I’ll get the opportunity to play poker with Roger Stone.

The other post Stone reacted against — and he reacted even more aggressively — was this post focusing on Don McGahn’s history of helping Trump’s people get out of campaign finance pickles.

To be fair to rat-fucker Roger, the post actually laid out how Don McGahn has been covering for Trump’s campaign finance problems for seven years, not just Roger’s.

Of significant import, that history started in the follow-up to events from 2011, when Trump’s then-fixer, a guy named Michael Cohen, set up a presidential exploratory committee using Trump Organization funds. Democrats on the FEC believed that violated campaign finance law, but a guy named Don McGahn weighed in to say that FEC couldn’t use public reporting to assess complaints.

During McGahn’s FEC tenure, one of those he helped save from enforcement action was Trump himself. In 2011, when the future president-elect was engaged in a high-profile process of considering whether to enter the 2012 race for the Republican presidential nomination, Trump was formally accused in an FEC complaint of violating agency regulations. The case was dismissed on a deadlocked vote of the FEC commissioners.

A four-page complaint filed by Shawn Thompson of Tampa, Fla., accused Trump of illegally funneling corporate money from his Trump Organization into an organization called ShouldTrumpRun.com. McGahn and fellow FEC Republicans Caroline Hunter and Matthew Petersen voted to block FEC staff recommendations that Trump be investigated in the matter—designated Matter Under Review (MUR) 6462.

Ultimately, Trump opted not to run for president in 2012. Nonetheless, FEC staff attorneys concluded his activities before that decision may have violated campaign finance rules regarding money raised to “test the waters” for a candidacy. A staff report from the FEC Office of General Counsel, based largely on news articles and other documents about Trump’s flirtation with running for president—including Trump’s own quoted statements— recommended that the commissioners authorize a full FEC investigation backed by subpoena power.

FEC Democrats voted to pursue the recommended probe, but the votes of McGahn and the other FEC Republicans precluded the required four-vote majority needed for the commission to act.

McGahn and Hunter issued a “ statement of reasons” explaining their votes in the Trump matter in 2013. The 11-page statement blasted FEC staff attorneys in the Office of General Counsel for reviewing volumes of published information regarding Trump’s potential 2012 candidacy in order to determine whether to recommend that the FEC commissioners vote to authorize a full investigation. McGahn and Hunter argued that the FEC counsel’s office was prohibited from examining information other than what was contained in the formal complaint submitted in the case.

The Office of General Counsel shouldn’t be allowed to pursue an “unwritten, standardless process whereby OGC can review whatever articles and other documents not contained in the complaint that they wish, and send whatever they wish to the respondent for comment,” the Republican commissioners wrote.

In the context of rat-fucking Roger, in 2016, McGahn succeeded in getting a bunch of Democrats’ lawsuits against Stone’s voter suppression efforts in swing states thrown out.

But the history these sleazeballs all share is relevant for a reason explicitly raised in the SDNY Cohen filing last night. In the middle of the most shrill passage in the entire shrill filing (one that also uses language that might be more appropriate in — and is likely to eventually show up in — a ConFraudUs charge), SDNY notes that Cohen can’t play dumb about campaign finance law because of his 2011 run-in with the law.

Cohen’s commission of two campaign finance crimes on the eve of the 2016 election for President of the United States struck a blow to one of the core goals of the federal campaign finance laws: transparency. While many Americans who desired a particular outcome to the election knocked on doors, toiled at phone banks, or found any number of other legal ways to make their voices heard, Cohen sought to influence the election from the shadows. He did so by orchestrating secret and illegal payments to silence two women who otherwise would have made public their alleged extramarital affairs with Individual-1. In the process, Cohen deceived the voting public by hiding alleged facts that he believed would have had a substantial effect on the election.

It is this type of harm that Congress sought to prevent when it imposed limits on individual contributions to candidates. To promote transparency and prevent wealthy individuals like Cohen from circumventing these limits, Congress prohibited individuals from making expenditures on behalf of and coordinated with candidates. Cohen clouded a process that Congress has painstakingly sought to keep transparent. The sentence imposed should reflect the seriousness of Cohen’s brazen violations of the election laws and attempt to counter the public cynicism that may arise when individuals like Cohen act as if the political process belongs to the rich and powerful.

Cohen’s submission suggests that this was but a brief error in judgment. Not so. Cohen knew exactly where the line was, and he chose deliberately and repeatedly to cross it. Indeed, he was a licensed attorney with significant political experience and a history of campaign donations, and who was well-aware of the election laws. 11 In fact, Cohen publicly and privately took credit for Individual-1’s political success, claiming – in a conversation that he secretly recorded – that he “started the whole thing . . . started the whole campaign” in 2012 when Individual-1 expressed an interest in running for President. Moreover, not only was Cohen well aware of what he was doing, but he used sophisticated tactics to conceal his misconduct.

11 Cohen was previously the subject of an FEC complaint for making unlawful contributions to Donald Trump’s nascent campaign for the 2012 presidency. The complaint was dismissed for jurisdictional reasons, but it certainly put Cohen on notice of the applicable campaign finance regulations. See In the Matter of Donald J. Trump, Michael Cohen, et al., MUR 6462 (Sept. 18, 2013). [my emphasis]

To the extent that Cohen and his sole client, Individual-1, committed campaign finance crimes in 2016 — especially the corporate funding of campaign activities — they can’t claim to be ignorant, because they only narrowly avoided proceedings on precisely this point in 2013.

That’s all the more true given that that very same FEC commissioner was their campaign lawyer.

Now, any discussion about Cohen’s knowledge of campaign finance law in this instance is one thing if you’re talking whether SDNY will charge Trump and his company with conspiracy to violate campaign finance laws because Cohen bought off several women. But then there’s the matter of SuperPACs that illegally coordinated with Trump Org, and other dark money groups — including Stone’s — that coordinated with the campaign. Given that the donation Manafort lied about to Mueller is reportedly from Tom Barrack’s SuperPAC (along with his lies about whether he and Barrack met with Konstantin Kilimnik right after he got fired), that may be a campaign finance problem as well. Kilimnik partner Sam Patten has already pled guilty for using a straw donor to hide the foreign oligarchs ponying up to attend Trump’s inauguration, so that’s a second campaign finance guilty plea from people close to Trump and his aides, in addition to Cohen’s.

And all that’s before you get to the big one, Russia’s direct assistance to the campaign as part of a quid pro quo, and the stakes of whether any of the players can be said to know campaign finance law go up.

In short, Trump’s campaign was a serial campaign finance disaster in 2016, even in spite of having former FEC commissioner Don McGahn at their legal helm. And even if they weren’t running these legal questions by McGahn, Individual-1 and his fixer, at least, were also (as the government has already now alleged) “on notice of the applicable campaign finance regulations.”

Remember: After meeting with prosecutors for 20 hours late last year, McGahn had something around another 10 quality hours with Mueller’s prosecutors. The assumption has always been that those interviews were exclusively about the cover-up (though this May AP story on Tom Barrack’s own questioning describes that, “Investigators have for months been inquiring about the Trump campaign’s finances and compliance with federal election law,” and it doesn’t even include a single one of the crimes laid out here).

But it’s highly likely McGahn has given significant testimony about the (campaign finance) crime.