Trump’s 200 Million Inauguration Visitors and $15 Million Net Worth: The Scale of His Border Lies

Tonight, Trump will take over the airwaves to lie about the southern border in what will either be a last ditch effort to persuade Senate Republicans to stay the course supporting his temper tantrum, or will include a declaration of emergency that would pave the way to reopen government while saving face, all while creating an unbelievably dangerous precedent in the process.

Yesterday, NBC reported just how enormous are the lies the Trump Administration is telling about the southern border.

It describes that while the Administration claims to have stopped 4,000 known or suspected terrorists last year, in reality, CBP stopped just six.

U.S. Customs and Border Protection encountered only six immigrants at ports of entry on the U.S-Mexico border in the first half of fiscal year 2018 whose names were on a federal government list of known or suspected terrorists, according to CBP data provided to Congress in May 2018 and obtained by NBC News.

That number six is itself an exaggeration. In a piece predicting that, “the Intelligence Community is almost certainly not able to stand publicly behind what the White House and DHS are saying,” former National Counterterrorism Center Director Nick Rasmussen explains what (he correctly suspected) that number represents: visa denials based on a possible link to terrorism.

[T]hose visa denials or SIA encounters hardly equates to disruption of a terrorist plot or the “capture” of a known terrorist. Our watchlisting system is predicated on a carefully calibrated risk management approach. When the intelligence community acquires information that points to a potential link to terrorist activity, individuals are not permitted to travel to the United States. But it should not be assumed that every individual who was denied the opportunity to enter the U.S. because was in fact a would-be terrorist intent on doing us harm.

Plus, the 4,000 number equates to all such stops, not just those on the southern border.

In other words, the White House has been telling an unbelievable exaggeration to attempt to ratchet up fear to justify Trump’s tantrum.

It is, even among Trump’s fantastic lies, remarkable. Trump used a number, 4,000, that is actually 666 times higher than even a conservatively high number, 6. 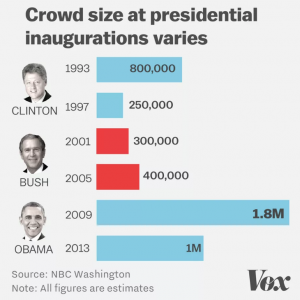 To show just how big a lie it is, I calculated what two of Trump’s other most famous lies, exaggerated on such a scale, would be.

In an effort to avoid looking inadequate as compared to President Obama, whose inauguration had record crowds (much to the chagrin of those us of caught in the Purple Tunnel of Doom), Trump claimed more people attended his inauguration than ever before, meaning more than the 1.8 million who attended Obama’s first inauguration. In reality, the number was likely between 300,000 and 600,000. Take the smaller of those two numbers, exaggerate by as much as Trump is exaggerating the threat of terrorist infiltration on the southern border, and he’d have to claim 200 million people would have attended his inauguration, many more times the crowd Obama got.

Or take his net worth, another of his most epic lies.

Trump has claimed his net worth is $10 billion; the company, too, claims to make that much in a given year. Last year Forbes calculated Trump’s net worth was actually closer to $3 billion.

But if we take Trump’s exaggerated claim of $10 billion, and assumed he is exaggerating by the scale that he’s exaggerating the threat at the southern border, and it’d say his real net worth was just $15 million.

I mean, that’d make Mitt Romney far richer than Trump. Richard Blumenthal, too, would be worth more than the President. The Senate might not even let a pauper like that join their club! According to some calculations, Nancy Pelosi would even be worth more — in monetary, and not just human, worth — than Trump if he exaggerated this much.

The point is this lie is not just egregious and fact-free. It is, even among Trump’s lies, a whopper.

And Trump will go on teevee tonight to try to spread lies on an epic scale.