Stays: Another Reason for the Shutdown?

This is a very short post; I needed to put something up here after this popped up in my Twitter feed: 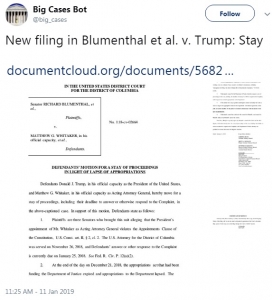 Link to the stay.

This is the suit filed by three senators (Blumenthal, Whitehouse, Hirono) against Trump and Matthew Whitaker with regard to Whitaker acting as attorney general (Blumenthal et al. v. Trump 1:18-cv-02664).

1. Plaintiffs are three Senators who brought this suit alleging that the President’s appointment of Mr. Whitaker as Acting Attorney General violates the Appointments Clause of the Constitution, U.S. Const. art. II, § 2, cl. 2. The U.S. Attorney for the District of Columbia was served on November 26, 2018, and Defendants’ answer or other response to the Complaint is currently due on January 25, 2018. See Fed. R. Civ. P. 12(a)(2).

The plaintiffs have already filed a memorandum in opposition.

Given Whitaker’s purported current role in the Department of Justice, acting as attorney general after Jeff Session’s departure, how is this requested stay attributed to the government shutdown not an attempt to obstruct justice in any investigation in which Trump is a defendant, target, or subject?

We’re looking at you, GOP Senate, especially Mitch McConnell. Are you part of the obstruction, too?