Yesterday, the Mueller team submitted a highly redacted filing and set of exhibits substantiating their claim that Paul Manafort continued to lie during the period he was supposed to be cooperating with prosecutors.

Even aside from the heavy redaction, the filing is a bit confusing because it doesn’t follow the same order as the two prior filings (Mueller, Manafort) on Manafort’s lies and its parallel structure is weak. But it appears to be structured like this:

Also note the exhibits (which are mostly redacted) restart counting with each new section, as noted above. That said, descriptions of what appear to be the polling-sharing exhibits are in entirely redacted footnotes. The highest number exhibit pertaining to Manafort’s interactions with Kilimnik referred to in unredacted form in the filing is 221 (which pertains to the Ukraine peace plan), but the Kilimnik-related exhibits go through exhibit 238, with a skip at exhibit 237. By order, the discussion on page 21-22 of its filing almost certainly pertains to Manafort’s lies about sharing polling data, but the government isn’t even going to describe what are the 16 or 17 exhibits they have substantiating it.

Nevertheless, both the discussion and the exhibits make it clear that — contrary to Konstantin Kilimnik’s claims to the contrary — Manafort remained involved in efforts to push a “peace” plan in Ukraine at least until May 2018. For example, in February 2018, Manafort authored a document on a “New initiative for Peace.” 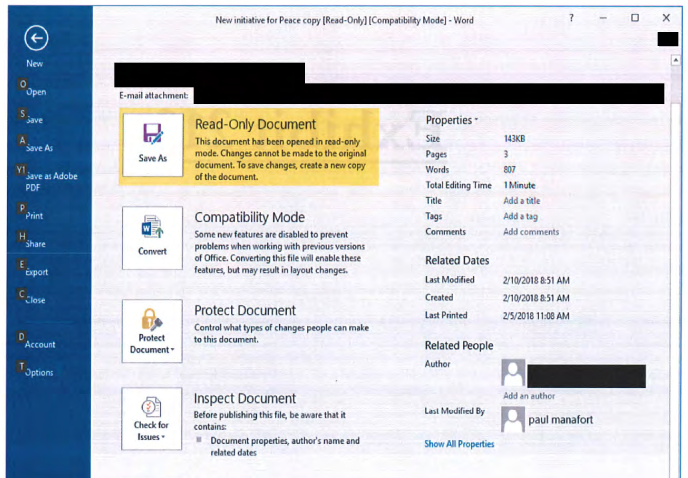 And this email appears to substantiate a discussion of Manafort’s active involvement in Ukrainian peace deals. 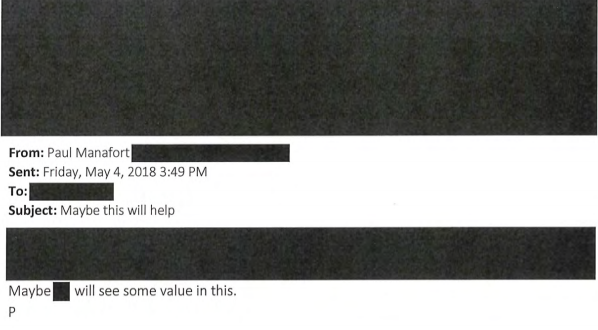 Significantly, the government seems to have sprung some of this on Manafort when he appeared before the grand jury (so therefore was in a position where his lawyers could not serve as direct witnesses). The government treats this October 26 grand jury appearance separately in their Ukraine discussion, and notes that Manafort “was asked in the grand jury about his work in 2018” on the subject. He had “not mentioned” it “during any of his twelve interviews and had said he had last discussed” what must be the peace initiative “in spring 2017” (possibly at the meeting in Madrid he also lied about). A witness testified that he was primarily responsible for drafting this “based … on directions given to him by Manafort” — though it’s clear that Kilimnik continued to offer his feedback, as an attachment to the above email reflects.

Remember: the government’s first public accusation that Kilimnik was a Russian agent came in a filing submitted in March 2018. Manafort continued to conspire (by witness tampering) and pitch peace deals with Kilimnik for over a month after that.

And that makes Manafort’s ongoing communications with the Administration more interesting. On that issue, too, Manafort was “confront[ed] with documents” during a grand jury appearance, at least two of which involved attempts to contact the Administration in May 2018, when we know Manafort was still working on a Ukraine peace plan. Two of the exhibits supporting ongoing efforts to reach out to the Administration included in yesterday’s filing date to May 2018. There’s a May 2018 Word document that Manafort authored and edited that discussed targeting (but that may also incorporate a Ukrainian tax filing). 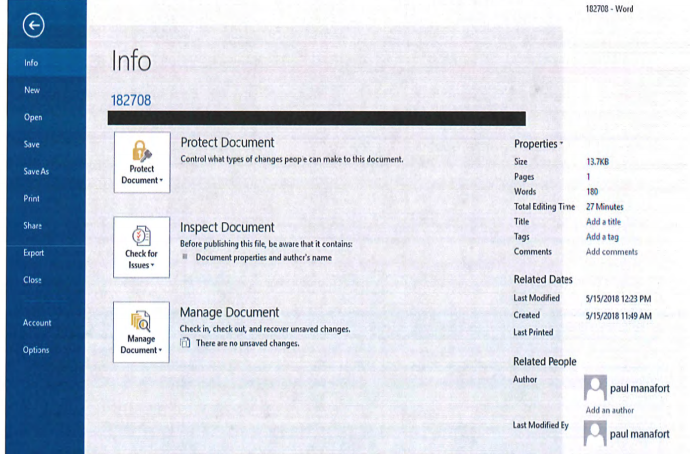 The other document substantiating ongoing efforts to reach out to the Administration was a text exchange in the weeks after this document reflecting “targeting” got written, in which Manafort invited someone to use his name with Trump.

The government is clear in its filing that,

This is not a complete listing of such contacts Manafort had with Administration officials. Further, for the purpose of proving the falsity of Manafort’s assertions in this section, the government is not relying on communications that may have taken place, with Manafort’s consent, through his legal counsel.

It also refutes Manafort’s claim that, “Mr. Manafort was well aware that the Special Counsel’s attorneys and investigators had scrutinized all of his electronic communications” because “Mr. Manafort voluntarily produced numerous electronic devices and passwords at the request of the Government” by revealing that it had found more than 10 devices or documents for which Manafort hadn’t shared a password.

That is, there may be 10 documents or devices that Manafort tried to shield from the government, but which Manafort’s legendarily shitty OpSec failed to protect. If that’s true, they’re not telling him — or the public, yet — what he was trying to shield.

Indeed, unless I’m missing them or the discussions were redacted, the details provided in this filing address only lies told at about half of Manafort’s meetings with prosecutors (September 20, 21, October 1, 16) and a grand jury appearance on October 26 where they sprung both the 2018 peace efforts and 2018 communications on him. I believe there are no unredacted details about his three meetings on September 25, 26, and 27 or his grand jury appearance on November 2, a period when Mueller was also focused closely on Roger Stone. This filing doesn’t tell us whether Manafort told the truth in those sessions.

In any case, consider how insane this is. Manafort was charged with lying (and getting other people to lie) about his work with Ukraine on October 27, 2017. And yet Manafort appears to have continued that Ukraine-related work for another seven months, while he was supposed to be preparing for his first trial for evading taxes on the funds he earned in Ukraine. And while the government is not telling us what Manafort tried to engage the White House about during that period, timing-wise it may well be that he continued to try to engage the President’s top advisors in this period.

Some of the other evidence in Mueller’s filing makes it clear Manafort was still trying to clean up what appear to be clear campaign finance violations from the 2016 election (both in the form of illegal donations from foreigners and coordination between a SuperPAC and the campaign) as recently as last month. He has long known that Mueller has been watching every step of these parallel efforts. But he doesn’t seem to care.

Update: I’ve updated the post to reflect — as per several comments — that among the 10 things Manafort withheld passwords for may be devices, and so may reflect a much wider universe of documents that he doesn’t know whether they’ve accessed or not.

tweets from our circle
emptywheel@emptywheelRT @MaggieAstor: Three days after Dobbs, an Indiana OB-GYN got a call from a child abuse doctor in Ohio, which had banned abortion after si…28 minutes ago02 July 2022
bmaz@bmazRT @B52Malmet: Dogs sniffing pregnant women at airports? How sick is this?1 hour ago02 July 2022
bmaz@bmazRT @oliviacpaschal: this is so embarrassing pic.twitter.com/rixhDH1FM41 hour ago02 July 2022
Ed Walker 🍞🌹💉💉@MasaccioEWRT @alyssaharad: This money that the Democrats keep asking me for--what do they do with it, anyway? No, really why have campaigns gotten so…6 hours ago02 July 2022
Ed Walker 🍞🌹💉💉@MasaccioEWRT @joncoopertweets: July 4th is a great time for young people to talk to their parents and grandparents about why voting Republican threat…6 hours ago02 July 2022
Jim White@JimWhiteGNVRT @TimGators: Fuck the @GOP twitter.com/GaviBegtrup/st…8 hours ago02 July 2022
Jim White@JimWhiteGNVRT @TheOnion: Nation Unable To Enjoy Baseball Without Dozens Of Pitchers Hitting .124 bit.ly/3y1sC1W pic.twitter.com/k3nNYsuyFQ12 hours ago01 July 2022
RayneToday@raynetodayJust as we hope every same-sex couple understands how degraded and humiliated uterus-endowed people feel having the… twitter.com/i/web/status/1…2 days ago30 June 2022
RayneToday@raynetodayRT @mike10010100: OHHHH *that's* why people are desperately spreading anti-Biden shit.2 days ago30 June 2022
RayneToday@raynetodayFeels like a tipping point has been reached. twitter.com/Acosta/status/…3 days ago28 June 2022
RayneToday@raynetodayRT @girlsreallyrule: Michael Stenger, who served as the Sergeant at Arms for the United States Senate during January 6 riot at the US Capit…4 days ago28 June 2022

The Lady (Trump’s Tantrum) or the Tiger (GOP Senators Get Spines) [UP... William Barr’s Asymmetric Confusion about Shitty Mueller Reporting