Rudy Claims Credit for Peter Carr’s Correction of BuzzFeed, Which Had the Goal of Tamping Down Impeachment Talk 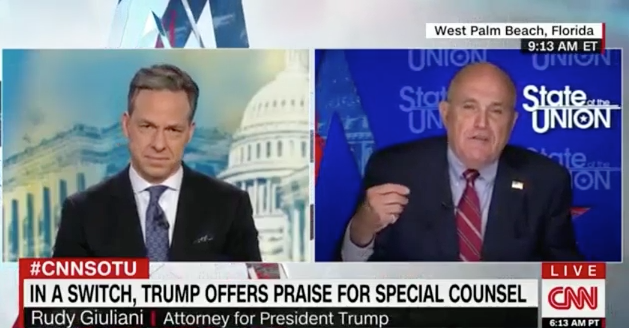 In this post, I suggested that Rod Rosenstein’s call to Mueller’s office to see if they were going to release a statement pushing back against Buzzfeed’s story on Michael Cohen’s testimony might be a violation of SCO regulations protecting against “day-to-day supervision” by DOJ.

In his appearance on Jake Tapper’s show today, Rudy Giuliani (starting at 14:25) appears to take credit for SCO’s statement. After agreeing with Tapper that the NYT had corrected their claim that Paul Manafort had shared polling data with Konstantin Kilimnik with the intent that it in turn get shared with two Ukrainian oligarchs he worked for, he noted that the NYT had not issued the correction on their own. He then said that the Special Counsel’s office had not, either.

Rudy: Originally the NYTimes ran with the story [about Paul Manafort sharing polling data with Konstantin Kilimnik] — again, fake news — that he shared it with a Russian, not true. [note: actually it is true, because Kilimnik himself is a Russian citizen]

At the very least, this undermines WaPo’s claim that Mueller already had a correction of Buzzfeed in the works before Rosenstein’s office called.

In the advanced stages of those talks, the deputy attorney general’s office called to inquire if the special counsel planned any kind of response, and was informed a statement was being prepared, the people said.

Worse still, it seems to suggest he or someone from the White House was involved.

The WaPo story suggested that the statement was issued because Democrats were discussing impeachment.

[W]ith Democrats raising the specter of investigation and impeachment, Mueller’s team started discussing a step they had never before taken: publicly disputing reporting on evidence in their ongoing investigation.

I’ve since heard the same.

It is not appropriate one way or another to issue a statement that otherwise would not have gotten made solely to tamp down discussion about impeachment — as opposed to reestablish what Special Counsel claims it can prove with regards to Cohen’s lies. If Trump suborned perjury about his own doings with Russia — and Congress already had abundant evidence that he had done so before Buzzfeed’s story — then that is grounds to discuss impeachment. That is a proper function of Congress. It is not the function of the Deputy Attorney General’s office to suppress perfectly legitimate discussions of impeachment.

But if the White House or Trump’s personal lawyer demanded that DOJ interfere in the day-to-day supervision of Mueller’s office with the specific goal of silencing talk about impeachment, as Rudy seems to suggest, that is a far more egregious intervention. That would mean Rosenstein’s office (either with or without the intervention of Big Dick Toilet Salesman Matt Whitaker) did what they did because Trump demanded it, which led them to take action that is arguably outside their permissible role with Mueller, all for the political purpose of squelching legitimate congressional discussion about impeachment.