If It’s The Weekend, It Must Be Golf

It’s Saturday. This must be our time to gaze with longing on the verdure only golf courses grow — and by verdure I don’t mean the fairways, tees, or greens.

My father learned to play golf when I was a toddler living out west. It was a way for a geeky dude who was neither white nor monied nor born in California to inject himself into corporate culture. He won’t admit to it but belonging by playing with guys from work did this for him — a little brown dude from an impoverished background became one of them if only as long as he strove to beat their asses on the golf course.

Golf has been one of only two pricey hobbies my father had. The other has been rebuilding vehicles but the means by which he did the rebuilding was so inexpensive — scrabbling for used parts, reading manuals in libraries — my mom didn’t mind the expense. She’d just roll her eyes as he’d wander off to tinker in the garage during the winter months.

Golf wasn’t quite the same. Clubs, bags, balls, shoes, attire, tee times, transportation, all these things couldn’t be done on the cheap. He played twice a week at least during warmer months; once during the week with a league, at least once on weekends. We kids loved it when he played on Sundays as well as Saturdays because it meant four hours without dad driving us bonkers with some yard work or maintenance chore. Dad’s playing golf? Woohoo! Flip on the television and make like a vegetable for those precious four hours.

I can’t imagine what it must have been like to be the Trump kids. Imagine a father who never really decompresses because his favorite past time is also his business. There’s no escape, no relief. While I condemn Donnie Jr.’s wretched hobby killing animals for sport, I can understand why he does it now. 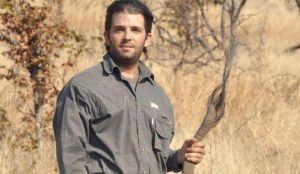 There’s something very Oedipal for Donnie Jr. about traveling a long way from his father’s sphere and cutting the tail off a large-assed, slow-moving beast, if you think about it.

Imagine how the Trump’s kids’ father’s relationship to golf must have skewed their perceptions about so many things.

Because of my dad I’d grown up seeing golf as decompression time and a means to hang with co-workers though as a woman this had a slightly different utility. It also became a way to get to know in-laws who were hardcore golfers.

And it was the in-laws who changed my perception of golf, and of money.

My dad never belonged to a club. He’s always played at public courses or joined leagues which didn’t require a club membership. As I learned to play and began to golf regularly, I didn’t join either. It simply never occurred to me to join a club until I began playing with in-laws.

They were members, and members at clubs across the country. They’d been members their entire adult lives at the local country club and then they joined courses in Florida. This was a completely different experience for me; I can only liken it to feeling like Danny Noonan in Caddyshack, knowing one’s way around golf clubs but not the club.

(An aside: There’s something here about belonging to a tribe and being an outsider that I can’t quite wrap words around. Keep it in mind as you think about the narcissist Donald Trump and his origins.)

But even my in-laws’ experience, as informative as it was for me, wasn’t Trumpish. It was still a social experience which overlapped with business only because their first membership was in a small town where anybody who owned a business had a social membership if not a full golf membership at the country club. A small business owner would meet both vendors and customers alike over drinks or golf all the time, or dinner and dancing at social events during long, cold winters. But there was still some separation between business and pleasure once they left the country club. There was some greater social obligation besides helping other club members; these people dug each other out of snow banks and babysat each others’ kids. They went to the same churches and fundraising potlucks.

Not so for the Trumps, and increasingly so as Donald Trump invested less money in real estate developments and more into golf course-centered developments.

Look at how Trump’s relationships are characterized. In advance of Brett Kavanaugh’s nomination he spoke with “friends and some external advisors” about his choice; at Mar-a-Lago he’s consulted with a “friend and confidante” who “roped in two other friends” to weigh in on Veterans Affairs. There’s no daylight between the people he considers his friends and the members of his golf course clubs, nor external advisors for that matter. How can the public tell them apart without a score card?

In the social circle where golf course and country club memberships are the norm, they really don’t think of the membership fees as access as those outside the circle do. They treat it like ownership in a condominium, and in a way it is — ownership of membership status is an asset which can be sold or passed on to heirs and assigns. There’s generally a cap on memberships in a club — what would be the point if there was no limit to the people who could join? The facilities could be overwhelmed.

Unlimited membership numbers would also reduce the value of the club’s cachet; exclusivity adds value to membership by limiting supply.  It’s Business 101, baby, among the very first things taught in B-school’s indoctrination: if the supply decreases, the price increases. This circle doesn’t even say this; it’s the air they breathe, in their genes.

Trump’s friends don’t see the problem with his consulting them and allowing them to weigh in on governance because they are nearly family — they share this same air, possess the same genes.

Those of us on the outside see this differently. Now we see a family like that in organized crime. We see people who do things for each other, take care of each other, by granting access to resources because of their invested relationship and common interests.

But those resources aren’t theirs — they’re ours.

We fund the Veterans Administration and Veterans Affairs. We elect people who legislate the means by which these functions are administered. We did not elect Ike (who shot a 73, nice game on the back nine) or Bruce (had to take a drop on that last hole, but a nice round), or Marc (developed a nasty slice, needs to spend some time with the club pro) to oversee and direct these public services.

We know absolutely dick about these three guys except that they are friends of Trump and members at Mar-a-Lago.

I made up the modifiers about their golf games but you can see how this stuff works in their world. We’re just abstract fungibles to them, like the stray leaf to be brushed off the 18th green so as not to come between the ball and the cup.

Even Trump’s kids are just abstracts, valued only when they have something to contribute to the rest of the club family.

Hold this last thought about the abstract fungibles. We may start our next round on that tee.