Urgent, Urgent: Head to the Phones

I can’t help it. Trump’s so-called national emergency made these lyrics pop into my head:

…You’re not warm or sentimental
You’re so extreme, you can be so temperamental
But I’m not looking for a love that will last
I know what I need and I need it fast…

He needs his bloody wall and he needs it fast, on the heels of his usual dose of projection.

The real emergency is Trump himself. If you only caught snippets of his speech you missed out on the real horror. Here’s an excerpt (the entire speech can be found at The Atlantic, do read it in its entirety): 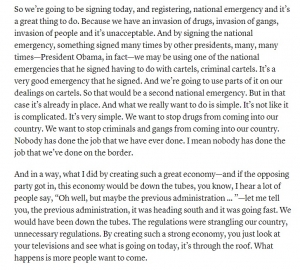 What the almighty fuck? If this rambling nonsense is what FBI’s former deputy director Andrew McCabe experienced on the phone and in person, you can understand why he would have been wigging out about this person’s capacity to perform his Article II duties.

But this isn’t the first time Trump has spoken and acted this way. One only needs to revisit journalist Daniel Dale’s so-patient coverage of Trump including his live tweeting and dissecting each of Trump’s public speeches. (I don’t know how Dale does it, though it may be his tolerance is bolstered by his Canadian citizenship and working for the Toronto Star.)

Not only is Trump’s presidency questionably legitimate, not only is the man an inveterate liar and an unapologetic freeloader milking the presidency for profit, he is mentally incompetent. He’s unable to string together a complete sentence if more than four words long.

His declaration of a national emergency is all the more untenable. Though lawsuits have already been filed — including Public Citizen on behalf of landowners and the ACLU — we can’t hope that the courts will see the declaration as unsustainable under law. We have to make it clear to Congress they must do their jobs and ensure the emergency is unapproved.

Representatives Joaquin Castro and Jerry Nadler are drafting a joint resolution to this end; though it’s expected to pass the House, the GOP may bottleneck the resolution.

This is where we need to come in and make it clear the GOP cannot continue to fail its sworn obligations under the Constitution. The GOP’s Class II senators in particular must be held to account and told they own this if they do not push back and disapprove the non-emergent emergency.

This is what the hollow men approve if they don’t stop this insanity: 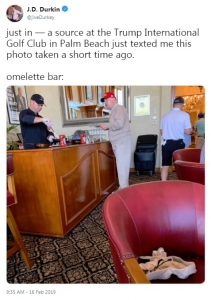 Just make your calls, leave voicemails; Congressional switchboard number is (202) 224-3121. Do reassure Democratic representatives and senators they have our support on disapproval. Need a script? @Celeste_P has you covered here.