All the News Fit to Treat Badly 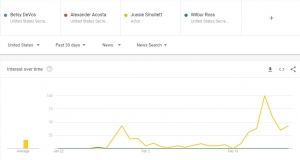 There have been numerous stories this week about the Trump cabinet which received slapdash coverage. All of them are scandals and should have resulted in the firing or resignation of two, possibly three cabinet members.

And yet the public is deluged with and seeking more information about a celebrity’s personal screw-up resulting in prosecution — a story which has no real impact on their personal lives. The public doesn’t appear to know how very badly Trump’s cabinet members are treating the public’s trust, or the risk posed by turning a blind eye to these cabinet members’ bad faith and corruption as nearly all of them are in the line of presidential succession.

In short, the public isn’t being informed about real news.

If the public is asking about a celebrity, leave it to celebrity gossip sites to answer. The public needs reporting about these failing cabinet members, and they need to know these stories are far more important than celebrity buzz, affecting the country’s ability to function normally. If the public isn’t asking about these cabinet members, it may be a sign that the media is failing them and/or the trend data may be manipulated.

How much do you or your family members and friends know about Wilbur Ross’s repeated lies about his personal holdings? The Office of Government Ethics refused to certify his most recent financial disclosure statement because he didn’t sell stocks that he said he’d sold. This has been going on since he became Commerce Secretary. His work in that role has been dismal as it is, not to mention his questionable relationship to a bank in Cyprus. But to lie and lie repeatedly to the government about his personal finances? There’s no excuse for his not knowing what assets he’s holding because he has to file a tax return reflecting ownership, earnings and subsequent profits and losses.

There’s also no excuse for news media to treat Ross’s lies as if they are perfectly normal for the person who is eighth in line of presidential succession and responsible for fostering, promoting, and developing the foreign and domestic commerce of the largest economy in the world. News outlets should be asking the White House every damned day why Ross hasn’t been booted out the door.

How much do you or your family members and friends know about former federal prosecutor and current Labor Secretary Alexander Acosta’s role in the ridiculously light sentence human trafficker Jeffrey Epstein received? Or Acosta’s role in violating the Crime Victims’ Rights Act, directly affecting at least 30 of Epstein’s victims?

News media paid a little more attention to this case because the crimes underlying it were of prurient interest. But they have already forgotten justice for the victims, blowing off Acosta’s continued employment in a role overseeing workplaces where human trafficking may occur. Acosta is right behind Ross in the presidential succession lineup. News media should likewise ask why Acosta still has a job as Labor Secretary right after they ask about Ross’s continued employment.

How much do you or your family members and friends know about former Interior Secretary Ryan Zinke’s alleged lies to federal investigators regarding disapproval of Native American casinos? This wasn’t the only probe Interior Department Office of Inspector General had been looking into; it’s the one which has been referred to a grand jury. What other damage may Zinke have done while he was at Interior? What continues under acting Interior Secretary?

Zinke had been two slots ahead of Ross in the presidential succession lineup. At least Zinke is no longer with the administration, unlike Ross and Acosta, or Betsy DeVos.

A staffer for Education Secretary DeVos attempted to obstruct investigation into DeVos’ restoration of approval for a college accreditor by trying to remove the acting inspector general looking into the re-approval. It’d be nice to know if DeVos instructed her deputy secretary Mitchell Zais to remove Sandra Bruce because was continuing her investigation, or if Zais tried this on his own. This is yet another cabinet-level scandal the public doesn’t know enough about compared to a celebrity story.

DeVos has been a threat to public education since her approval hearing when she suggested guns were needed in the classroom to protect against bears. She’s a threat to more than education as 13th in line of succession for the presidency, too, given there are open slots for Secretaries of Defense and Interior. College students struggling with tuition debt and students who’ve participated in active shooter drills would love to know why DeVos still has a job. They ought to know someone is asking every day.

And Secretary of Transportation Elaine Chao couldn’t let these four cabinet secretaries have all the fun. She may have been improperly coordinating with our glorious Senate Majority Leader Mitchell McConnell — also her spouse — to ensure their home state Kentucky received a lion’s share of transportation projects.

Fortunately Chao is not in the line of presidential succession because she is foreign born.

Fortunately, her spouse McConnell isn’t in the succession lineup at all.

Unfortunately, these were just a handful of stories which should have ranked higher in the mind of the public and the media’s effort.