Yesterday, the government submitted a notice clarifying the record on the Paul Manafort breach determination. The bulk of the filing describes that, after reading about the dispute in public reporting on the topic, Rick Gates provided additional information on the topic that may corroborate part of Manafort’s story.

The new Gates information necessarily pertains to the sharing of polling data. That’s clearly true because it discusses all the same evidence the government used to substantiate Manafort’s lies about the polling data:

Here’s where that evidence shows up in the filing: 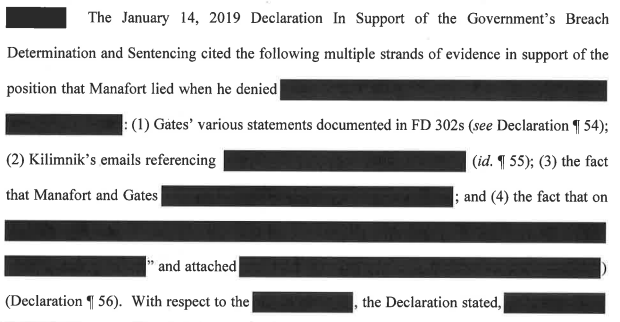 In addition, that passage cites paragraphs of the declaration, ¶55 and ¶56, that by structure necessarily deals with the sharing of poll data.

I say that in part because the order in which the corroboration was treated, with Manafort’s email coming last. In addition, this passage seems to reflect Gates using the poll data to prepare for a meeting.

As to this passage, I suspect it clarifies that just one of the oligarchs that Manafort intended to receive the data was Russian — Oleg Deripaska — and that (as Andrew Weissmann appeared to say at one point) the other recipients were his Ukrainian paymasters. 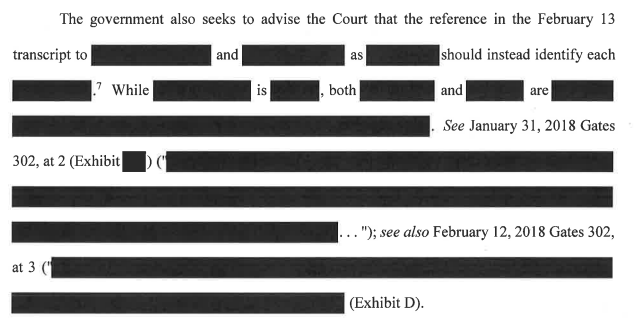 The transcript appears to have been corrected on that point. If that is the only change, it wouldn’t really change the key fact that Manafort shared data with a guy who was a central player in the election year conspiracy.

ABJ hasn’t demanded any additional briefing on this topic, so she may agree with the government that the issue of the email doesn’t otherwise change her ruling. As the government notes, Gates’ self-correction makes him more credible, and suggests the story he is telling — which appears to sustain the same explanation for the August 2 meeting — is as helpful to Manafort as possible, which is not at all.

Update: In her minute order on this (doing nothing about the breach determination), ABJ did indeed order the passage (page 36 line 16) where she discussed the recipients of the data to be corrected, making it virtually certain Manafort shared the data with one Russian and two Ukrainian oligarchs.

The May 18, 2017 Meeting with Trump, Jay Sekulow, and Michael Cohen Come On Down Paul Gosar, The Latest Arizona Embarrassment