That U.S. flights of Boeing’s model 737 Max aircraft were suspended is a good thing, I think we can agree though perhaps not all for the same reasons. I’ve had suspicions about Boeing for some time now and not because of the company’s products or its management. Three things have bothered me and the deadly crash on March 10 has only added to previous concerns.

I’ve noted before that Boeing has been a possible target for stock manipulation; in fact I wrote about my suspicions a year ago:

You can imagine my surprise on December 6, 2016, when then-president-elect tweeted about Boeing’s contract for the next Air Force One, complaining it was too expensive. Was it Boeing the spies were discussing? But the company didn’t fit what I could see in the indictment, though Boeing’s business is exposed to Russia, in terms of competition and in terms of components (titanium, in particular).

It didn’t help that Trump tweeted before the stock market opened and Boeing’s stock plummeted after the opening bell. There was plenty of time for dark pool operators to go in and take positions between Trump’s tweet and the market’s open. What an incredible bonanza for those who might be on their toes — or who knew in advance this was going to happen. …

And while Boeing 737 Max equipment safety was under public debate after Sunday March 10th crash, Trump tweeted this Luddite position on contemporary aircraft complexity on March 12: 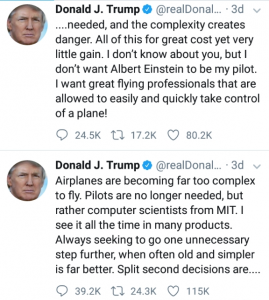 How interesting that he avoided naming Boeing specifically, but at the same time he managed to post the first of these two tweets at exactly 10:00 a.m.; the second tweet didn’t publish for another 12 minutes, leaving those following his tweets closely to assume he was going to discuss Boeing specifically during the interim.

I can’t help think Trump has an ulterior motive with regard to Boeing considering how often he has stepped into their business one way or another since December 6, 2016.

It’d be nice to know who’s been shorting NYSE:BA before his tweets and in which stock exchanges. 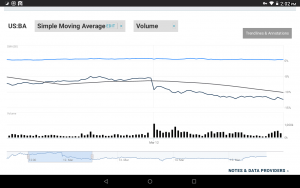 Trump’s personal demands have also affected Boeing directly with regard to system updates. The government shutdown delayed for five weeks work by the Federal Aviation Administration toward certification of a software “fix” for the 737 Max flight control system.

In other words, eight more American citzens traveling on the doomed flight this past weekend may have paid the ultimate price for Trump’s gross incompetence and corruption, not to mention the other truly marvelous human beings lost to the world when that flight met the earth two weeks ago.

Boeing’s business model needs to be revisited, though, if the flight control system “fix” wasn’t treated with adequate urgency based on feedback from Boeing to the FAA. There’s a fundamental question of a product’s safety for its intended purpose if it must have a software update to fly safely but that update is an additional feature outside the product’s purchase agreement and must bought before it can be added. Smells like product liability with a whiff of extortion.

Would we tolerate this business model in other situations where so much is at stake? Imagine your computer’s operating system needs a patch before you can use it — and you must pay for the patch, it’s not included in the licensing agreement for the operating system. Oh, and the computer runs your insulin pump or your pacemaker wihout which you are likely to die.

The FAA as well as Boeing need to be reevaluated based on complaints the government agency is too closely linked to the aerospace company to provide appropriate oversight. The FAA has been relying on Boeing to self-monitor via component safety inspections because the FAA doesn’t have adequate personnel or resources.

Recall recent reports of supply chain vulnerabilities — is it at all possible Boeing components have been as compromised as other military suppliers have been? How would the public know if it has relied on the FAA’s self-inspection “designee program”?

This sounds eerily familiar, like the claims related to firmware updates needed on servers when it was possible the Supermicro motherboard hardware had been compromised.

Treat this as a open thread. We could use a break from what will continue to be a flood of news relate to the Special Counsel’s Office report, especially after the Golfer-in-Chief parks his cart for the weekend and begins shit posting on Twitter in earnest again.