How “Collusion” Appears in the Mueller Report

Because it has been my hobby for the last 2 years, let me remind you that what law enforcement authorities have been investigating — with regards to the efforts of Donald Trump and his associates to optimize Russia’s efforts to help Trump get elected — has been conspiracy, not collusion. To show that Mueller’s report does not comment on whether Trump “colluded” with Russia, I’m going to show how the word “collusion” appears in it.

Mueller was so determined to make this point clear he dedicated an entire section to saying he did not investigate “collusion.”

On page 2 — page 2!! — of the report, Mueller explains they didn’t investigate “collusion,” but instead investigated “conspiracy” and “coordination,” a point I’ve been making for years. 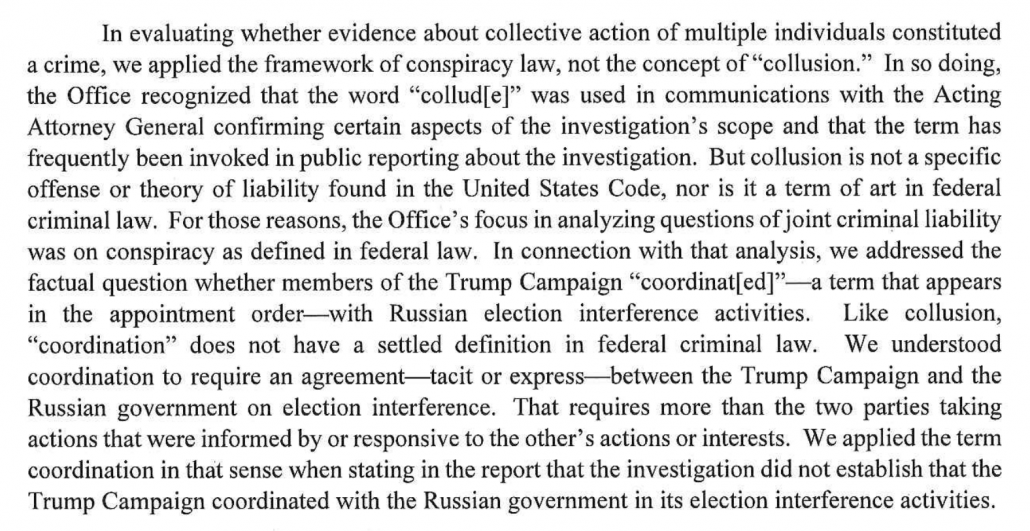 Not “collusion,” but conspiracy

Then there’s the dedicated section where Mueller explains their prosecutorial decisions were not about “collusion,” but about conspiracy.

Trump’s gaslighting about the word “collusion”

Aside from those legal comments, the vast majority of the references to “collusion” in the report catalogue Trump’s usage of the term, such as this description of Trump telling his PDB briefers there was no “collusion.”

There’s the description of how Trump claimed there was no “collusion” in some of the 8 conversations he had with Steve Bannon in advance of firing Jim Comey.

There are the mad tweets claiming there was no “collusion.”

And more tweets about “collusion.”

The “collusion” tweets suffer from no limits of market scarcity.

Then there’s the one citation of Trump’s lawyers addressing “collusion” as opposed to something illegal.

Why would you report on Trump claiming no “collusion”?

Then there’s this reference to a journalist reporting on Trump claiming no “collusion.”

Finally, there is a single reference to reporting using the term “collusion” on the day Comey said they were not investigating that. [shakes head at the headline writers]

In other words, the references to “collusion” in the Mueller Report fall, generally, into two categories. A legal discussion explaining why Mueller was not investigating “collusion.” And a catalogue of the instances where Trump and his surrogates denied that he was guilty of that non-crime.

The Significance of Trump’s Obstruction of Investigation of His Family’s Campaign Finance Crimes, Plural

How “Collusion” Appears in the Mueller Report

Putin’s Ghost: The Counterintelligence Calculus Not Included in the Obstruction Analysis

The Trump Men and the Grand Jury Redactions

The Many Lies and Prevarications of Bill Barr

Putin’s Ghost: The Counterintelligence Calculus Not Included in the Obstruction... Do the Right Thing: Break Some Eggs and Impeach