Giorgi Rtslchiladze believes his honor has been sullied by Robert Mueller.

Rtslchiladze is a naturalized American businessman from Georgia who shows up several times in the Mueller Report.

Also during the fall of 2015, Cohen communicated about the Trump Moscow proposal with Giorgi Rtslchiladze, a business executive who previously had been involved in a development deal with the Trump Organization in Batumi, Georgia.313 Cohen stated that he spoke to Rtskhiladze in part because Rtskhiladze had pursued business ventures in Moscow, including a licensing deal with the Agalarov-owned Crocus Group.314 On September 22, 2015, Cohen forwarded a preliminary design study for the Trump Moscow project to Rtskhiladze, adding “I look forward to your reply about this spectacular project in Moscow.” Rtskhiladze forwarded Cohen’s email to an associate and wrote, “first we could organize the meeting in New York at the highest level of the Russian Government and Mr. Trump this project would definitely receive the worldwide attention.”315 On September 24, 2015, Rtskhiladze sent Cohen an attachment that he described as a proposed “[l]etter to the Mayor of Moscow from Trump org,” explaining that “[w]e need to send this letter to the Mayor of Moscow (second guy in Russia) he is aware of the potential project and will pledge his support.”316 In a second email to Cohen sent the same day, Rtslchiladze provided a translation of the letter, which described the Trump Moscow project as a “symbol of stronger economic, business and cultural relationships between New York and Moscow and therefore United States and the Russian Federation.”317 On September 27, 2015, Rtslchiladze sent another email to Cohen, proposing that the Trump Organization partner on the Trump Moscow project with “Global Development Group LLC,” which he described as being controlled by Michail Posikhin, a Russian architect, and Simon Nizharadze.318 Cohen told the Office that he ultimately declined the proposal and instead continued to work with I.C. Expert, the company represented by Felix Sater.319

313 Rtskhiladze was a U.S.-based executive of the Georgian company Silk Road Group. In approximately 2011, Silk Road Group and the Trump Organization entered into a licensing agreement to build a Trump-branded property in Batumi, Georgia. Rtskhiladze was also involved in discussions for a Trum -branded ro’ect in Astana, Kazakhstan. The Office twice interviewed Rtskhiladze, [redacted]

The details on this second Trump Tower deal show that at some of the initiative for an election season Trump Tower deal came from Trump, not the Russians. This Rtskhiladze deal is noteworthy because he pursued (note the word) deals in the past with the Crocus Group — the Agalarov company — and because Mueller at least suggests he doesn’t entirely buy Rtslchiladze’s representation of the ownership of Global Development Group. Note that Rtskhiladze himself promised Cohen he had ties to the Mayor of Moscow.

An interview with Rtskhiladze is also footnoted in a discussion of Trump Organization’s decision to close out certain business deals in the wake of the election.

After the election, the Trump Organization sought to formally close out certain deals in advance of the inauguration.945

The report doesn’t explain why Trump Org would have any open business deals with Rtskhiladze in November 2016.

Note that Silk Road Group is funded by Kazakh bank BTA group, payments to Michael Cohen from which were one of the reasons Mueller investigated him in the first place (and which has sued Felix Sater for attempting to launder funds through a Trump Tower deal).

It’s the second mention of Rtskhiladze that has sullied his name, according to reports and a letter his attorney sent Bill Barr asking for a retraction (Rtskhiladze’s attorney, A. Scott Bolden, works for the same firm, ReedSmith, that is engaging in a trollish defense of Concord Management; the letter he released to the press is actually a revised version of one he sent the day before).

As part of an explanation of why Jim Comey briefed Trump on the Steele dossier on January 6, 2017, a footnote explains that Rtskhiladze texted Cohen about compromising tapes in October 2016.

112 Comey 1/7/17 Memorandum, at 1-2; Comey 11/15/17 302, at 3. Comey’s briefing included the Steele reporting’s unverified allegation that the Russians had compromising tapes of the President involving conduct when he was a private citizen during a 2013 trip to Moscow for the Miss Universe Pageant. During the 2016 presidential campaign, a similar claim may have reached candidate Trump. On October 30, 20 I 6, Michael Cohen received a text from Russian businessman Giorgi Rtskhiladze that said, “Stopped flow of tapes from Russia but not sure if there’s anything else. Just so you know …. ” 10/30/16 Text Message, Rtskhiladze to Cohen. Rtskhiladze said “tapes” referred to compromising tapes of Trump rumored to be held by persons associated with the Russian real estate conglomerate Crocus Group, which had helped host the 2013 Miss Universe Pageant in Russia. Rtskhiladze 4/4/18 302, at 12. Cohen said he spoke to Trump about the issue after receiving the texts from Rtskhiladze. Cohen 9/ 12/ 18 302, at 13. Rtskhiladze said he was told the tapes were fake, but he did not communicate that to Cohen. Rtskhiladze 5/10/18 302, at 7.

As I read it, the entire point of including this reference is not to substantiate the existence of a pee tape. Rather, it’s to explain why Trump may have believed in the existence of one. It actually provides one explanation that makes Trump’s response to Comey’s briefing (as reflected in Comey’s own notes on it) less incriminating, not least his oblique reference to the Stormy Daniels and Susan McDougal allegations. 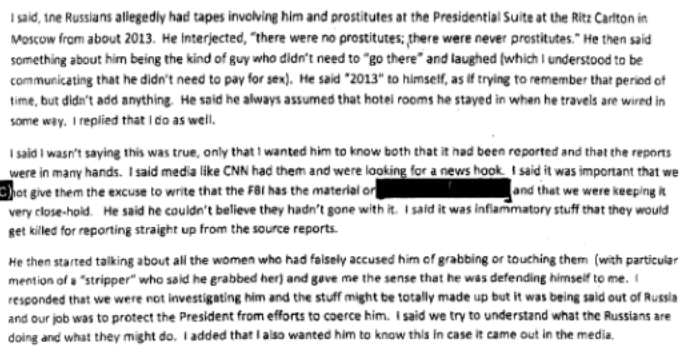 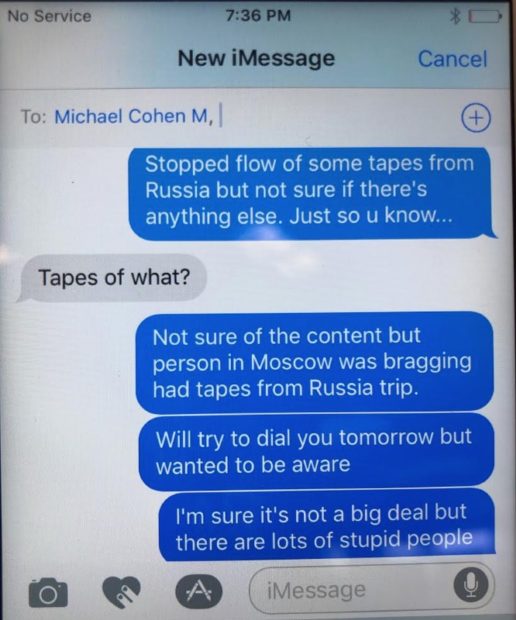 After all, the communications between Rtskhiladze and Cohen on October 30, 2016 would have happened just days after Cohen paid off Stormy Daniels on October 27. It would be unsurprising if Cohen discussed both with Trump at the same time.

Rtskhiladze is  complaining about a number of things. Some of them are fair complaints about how his communications with Cohen were portrayed in the footnote.

That last bullet point, of course, makes zero sense. From there, the letter gets even more self-contradictory. Bolden first claims,

The texts that were excised from the Mueller Report clearly indicate that Mr. Rtskhiladze does not have direct knowledge of what was said at the party in Moscow, which he did not attend. Mr. Rtskhiladze also does not know and cannot identify who allegedly made the statements about the tapes. Furthermore, Mr. Rtskhiladze has never seen the tapes and cannot opine on whether they exist. [my emphasis] 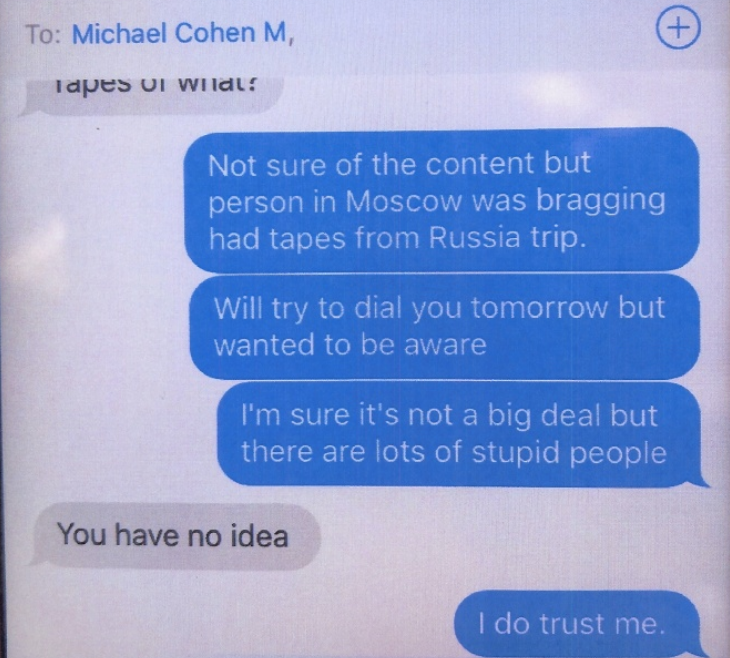 Just a few paragraphs after claiming that Rtskhiladze does not know whether the tapes he assured Cohen he had suppressed existed or not, his attorney then claims that he knew the tapes did not exist.

The suggestion that Mr. Rtskhiladze tried to curry favor with Mr. Cohen, the Trump Organization and possibly President Trump himself by allegedly texting that he had “stopped the flow of tapes from Russia” — knowing all the while that the tapes did not exist — is an outrageous and sensation distortion of the communications between Mssrs. Cohen and Rtskhiladze.

Footnote 112 of the Mueller Report would  have the world believe that Mr. Rtskhiladze is at best a caricature of an idle gossip or, worse, an opportunist with deep ties to the Russian business community2 and privy to untoward conduct by President Trump that Mr. Rtskhiladze and others intended to use to embarrass then Candidate Trump, derail his campaign and/or manipulate him after assuming the elected office. There is not a scintilla of evidence to support these inferences and to suggest otherwise is defamatory. [my emphasis]

Footnote 2 in this passage references the other discussions of Rtskhiladze in the report, which show him telling Cohen he had ties to (among others) the Mayor of Moscow; Rtskhiladze doesn’t contest that he has the ties laid out on those sections.

I mean, Bolden is right: these texts do suggest that Rtskhiladze is either a gossip or, more likely, trying to capitalize on information he claimed to not only know about, but be able to affect.

But he’s not actually offering a less damning explanation for them.

What he has done, however, is to call far more attention to them, all in a way that purports to assail Mueller’s credibility, but instead raises even more questions about the relationship between him and Cohen.

Finally, Bolden issues a non-denial denial of having ties with Crocus.

As I noted above, the report doesn’t claim that Rtskhiladze had a licensing deal, it said he was pursuing one. And there’s nothing about this non-denial denial that might suggest Rtskhiladze heard a rumor that — say — fellow Georgian-American Ike Kaveladze was bragging about some compromising tapes, and he made an effort to chase it down.

So one other possible purpose of Bolden’s efforts to impugn Mueller’s integrity all while bringing more publicity to the incident that he claims makes his client look bad is to try to diminish any ill-will the Agalarovs feel towards Rtskhiladze.

Ultimately, though, Rtskhiladze’s lawyer is making thoroughly contradictory claims about this incident rather than offering a less damning explanation of it.

Update: I engaged with the spokesperson for Rtskhiladze, and specifically mentioned the inconsistency between his claim that he didn’t know if the video existed and that he affirmatively did not know. She said that was a typo, and promised to write the most up-to-date statement, but did not send anything.

The Dispute over the Accusation Maria Butina Is a Spotter Distracts from Clear... Why Did Mueller Include the June 9 Meeting Statement in His Obstruction Cas...