RIP Damon Keith, The Once And Forever Crusader For Justice 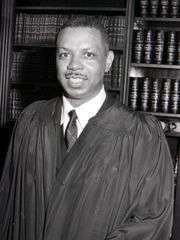 It is with a heavy heart I report that one of the finest, and most righteous, judges in American history has passed away. Judge Damon Jerome Keith was a giant. In a field of giants, Judge Keith stood tall as a special giant. I wish I knew a better and smarter way to put it, but I do not. Damon Keith was not just born on the Fourth of July, but literally tutored by Thurgood Marshall, and never forgot the lessons he learned.

From the Detroit News (Please, do read the whole obituary; you will be glad you did):

Keith, a grandson of slaves whose judicial career spanned five decades and 10 presidents, decided cases that involved some of America’s most controversial political and social issues, from school desegregation to government surveillance of citizens.

I will come back to it in a bit, but Damon Keith was central to a lot of what this blog did when we started.

One of Keith’s rulings, in 1970, led to the busing of students in the Pontiac schools to racially desegregate the district, sparking a backlash.

Keith recalled receiving death threats, and the year after his decision, 10 Pontiac school buses were firebombed by members of the local Ku Klux Klan.

Keith also ordered the U.S. government, under President Richard Nixon, to stop wiretapping defendants without judicial approval in a case involving the anti-war group the White Panthers and the bombing of a CIA building in Ann Arbor.

Damon Keith issued a lot of decisions, up until nearly his dying day, as evidenced by his participation in a Sixth Circuit decision finding tire chalking to be a 4th Amendment violation, issued just a mere six days ago. When he was 96 years old. Damon Keith was a stand up man and judge, that never flinched up to the end. That is a hero.

A few of you have been around long enough to remember when Marcy and I used to occasionally do Book Salons while we were still at FDL. The proudest one I ever did was shortly before we left, and was hosting the Salon and discussion for “Crusader For Justice”, the incredible book by Trevor Coleman and Peter Hammer, about the life, and love of law of Damon Keith. It is an incredible book about an incredible man. Please find it and read it, you will be a better person for having done so.

As Professor Henry Louis (Skip) Gates said in his blurb for Crusader For Justice:

No one will ever forget Judge Keith’s bold declaration in Detroit Free Press v. Ashcroft: “Democracies die behind closed doors”. Nor will they forget his contributions to achieving social justice and racial justice through his decisions involving discrimination, national security, and civil liberties. Judge Keith came from humble roots in Detroit. Having suffered racial injustice first hand, he had the bravery to take the phrase “equal justice under law” literally. Life experience matters, which is why diversity on the bench cannot be forsaken. Crusader For Justice, above all else, is the story of judicial courage – the story of a man unafraid to do what he knew was right.

Fittingly, Damon Jerome Keith was born on the Fourth of July, in 1922. But Crusader For Justice opens with Keith, a graduate of Howard University Law School, working as a janitor while studying for the bar exam. The humble willingness to work to achieve is a mirror for the subsequent journey through the childhood, family background, military service in WWII and educational progression of a social justice giant. But the true Damon Keith starts to emerge with his work with the Detroit NAACP, which he helped grow to stability and significance.

From a friendship with a young Senator from Massachusetts named John F. Kennedy through the pain of the ashes from the Detroit fires and riots of 1967 summer, Coleman and Hammer portray the growing conscience for justice and equality in Keith that leads to his appointment in late 1967 to the federal bench in the Eastern District of Michigan by Lyndon Johnson.

From there, the real heart of the judicial lion roars.

Okay, now, just for a moment, going to get back to why Damon Keith was so important to this blog. It was not just me and Marcy. Nope. It was Mary. And it is pretty fitting that, as we approach Derby Day, we get back to Mary. She wrote a three part explainer on the “Keith Case”. The formal caption was always “United States v. United States District Court”. That IS the “Keith Case”. Because of Judge Damon Keith. Here are the pertinent, and seminal, posts from Mary back in 2010.

There is a lot to digest here. I understand this. But, if you do, you will be better off for having done so.

Thank you. Thanks forever to Mary. And thank you Judge Damon Jerome Keith. This nation owes you a debt of gratitude.