The Orange Injector and the Troubling Tariffs

He did it again. I am so fed up with this nonsense. This:

For 10 months, China has been paying Tariffs to the USA of 25% on 50 Billion Dollars of High Tech, and 10% on 200 Billion Dollars of other goods. These payments are partially responsible for our great economic results. The 10% will go up to 25% on Friday. 325 Billions Dollars….

….of additional goods sent to us by China remain untaxed, but will be shortly, at a rate of 25%. The Tariffs paid to the USA have had little impact on product cost, mostly borne by China. The Trade Deal with China continues, but too slowly, as they attempt to renegotiate. No!

is yet another perfect opportunity for someone to game the market and do so in a big way.

Just look at this drop: 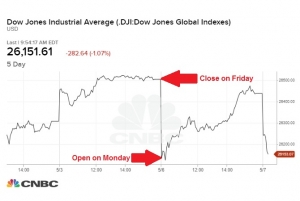 One needed only to short the market before it opened on Monday make huge amounts of money with no effort. And this time even the entire American market could have jumped on this; no more advance notice required apart from Trump’s Sunday and Monday tweets.

Believe me, the opportunity tempted me. I could see it coming. I only needed to short the NYSE:DIA using my pre-open trading access and I’d have raked in cash.

But it’s unethical; I can’t make money off people on the wrong side of Trump’s ridiculous foreign policy. It’s more like gambling on a steroid-doped horse and not true investment.

Nothing about Trump’s trade policy makes any sense (not that anything he does makes sense to a rational, ethical, sentient human being). What is the fundamental problem he wants to solve?

…Trump withdrew from the Trans-Pacific Partnership without ever proposing a replacement, and he appeared ready to do the same with the North American Free Trade Agreement (NAFTA). He imposed stiff levies on imported steel and aluminum, leading Canada, China, Mexico, and the European Union to slap the United States with retaliatory tariffs. At the same time, however, his administration ultimately agreed to a renegotiated NAFTA without major changes to the original agreement. It did the same for the U.S. free trade agreement with South Korea. So what signs could reveal his true intentions in 2019?

This entire paragraph operates on the assumption Trump acted in good faith on NAFTA.

This is the biggest mistake anyone can make about Trump, however. He has never done anything altruistic in his life. Every he’s done has been transactional. His lack of empathy for others combined with his selfish transactional nature precludes any good faith.

One need only look at his marriages to see his true self. He didn’t make any concerted effort to keep his vows, and when he’d obtained all he wanted from those relationships, he ditched his wives.

Even his Access Hollywood “grab them by the pussy” video revealed this: he believes that if one is a celebrity, one can do anything to a woman. In other words, the woman is receiving the attention of a celebrity in exchange for access to her body.

A transaction. Presence and access is consent as far as he’s concerned.

He is incapable of seeing anything he does as president as action on behalf of the country. In his mind the country already got what it wanted — his attention of a celebrity and his commitment to live in our house.

Rather like a second or third wife, we’re supposed to have gone into this relationship with our eyes open and have already received the best that we’ll get out of this deal. Meanwhile, he’s using our house for his personal aims.

And he’s using our relationship with major trading partners to shake them down for something to his benefit.

Re-read that paragraph from Foreign Policy again, only this time recognize the shakedown, the grift in between the lines. He received something from rattling NAFTA partners even if in the end it looks like nothing changed.

The New York Times published another expose on Trump’s finances based on transcripts of his IRS filings from 1985 to 1994. In the wake of the article there’s been a lot of chatter about how deeply in debt he was during the period these filings covered. But debt is just a number; it’s all in the accounting. The average American under the age of 40 is also deeply in debt if they’re buying a home, a car or two, and/or paying off the last of their tuition debt. Some of these debtors may tell you they made money and put it in the bank last year, though.

Trump was doing the same thing but at a much larger scale, only without the same consequences upon failure the average American would face:

Mr. Trump was able to lose all that money without facing the usual consequences — such as a steep drop in his standard of living — in part because most of it belonged to others, to the banks and bond investors who had supplied the cash to fuel his acquisitions. And as The Times’s earlier investigation showed, Mr. Trump secretly leaned on his father’s wealth to continue living like a winner and to stage a comeback.

Here’s the bit that jumped out at me from the NYT’s piece:

As losses from his core enterprises mounted, Mr. Trump took on a new public role, trading on his business-titan brand to present himself as a corporate raider. He would acquire shares in a company with borrowed money, suggest publicly that he was contemplating buying enough to become a majority owner, then quietly sell on the resulting rise in the stock price.

The tactic worked for a brief period — earning Mr. Trump millions of dollars in gains — until investors realized that he would not follow through. That much has been known for years. But the tax information obtained by The Times shows that he ultimately lost the bulk of the gains from his four-year trading spree.

Now Trump — or any of his partners/associates/financiers — no longer has to buy stock in a specific company to make money. He can use our house to act like a corporate raider. He can threaten to make or break a deal using the good faith and credit of the United States (instead of his own bad faith) and mess with the entire market.

In addition to Trump’s Sunday tweets. I suspect participants in the US and overseas markets in Asia and Russia could also have traded on Trump’s early Monday morning tweet:

This tweet is pure bullshit. There is nothing factual about it; it displays a gross ignorance about the trade deficit.

Putting aside the rational explanations about the trade deficit, the U.S. must keep in mind that China has been carefully negotiating its recovery after Mao Tse-tung’s Great Leap Forward and a realignment of mixed capitalist-communist system. It would be all too easy for the balance to shift reactively toward a more militarized communist system if it had an insufficient demand for its capitalist output.

But understanding this requires a degree of nuance beyond the grasp of the malignant narcissist-in-chief. He can only manage to ponder what’s in it for him.

Trump’s early Monday morning tweet would have been seen at these local times:

Ample time to jump in between the Sunday tweets and this Monday tweet if one was already holding index shares.

Those of use who didn’t trade on this information, though, went for a roller coaster ride on our hard-earned retirement savings and college funds as they plummeted Monday morning.

And because Trump is using our good faith and credit for his own aims, we can’t be absolutely certain he isn’t running some opaque con for a personal gain we know nothing about. We’re trapped in this vehicle for as long as he wants to run this scam.

And like some of the investors who loaned him money or contractors who worked for him in good faith in the past, we’ll end up holding the bag.

First, Steve Bannon needs to be de-platformed. He is deliberately sowing anarchy across the globe by promoting white nationalism. Populism, he calls it, but it’s racist appeals encouraging insurrection and sedition against liberal democracy.

When he encourages Trump’s stupidity toward China it’s not because it’s helpful to the common good. He may say that Trump’s tariff threats are a benefit to the working class but Bannon has no fucking clue how manufacturing actually works. It’s all an abstraction to him that capital might reshore from investment in China to investment here.

Reality looks more like Lordstown, Ohio where General Motors just shut down a plant. The economic changes that led to the closure have been years in the making. It takes years and hundreds of millions in capital investment to plan a new product line to respond to trends in consumers’ tastes including the manufacturing processes required. We’re also in the midst of a massive sea change in transportation, with competing countries shifting entirely to electric cars within the next two decades.

Which may be the point considering Trump and his minions and financial backers are no fans of organized labor in the U.S.

I’m sure Bannon will assure the workers of Lordstown jobs will be there for them at any moment once the impending trade war with China has settled.

[Note: While I was drafting this post Trump tweeted that GM was selling the Lordstown plant to electric truck manufacturer Workhorse. Now Trump will look like a winner for badgering GM’s CEO Mary Barra when this deal was likely in the offing for some time. Really stupid move on Barra’s part because now he’ll use this as leverage — her call gave him presence and access.]

Second, it may be valuable to note that key problem children who have supported anarchic white nationalism through Trumpism in the US and Brexit in the UK have something in common:

Imagine them realizing they could make a shit ton of money by injecting planned volatility into the market using Trump (or Brexit) as their injector.

I wouldn’t be surprised if the entire Trump administration was in on this scam. Here’s U.S. Trade Reprepresentative Robert Lighthizer about Trump’s latest tariffs on Chinese goods:

“This was Trump acting out on a rainy Sunday in Washington with nothing on the public schedule,” he added. “To paraphrase Lenin: there are decades where nothing happens and there are weeks when decades happen…and then there is a single week in the Trump Presidency. What a time to be alive.”