The government has released less redacted copies of Mike Flynn’s cooperation addendum (and two other documents that are not substantially less redacted except in revealing the names of people involved). Here’s the prior addendum for comparison sake.

The newly released document shows that in addition to Flynn’s cooperation against his former partner Bijan Kian, there were three parts to Flynn’s cooperation with the Mueller investigation (assuming a remaining redaction, likely to be the counterintelligence investigation, is not part of the Mueller investigation in chief). Aside from revealing that Flynn told Mueller who else was in the loop on his calls with Sergey Kislyak and the detail that others (who are not named) cleaned up their testimony after he flipped, as well as details about obstruction — some, but not all of which — show up in the report, the addendum reveals:

The defendant also provided useful information concerning discussions within the campaign about WikiLeaks’ release of emails. WikiLeaks is an important subject of the SCO’s investigation because a Russian intelligence service used WikiLeaks to release emails the intelligence service stole during the 2016 presidential campaign. On July 22, 2016, WikiLeaks released emails stolen from the Democratic National Committee. Beginning on October 7, 2016, WikiLeaks released emails stolen from John Podesta, the chairman of Hillary Clinton’s 2016 presidential campaign. The defendant relayed to the government statements made in 2016 by senior campaign officials about WikiLeaks to which only a select few people were privy. For example, the defendant recalled conversations with senior campaign officials after the release of the Podesta emails, during which the prospect of reaching out to WikiLeaks was discussed.

These references may be redacted in the Mueller Report.

As I’ve noted, one question from Mueller that Trump refused to answer was whether he discussed giving WikiLeaks a pardon. We know that immediately after the election WikiLeaks contacted Roger Stone and said they were more free to talk. 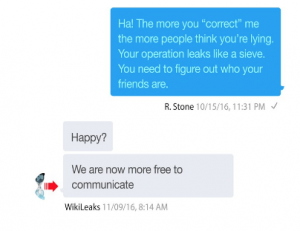 Julian Assange also reached out to Don Jr about making him Ambassador to Australia.

Hi Don. Hope you’re doing well! In relation to Mr. Assange: Obama/Clinton placed pressure on Sweden, UK and Australia (his home country) to illicitly go after Mr. Assange. It would be real easy and helpful for your dad to suggest that Australia appoint Assange ambassador to DC “That’s a really smart tough guy and the most famous australian you have! ” or something similar. They won’t do it, but it will send the right signals to Australia, UK + Sweden to start following the law and stop bending it to ingratiate themselves with the Clintons. 12/16/16 12:38PM

And starting in 2017, there was a year long effort by Trump flunkies, including Stone, to get Assange that pardon.

This revelation — that top people on the campaign considered reaching out to WikiLeaks — is not just new information, but information that likely is not included in the Mueller Report — unless it is included in the WikiLeaks declination and presumed referral — given the structure of the redacted sections (which end on October 7).

The timing of this, with Stone having received whatever testimony Flynn gave in this in discovery, and Assange awaiting extradition proceedings at Belmarsh but with little of this showing up in the Report itself, is acutely interesting.

Also interesting: Mueller did not include Flynn’s cooperation on the Peter Smith effort in his cooperation addendum (which Mueller notes is not comprehensive, although that shows up three times in the Mueller Report).

Update: Here’s the newly unsealed language on the obstruction stuff.

The defendant assisted the SCO’s investigation into potential efforts to interfere with or otherwise obstruct its investigation. See ODAG Order (authorizing the Special Counsel to investigation “any other matters within the scope of 28 C.F.R. § 600.4(a)”). The defendant informed the government of multiple instances, both before and after his guilty plea, where either he or his attorneys received communications from persons connected to the Administration or Congress that could have affected both his willingness to cooperate and the completeness of that cooperation. The defendant even provided a voicemail recording of one such communication. In some of those instances, the SCO was unaware of the outreach until being alerted to it by the defendant.

The big thing that was not in the Mueller Report is that someone connected to Congress was involved in the effort to dissuade Flynn to cooperate. While Nunes or one of his aides are a likely choice to be that person (and Rod Rosenstein had suggested along the way Nunes was violating secrecy orders on shared information on the investigation), don’t forget that Flynn has close ties to the Ledeens and was described as “colluding” with both in the Report; Barbara is an SJC staffer.