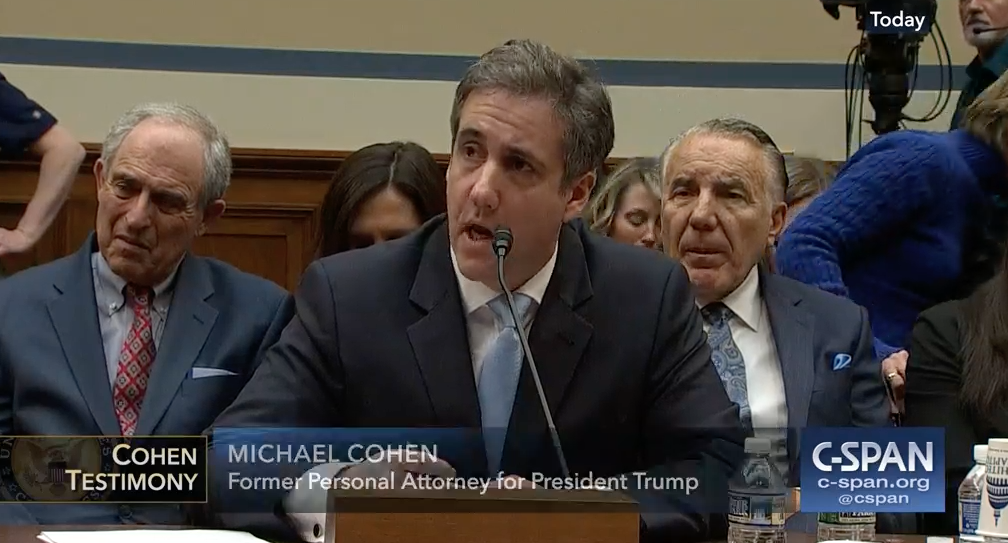 I noted a while back that after covering the dossier full time, Chuck Ross had finally figured out it might be Russian disinformation.

In his coverage of the then State Department Deputy Assistant Secretary of State for European and Eurasian Affairs notes of a briefing from Christopher Steele, he continues that beat, but proves himself to utterly misunderstand the significance of disinformation — and do some of his most dishonest reporting to boot.

The notes from Kathleen Kavalec, which Citizens United liberated and which have been feeding the frothy right and the credulous left for a week, show that she recognized the raw intelligence she was being briefed on had problems, most notably in the claim that payments to a network of Russians in the US were paid out of the Russian Consulate in Miami — a consulate that Kavalec notes in her own notes does not exist (though which is curiously in the same place as Roger Stone).

That said, there are parts of it that actually accord with what we know: that Dmitry Peskov was in the loop, that the election year operation was not run by FSB, and that Russian thought they could keep this operation anonymous but failed. Even the claim that Carter Page was involved is more credible than the actual dossier claims about him, given that when he was in Russia, according to the Mueller Report, Peskov considered meeting with Page but then said,

“I have read about [Page]. Specialists say that he is far from being the main one. So I better not initiate a meeting in the Kremlin.”

The most ridiculous thing in Kavalec’s notes are how the Trump Tower-Alfa Bank-Spectrum Health hoax had gotten into the Christoper Steele reporting chain, which I correctly laid out in March 2017. As Steele (or Jonathan Winer, who may have briefed Kavalec in a game of telephone) understood it, the DNS look ups included Tor and was used by Paul Manafort to communicate with Alfa. That makes the entire story even stupider than it always has been, both on technical grounds (which in turn suggests Steele doesn’t understand computers, which is apparent from every single one of his cybersecurity reports), on logistics (why would Paul Manafort communicate from his Trump Tower condo via a server in Pennsylvania), and Manafort’s own habits (we know him to use foldering and WhatsApp, not Tor).

In other words, Kavalec’s notes, which show either the even rawer  intelligence on which Steele based his raw intelligence reports or a game of telephone that inserted errors at each re-telling, show them to be at once shittier and in a few areas also potentially more accurate than the dossier itself. 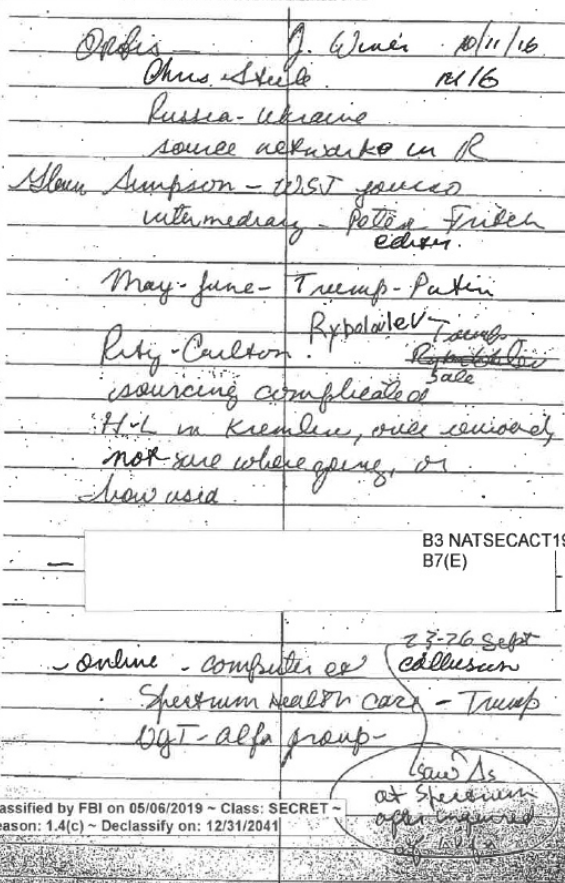 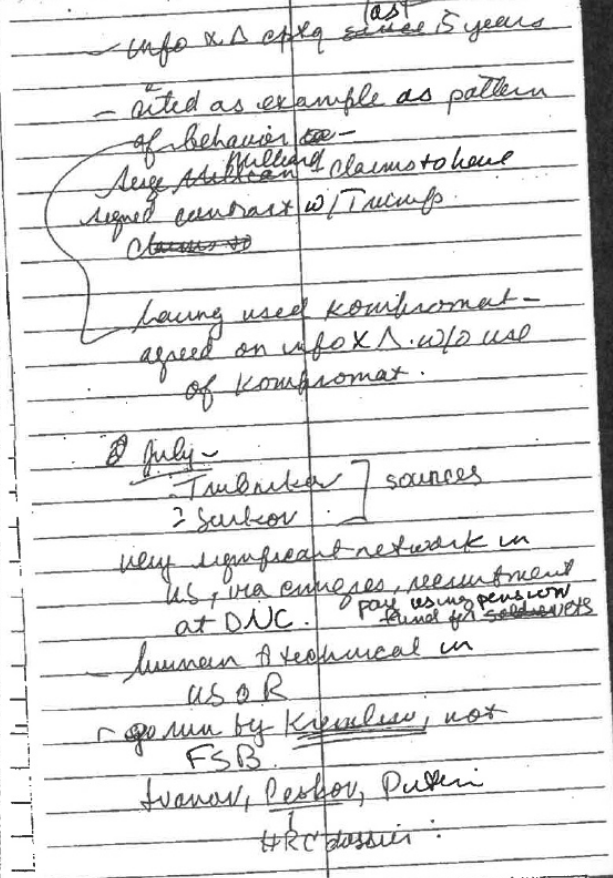 Which get translated into this typed summary by Kavalaec: 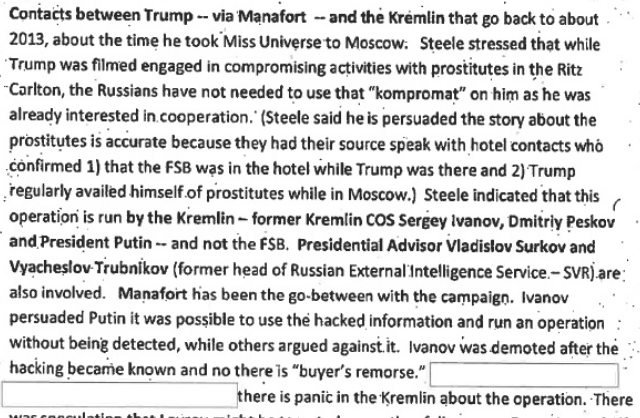 And he invents from that that Vyacheslav Trubnikov and Vladislav Surkov are sources, for Steele, for the pee tape allegation.

The references to Trubnikov and Surkov, which have not previously been reported, are not definitive proof that either were sources for Steele’s dossier or that they were involved in an effort to collect blackmail material on Trump.

Trubnikov and Surkov are not identified by name in Steele’s dossier, which the FBI used as part of its investigation into possible collusion between the Trump campaign and Russia. But the information that the former British spy attributed to the two Russians involves the dossier’s most salacious allegation: that the Russian government had sexually compromising material on Trump.

Kavalec’s notes said Steele claimed Trump was “filmed engaged in compromising activities” with Russian prostitutes in 2013, but that “the Russians have not needed to use the ‘kompromat’ on [Trump] as he was already in cooperation.”

Steele, who operates a private intelligence firm in London, told Kavalec that Putin and some of his top advisers were running the Trump operation.

Kavalec’s handwritten notes also contain a reference to Trubnikov and Surkov as “sources,” but with no additional explanation.

Trubnikov served as head of Russia’s for

eign intelligence service, SVR, from 1996 to 2000. He went on to serve as first deputy for foreign affairs and ambassador to India.

The unverified allegations of sexual blackmail material on Trump are included in the June 20, 2016, memo from Steele’s dossier. Steele had been hired that same month by Fusion GPS, an opposition research firm the DNC and the Clinton campaign paid to investigate Trump.

Citing “a former top level Russian intelligence officer still active inside the Kremlin,” Steele claimed Russian authorities had gathered a substantial amount of “embarrassing material” on Trump and would “be able to blackmail him if they so wished.”

It is difficult to know how to interpret Steele’s claims about Trubnikov and Surkov, given the numerous problems that have emerged with the former British spy’s reporting.

But at least as Kavalec renders the reference to Trubnikov and Surkov in her typed summary of her own notes — which is where Ross gets the claim they’re sources for the pee tape — they are not sources for Steele but instead participants in the election year operation.

Steele stressed that while Trump was filmed in compromising activities with prostitutes in the Ritz Carlton, the Russians have not needed to use that “kompromat” on him as h was already interested in cooperation. (Steele said he is persuaded the story about the prostitutes is accurate because they had their source speak with hotel contacts who confirmed 1) that the FBS was in the hotel while Trump was there and 2) Trump regularly availed himself of prostitutes while in Moscow.) Steele indicated that this operation is run by the Kremlin — former Kremlin COS Sergey Ivanov, Dmitry Peskov and President Putin — and not the FSB. Presidential Advisor Vladislov [sic] Surkov and Vyacheslov [sic] Trubnikov (former head of Russian External Intelligence Service — SVR) are also involved.

Indeed, per Kavalec’s notes, Steele had just one source for the pee tape allegation, not two.

So Ross is, for starters, misreading what Kavalec’s notes say (which is not to say her own rendering of the notes — in either her handwritten notes or typed up summary — is accurate; this is ultimately a giant game of telephone).

But then, in a long piece that includes two paragraphs on how the Mueller Report debunked “Steele’s core claim of a ‘well-developed conspiracy’ between the Trump campaign and the Kremlin,” Ross doesn’t mention what the Report says about the pee tape.

The special counsel’s report all but debunked Steele’s core claim of a “well-developed conspiracy” between the Trump campaign and Kremlin. The report also said Michael Cohen did not visit Prague, which is where Steele claimed the former Trump lawyer met with Kremlin insiders to pay off computer hackers. (RELATED: Mueller Report Undercuts Several Steele Dossier Claims)

Public evidence has not backed up other allegations, including about “kompromat” on Trump. The president has vehemently denied the sex tape claim, and individuals who were with Trump during his Moscow trip have cast doubt on the allegation, saying Trump had virtually no time to take part in the steamy activities described by Steele.

The pee tape is the dossier claim that the Mueller Report most directly corroborates (though, given that Mueller never figured out what Manafort was doing sharing polling data he knew would be shared with Oleg Deripaska, in part because of Trump’s obstruction, we can’t discount the possibility he was coordinating more directly).

In the guise of explaining why Trump may have reacted badly when Jim Comey briefed him on the dossier, Mueller explained how Giorgi Rtskhiladze called Michael Cohen just before the election to assure him that he had “stopped flow of tapes from Russia,” which Rtskhiladze took to mean kompromat from the same 2013 trip Steele said the kompromat came from.

Comey’s briefing included the Steele reporting’s unverified allegation that the Russians had compromising tapes of the President involving conduct when he was a private citizen during a 2013 trip to Moscow for the Miss Universe Pageant. During the 2016 presidential campaign, a similar claim may have reached candidate Trump. On October 30, 20 I 6, Michael Cohen received a text from Russian businessman Giorgi Rtskhiladze that said, “Stopped flow of tapes from Russia but not sure if there’s anything else. Just so you know …. ” 10/30/16 Text Message, Rtskhiladze to Cohen. Rtskhiladze said “tapes” referred to compromising tapes of Trump rumored to be held by persons associated with the Russian real estate conglomerate Crocus Group, which had helped host the 2013 Miss Universe Pageant in Russia. Rtskhiladze 4/4/18 302, at 12. Cohen said he spoke to Trump about the issue after receiving the texts from Rtskhiladze. Cohen 9/12/18 302, at 13. Rtskhiladze said he was told the tapes were fake, but he did not communicate that to Cohen. Rtskhiladze 5/10/18 302, at 7.

Rtskhiladze has complained about how Mueller’s team portrayed this. But not only does his complaint contradict itself on the key issue of whether the tapes were real or not, it actually provides more reason to question whether the tapes exist or not (as Rtskhiladze worked so hard to deny he had seen them).

I’m not saying the tapes exist — but that’s the point about Russian disinformation, they don’t have to exist. There are four possibilities at this point:

That possibility would totally fuck with Chuck’s story — which also entails making much of the mention of the fact that Stefan Halper, someone the US government paid to collect intelligence on people including Russians, invited Trubnikov to an event where Halper might collect information from him.

Virtually all the denialists argue that we should not talk about how the pee tape appears in the Mueller Report, even though both Cohen and Rtskhiladze — seemingly independently — seem to have the same understanding of what those text messages relate to, even though both have said that they don’t believe the tapes to actually exist.

Chuck wants this to feed his partisan narrative that the Democrats — in compiling the same kind of oppo research that Steve Bannon did with Clinton Cash — did something bad (they did something incompetent, which is different) and the Russians capitalized on that to make Trump look bad (with information that, in significant parts, alleges things that really happened, but with other people involved). But real or fake, the pee tape referenced by Rtskhiladze undermines that narrative. It means that Russians were happy to sow disinformation targeting everyone.

Unsurprisingly, then, Chuck remains silent about it.

The Trump Campaign Discussed Reaching Out to WikiLeaks after WikiLeaks Helped... In a Bid to Jettison Flynn, Trump Suggests Hope Hicks and Steve Bannon Lied...