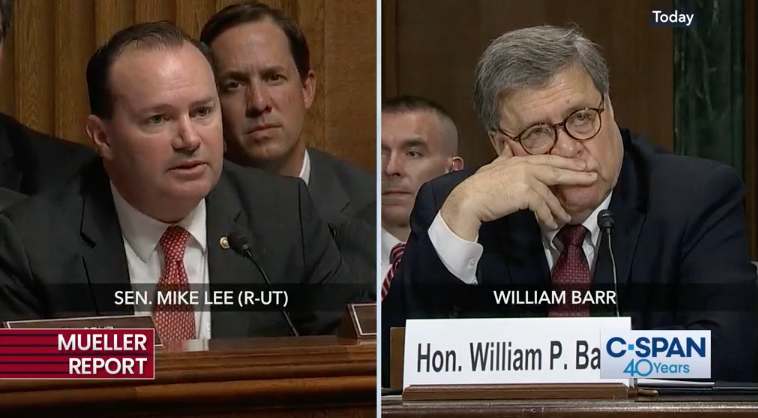 Bill Barr hit the right wing news circuit today to make vague claims designed to feed the hoax about inappropriate spying on the Trump campaign. With both the WSJ and Fox, he obfuscated about what led him to ask John Durham to conduct what amounts to at least the third review of the origins of the Russia investigation.

“Government power was used to spy on American citizens,” Mr. Barr told The Wall Street Journal, in his first interview since taking office in February. “I can’t imagine any world where we wouldn’t take a look and make sure that was done properly.”

In his Wednesday interview, he declined to elaborate or offer any details on what prompted his concerns about the genesis of the Russia probe.

Mr. Barr wouldn’t specify what pre-election activities he found troubling, nor would he say what information he has reviewed thus far or what it has shown. He said he was surprised that officials have been so far unable to answer many of his questions.

“I have more questions now than when I came in,” he said, but declined to detail them.

Given his inability to point to a reason to start this (aside from Trump’s direct orders), it’s worth looking back at something Barr said in his May 1 Senate Judiciary Committee hearing. Mike Lee attempted to get the Attorney General to substantiate his claim — made on April 10 — that the Trump campaign had been inappropriately spied on. In response, Barr explained his spying comment by suggesting that if the “only intelligence collection that occurred” were the FISA warrant on Carter Page and the use of Stefan Halper to question George Papadopoulos, it would amount to an “anemic” effort given the counterintelligence threat posed.

One of the things I want to look — there are people — many people seem to assume that the only intelligence collection that occurred was a single confidential informant and a FISA warrant. I’d like to find out whether that is, in fact, true. It strikes me as a fairly anemic effort if that was the counterintelligence effort designed to stop the threat as it’s being represented.

Over the course of this exchange, Barr admits he doesn’t know or remember what the Mueller Report says about Carter Page, and Lee displays that he’s unfamiliar with several points about Page in the Mueller Report:

Even with all the details about Page Lee appears to be unfamiliar with, there are more that he cannot know, because they’re protected as grand jury materials.

Which is to say neither of these men knew enough about the investigation on May 1 to be able to explain why Barr needed to do an investigation except that Barr thought not enough spying occurred so he was sure there must be more. Had Barr read the IG Report laying out some of these issues, he would know that the investigation was anemic, in part because on August 15, Peter Strzok lost an argument about how aggressively they should pursue the investigation.

In a text message exchange on August 15, 2016, Strzok told Page, “I want to believe the path you threw out for consideration in Andy’s office—that there’s no way he gets elected—but I’m afraid we can’t take that risk. It’s like an insurance policy in the unlikely event you die before you’re 40….” The “Andy” referred to in the text message appears to be FBI Deputy Director Andrew McCabe. McCabe was not a party to this text message, and we did not find evidence that he received it.

In an interview with the OIG, McCabe was shown the text message and he told us that he did not know what Strzok was referring to in the message and recalled no such conversation. Page likewise told us she did not know what that text message meant, but that the team had discussions about whether the FBI would have the authority to continue the Russia investigation if Trump was elected. Page testified that she did not find a reference in her notes to a meeting in McCabe’s office at that time.

Strzok provided a lengthy explanation for this text message. In substance, Strzok told us that he did not remember the specific conversation, but that it likely was part of a discussion about how to handle a variety of allegations of “collusion between members of the Trump campaign and the government of Russia.” As part of this discussion, the team debated how aggressive to be and whether to use overt investigative methods. Given that Clinton was the “prohibitive favorite” to win,

Strzok said that they discussed whether it made sense to compromise sensitive sources and methods to “bring things to some sort of precipitative conclusion and understanding.” Strzok said the reference in his text message to an “insurance policy” reflected his conclusion that the FBI should investigate the allegations thoroughly right away, as if Trump were going to win. Strzok stated that Clinton’s position in the polls did not ultimately impact the investigative decisions that were made in the Russia matter.

So the investigation was anemic, and it was anemic because the guy Lee blames for unfairly targeting Trump wasn’t permitted to investigate as aggressively as he believed it should be investigated.

In the exchange, Barr also says he doesn’t want to get into the “FISA issue,” on account of the IG investigation into it — which would seem to leave just the Halper-Papadopoulos exchange to investigate.

DOJ’s IG has probably given the initial results of its investigation into FISA to FBI. I say that because of Chris Wray’s objection to the use of the word “spying” to describe predicated surveillance, Trump’s attack on Wray because of it, and the unsealing of the names of additional people at the FBI involved in interviewing Mike Flynn — Mike Steinbach, Bill Priestap, James Baker — as well as Principal Associate Deputy Attorney General Matt Axelrod in two of the documents tied to his sentencing released last night. That would suggest there’s nothing substantive there (which is not surprising, given how much more damning the information about Page is than we previously knew).

Which would mean the biggest reason Barr is starting this witch hunt is that the investigation was so anemic to begin with.

In a Bid to Jettison Flynn, Trump Suggests Hope Hicks and Steve Bannon Lied... Mike Flynn’s “Cooperation” Did Not Extend to Remembering Bob...