I’ve been thinking about the Green New Deal and how policy will meet the turf when it comes to agriculture.

Fortunately I have a farmer in the family I could ask about one issue in particular — that of tillage.

Average Americans munching away on their toasted bagel at breakfast, their grilled cheese sandwich at lunch, and their crispy nachos at dinner don’t think about the amount of soil preparation — tillage — which goes into the crops they consume over the course of three square meals. They not only don’t think about all the fuel and oil soil prep requires, they don’t think about the additional passes over a field for seeding, weed control, and harvest to follow, all of which require more fuel and oil, and chemicals derived from or with oil in the case of herbicides, pesticides, and fertilizer.

There’s been an increasing amount of interest in low-till and no-till farming as part of conservation farming because of the amount of oil required along with concerns that tilling may do more harm than not when turned-up top soil is washed or blown away.

An equally important benefit is carbon sequestration. In the simplest terms, plants are carbon capture mechanisms. They take in carbon dioxide (CO2), water (H2O), and nutrients to build tissues. The produce we harvest is carbohydrate — carbon, hydrogen, and water stitched together in a compound we consume. What’s left in the field after our harvest, all that plant waste matter, is mostly carbon compounds lying on the surface of the soil.

When left undisturbed, plant waste matter left to decay releases nutrients, provides mulch to reduce moisture evaporation, stabilizes top soil against erosion by wind and water, while acting as a carbon sink. The more carbon we can sequester in organic material, the less carbon there is in the air in the form of CO2. No-till farming allows the carbon sink to accumulate rather than disturbing it with cultivation which prevents its accumulation.

Not to mention the soil develops a more complex microbiome freeing additional nutrients from the earth and the compost mixture above, potentially increasing nutrient value in crops.

No-till sounds like the method we should already be using as widely as possible, yes? Sadly, we aren’t.

One issue affecting farmers attitudes is weed control. They end up using more herbicides on no-till which may offset any environmental gains made by reducing oil consumption. It’s not clear from the studies I’ve read whether the problem is weeds reducing crop yields — in the case of wheat, no-till results in a 5% reduction and in corn, 7.6% reduction — or if it is in part a long-held bias against weeds and for action to eliminate them.

The bias has been documented in research and appears to be based in education. Farmers with a higher level of education are less reluctant to adopt no-till, but these same farmers may be more efficient and not experience the same level of output reductions as less educated farmers.

There remain concerns about crop yields which could be mitigated with use of methods like allelopathic cover crops — like planting rye to winter over before planting another crop over it in the spring. Rye inhibits the growth of broadleaf weeds. Unfortunately, rye also interferes with corn productivity depending on when the corn is planted. A season like 2019 makes it very difficult to manage when planting will happen due to the amount of moisture from snow melt and rain.

There aren’t many identified alternative allelopathic crops either, for use as cover or not. It’s an area ripe for research but we all know how the Trump administration is toward any science which may affect corporate donors like Big Ag and Big Pharma (the latter has strong overlap with the former).

All this brings me to that conversation I had with the farmer in the family.

They grow one fairly simple crop: hay. That’s it. That’s their specialty, that’s all they’ve done on their small farm for decades. The entire family pitches in some way and they earn enough to pay the property taxes on the small farm and the family home along with covering home heating, electricity, and maintenance. Not big money but subsistence level.

I asked about no-till and if they could use it on their farm. They explained the type of soil they had — gave me a name for it which I won’t share because it can too easily be used to identify a part of the country. This type of soil didn’t do well with no-till, they explained, while looking at me skeptically because I’m a suburbanite.

This set me off researching soil types. I didn’t know there were more than 20 in my own county and they were all different from the soil types in the subject farmer’s county

Look for a soil survey of your own home county; it’s highly educational and may even explain somethings you might never have noticed or attributed to something else. Like the layout of towns and cities and their relative organization compared to soil types; I had NO idea that the location of my town wasn’t dictated solely by a couple rivers’ paths but by the adjacent soil. Some areas that remain heavily wooded also happen to be near soil which is difficult to farm and/or in flood plains; other areas which have great soil remain wide open, undeveloped, and under cultivation. Still other areas which have crappy soil according to old maps were built up with businesses and residential developments.

I don’t think I want to ask any more questions of them for fear of stirring up a rat’s nest in the family. But I do want to stir the pot a bit here, because this has proven to be a far more complex topic than the average American realizes yet depends on every day and agriculture policy will be critical to the Green New Deal.

Just looking into soil preparation to grow crops opened up a huge can of worms, touching on so many different issues.

Like culture — is some of the bias against no-till based in cultural identity which may prove resistant to change whether about farming techniques, agricultural policy, or the Green New Deal?

Like economics — can we provide enough incentives to pay farmers an offset for their reduced yields until they become practiced at no-till and other conservation farming techniques? Can we do it with carbon offsets?

Like politics — can we push back against Big Ag and Big Pharma so that farmers can migrate toward more aggressive conservation farming without corporate-captured policy working against them?

The worst part of this dive — which is by no means comprehensive and probably shot through with errors of my own understanding — is that the clock is ticking. We don’t have much time, like a handful of years. We don’t have enough research and we’re fighting the highly toxic combination of ignorance, bias, corporatism, and corruption to overcome this insufficiency.

The worst case could already be upon us if we look at the mid-section of this country. 51% percent of corn is late for planting, and with the rain expected from Texas through Iowa this week, the percentage may not shift much. This past week only saw 5% of the corn crop planted, while only 19% of the country’s soybeans have been sown.

Imagine a couple years of this, combined with the additional pressure Trump has placed on farmers by fomenting a trade war with China. What crops they’ve grown, especially soybeans, earmarked for export have gone unpurchased. In some cases they spoiled in this spring’s floods. Farmers who might have been on the bubble before and during the tariffs might not be able to swing the cost of late planting if it cuts into yields. How do farmers budget when the season is so out of whack that forecasting pricing let alone yields seems impossible? 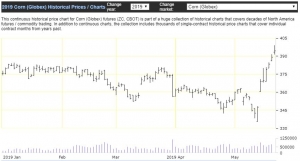 Not to mention the cost of capital equipment like tractors. Farmers must already have slowed or halted their orders because tractor manufacturer John Deere is cutting production by 20%.

At what point do we begin to worry about global food shortages due to crop failures here in the U.S.? The U.S. is the largest producer of maize, which may take a particular beating this year due to the wet planting season.

What really gets my goat after reading about all the challenges farmers face trying to make a living using traditional or conservation farming techniques in the face of now-unavoidable climate emergency and unnecessary political hassles: that Donald Trump’s Bedminster golf course draws $80,000 in tax credits for farmers because his course keeps a handful of goats and a small hay patch within the course’s property. His “farm” may even receive more credits post-tariffs since it’s small scale and I’m not certain anyone is looking to see if Bedminster qualifies or not.

Enjoy those nachos while you can, folks.

This is an open thread. Bring all your non-Trump-Russia issues to this thread.