The Charges Against Julian Assange 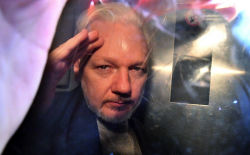 As expected, EDVA rolled out a bunch more charges, under the Espionage Act, against Julian Assange. I’m going to do a follow-up post on how stupid the way they’ve done this is, but first wanted to lay out the charges.

The indictment charges Assange with 17 new counts (in addition to the single CFAA charge they’ve already charged him with, which is now Count 18).

Then there are a set of throw-everything-at-the-wall charges that charges Manning giving three sets of files — the Detainee Assessment Briefs, the State Department Cables, and the Iraq Rules of Engagement — to Assange in four different ways.

The attempt, Count 5, is related to the files Chelsea Manning would have gotten had the password crack been successful.

Then there are the two charges associated with what Manning would have gotten had Assange succeeded in cracking that password — the CFAA charge and the attempt to obtain charge.