Amy Berman Jackson just released texts that she used to consider sanctioning Manafort lawyer Kevin Downing for violating her gag order by speaking with Sean Hannity. They include almost a year of remarkably friendly texts between Hannity and Manafort.

There’s a whole lot to unpack in these texts, starting with how certain Manafort was that Mueller would prosecute Jared Kushner. he first raises it shortly after he got raided in summer 2017, just before he complains that “Russia is history now that they have the spec counsel.”

Then Hannity raised it in January 2018, not long before a story revealed that Trump was telling people Manafort could incriminate him. 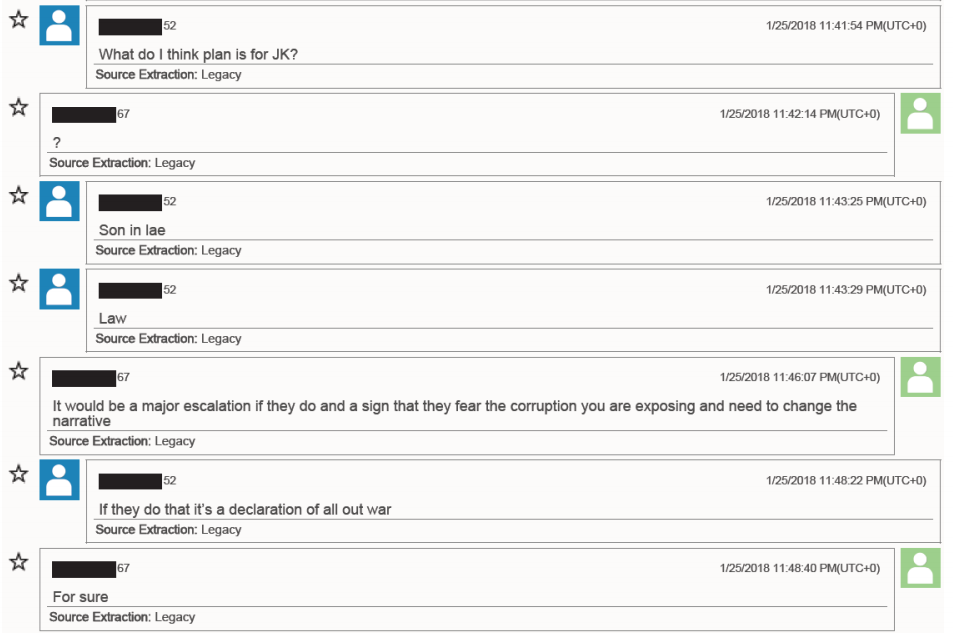 In March, Hannity asked Manafort why he didn’t get a plea deal like Gates got. Manafort said prosecutors would expect him to give up Kushner, though claimed Kushner hadn’t done anything wrong.

After the search on Michael Cohen, Hannity said it was war. Manafort predicted Mueller would get Jared.

All this happened months before Manafort accepted a plea deal. As part of that, he agreed to cooperate in another DOJ investigation about an effort in August 2016 to save the Trump campaign. As soon as he got the plea deal, however, he changed his story to match the one being told by the target of that other investigation.

Effectively, Manafort was asked some questions in a proffer session before his plea on September 13, in response to which he offered information that implicated someone with a 7-character name. [These dates are in the government’s January 15 filing at 23.] Then, in a debriefing on October 5, he changed his story to make it less incriminating — and to match the story the subject of the investigation was telling to the FBI at the time (last fall). When pressed by his lawyers, Manafort mostly changed his story back to what it had been. But the head fake made Manafort useless as a witness against this person.

Judge Amy Berman Jackson summed up this change this way:

This investigation pertains to events that happened “prior to [Manafort] leaving the campaign (on August 19).” [January 15 filing at 26]

As Andrew Weissman described in the breach hearing, Manafort’s version of the story first came when prosecutors, “were asking questions about an e-mail that Mr. [5 character name] had written about a potential way of saving the candidate. That’s sort of paraphrasing it. And this was a way of explaining, or explaining away that e-mail.” In the Janaury 15 filing, this conversation arises to explain “a series of text messages.” [See 25]

Weissmann describes that the revised story Manafort told was, “quite dramatically different. This is not I forgot something or I need to augment some details of a basic core set of facts.” Manafort’s original story involved Mr. [7 character redaction] providing information about a [redacted] who was doing something. Manafort appears to have made a representation about what Mr. [7 character name] believed about that (likely important to proving intent).

It appears that Manafort had something very specific in mind in which he could implicate Jared.

Update: On second read, it’s clear why ABJ released these: it has taken that much time to get the two parties to weigh in. First, the government weighed sometime before May 17. It took until sometime this month for Manafort’s team to respond to ABJ’s order to decide whether it can be released. Which is why it is only now being released. Note that there’s a second set of communications that she has withheld, as it is grand jury material related to an ongoing matter.

Manafort Told Hannity Gates Was in for the Long Haul after Discussing Pardons... The Ongoing Proceeding into Paul Manafort’s Kevin Downing-Related Tex...