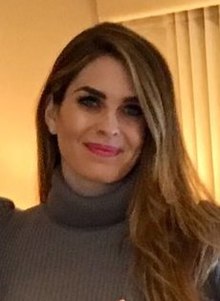 Last week, Hope Hicks sat for a mostly tactical interview with the House Judiciary Committee. Democrats used her testimony to establish a record of just how ridiculous the White House claims to absolutely immunity are by getting her on the record refusing to answer both utterly pertinent questions and innocuous ones, like where her desk in the White House was.

While she dutifully refused — on the orders of White House Counsel — to answer questions about her time in the White House, she actually slipped in two answers: revealing that after Trump had his own people in charge of the Intelligence Community, he “he had greater confidence in their assessments” that Russia hacked the DNC and that she learned of the Letter of Intent to build a Trump Tower Moscow in fall 2017. Those are questions White House lawyers would have otherwise prohibited; I’m not sure how it’ll change the use of this hearing as evidence in the lawsuit to get her to actually testify.

Her answers with regards to the period prior to inauguration reveal what she would (and will) be like if she ever actually testifies. In those exchanges, Hicks comes off like a very well lawyered witness who was willing to shade as aggressively as possible to protect Trump.  That was most obvious in her answers about WikiLeaks, first in response to questions from Sheila Jackson Lee. In that exchange, the press secretary of a presidential campaign claimed not to have a strategy surrounding messaging the campaign engaged in on a daily basis.

Ms. Jackson Lee. I’m going to have one or two questions and — I’ve done it again — one or two questions in a number of different areas. Let me first start with the report. According to the report, by late summer of 2016 the Trump campaign was planning a press strategy, a communications campaign and messaging, based on the possible release of Clinton emails by WikiLeaks. Who was involved in that strategy?

Ms. Jackson Lee. I thought you were intimately involved in the campaign.

Ms. Hicks. I was. It’s not something I was aware of.

Ms. Jackson Lee. What about the communications campaign, who was involved there? Do you not recall or do you not know?

Ms. Hicks. To my recollection, it’s not something I was aware of.

Side note: She would later admit that there was a group of people during the Transition responding to allegations of Russian interference and a somewhat different group of people responding to allegations they tried to make contact with Russia. But that covered the Transition and, with the exception of Jason Miller (who deleted his Twitter account the other day after attacking Jerry Nadler), didn’t include communications people.

Back to her exchange with Jackson Lee, who persisted in finding out how the campaign responded to WikiLeaks’ releases. That’s when Hicks described the campaign’s daily focus on optimizing WikiLeaks releases as using publicly available information, even while insisting it was not part of a strategy.

Ms. Jackson Lee. So specifically it goes to the release of the various WikiLeaks information. Who was engaged in that?

Ms. Hicks. So, I mean, I assume you’re talking about late July?

Ms. Hicks. So there were several people involved. It was — I think a “strategy” is a wildly generous term to describe the use of that information, but —

Ms. Jackson Lee. But you were engaged in the campaign. What names, what specific persons were involved in that strategy of the impact of Russia and the issuance of the WikiLeaks effort late summer?

Ms. Jackson Lee. Were you involved? Were you part of the strategy? You have a communications emphasis.

Ms. Jackson Lee. Well, what names were engaged in the strategy that you remember, messaging based on the possible release of Clinton emails by WikiLeaks, which is what I said?

Ms. Hicks. Sorry. I’d like to confer with my counsel. Thanks.

Ms. Jackson Lee. Yes. I’m going to read from my earlier comment. According to the report, by late summer of 2016 the Trump campaign was planning a press strategy, a communications campaign, and messaging based on the possible release of Clinton emails by WikiLeaks, volume 1, 54. Were you involved in deciding how the campaign would respond to press questions about WikiLeaks?

Ms. Hicks. I assume that I was. I have no recollection of the specifics that you’re raising here.

Ms. Jackson Lee. With that in mind, would you agree that the campaign benefited from the hacked information on Hillary Clinton?

Ms. Jackson Lee. Were you — would you agree that the campaign benefited from the hacked information on Hillary Clinton?

Ms. Hicks. I don’t know what the direct impact was of the utilization of that information.

Ms. Jackson Lee. Well, let me follow up with, did this information help you attack the opponent of Mr. Trump?

Ms. Hicks. I take issue with the phrase “attack.” I think it allowed the campaign to discuss things that would not otherwise be known but that were true.

Hicks never did answer Jackson Lee’s question about how the campaign optimized the releases, but Norm Eisen (who was hired for precisely this purpose) came back to it. Ultimately Hicks described integrating WikiLeaks releases into Trump speeches.

Q Okay. Ms. Hicks, you were asked by Ms. Jackson Lee about a statement in the Mueller report that by late summer of 2016 the Trump campaign was planning a press strategy, a communications campaign, and messaging based on the possible release of Clinton emails by WikiLeaks, and you answered to the effect that it was wildly inaccurate to call it a strategy. Do you remember that answer?

A I believe I said that I wasn’t aware of any kind of coordinated strategy like the one described in the report and quoted by Ms. Jackson Lee. Regardless, the efforts that were under way, to take publicly available information and use that to show a differentiation between Mr. Trump as a candidate and Mrs. Clinton as a candidate, I would say that it would be wildly generous to describe that as a coordinated strategy.

Q How would you describe it? A I would describe it just as I did, which is taking publicly available information to draw a contrast between the candidates.

Q What do you remember about any specific occasions when that was discussed?

A The things I remember would be just the days that — that news was made, right? That there was a new headline based on new information that was available, and how to either incorporate that into a speech or make sure that our surrogates were aware of that information and to utilize it as talking points in any media availabilities, interviews, and what other opportunities there might be to, again, emphasize the contrast between candidates.

Q Did you ever discuss that with Mr. Trump during the campaign?

A Again, I don’t recall a — I don’t recall discussions about a coordinated strategy. But more specifically, to your last point about when there were moments that allowed for us to capitalize on new information being distributed, certainly I’m sure I had discussions with him.

She would go on to admit that the communications team discussed the WikiLeaks releases on a daily basis. But she maintained that — in spite of the evidence that Trump, with whom she spent extensive amounts of time, knew of the emails ahead of time — she did not

EISEN When is the first that you remember learning that WikiLeaks might have documents relevant to the Clinton campaign? A Whenever it became publicly available. I think my first recollection is just prior to the DNC Convention. Q And what was your reaction when you learned that?

A I don’t recall. I think before I described a general feeling surrounding this topic of not happiness, but a little bit of relief maybe that other campaigns had obstacles to face as well.

Q And I know we’ve touched on this but I just want to make sure we get it into the record. What’s your first recollection of discussing this issue with Mr. Trump?

Eisen did get her to admit that Eric Trump sent her the oppo research file on his father, though she claimed to be uncertain about when that happened. Once again, when asked a substantive question about something embarrassing to Trump, she conferred with her lawyer, Robert Trout, before answering.

Q And did Eric Trump ever discuss anything relating to WikiLeaks or other releases of hacked information with you? A May I confer with my counsel, please.

[Discussion off the record.]

Ms. Hicks. Can you repeat the question, please?

Mr. Eisen. Can I have the court reporter read back the question, please?

Reporter. Did Eric Trump ever discuss anything relating to WikiLeaks or other releases of hacked information with you?

Ms. Hicks. I believe I received an email from Eric or some written communication regarding an opposition research file that was, I guess, leaked on the internet. I believe it was publicly available when he sent it to me. It was about Donald Trump.

BY MR. EISEN: Q And do you know if it was publicly available when he sent it to you?

A I don’t recall. That’s my recollection.

Q What’s the basis for your belief that it was publicly available?

A I believe there was a link that was included, and I was able to click on that and access the information.

Q How did he transmit that to you?

A I don’t remember if it was an email or a text message.

Q Was there also a document attached to that transmission?

A I don’t remember.

Q Do you remember the date?

In any case, while most of the coverage has focused on the White House efforts to prevent Hicks from answering questions, her responses on WikiLeaks make it clear she herself was unwilling to answer basic questions as well.

Which is why this exchange about the Joint Defense Agreement as part of which her attorney got paid half a million dollars by the RNC is telling.

Ms. Scanlon. Okay. Do you now or have you had any joint defense agreements with anyone in connection with your activities either during the campaign or since then?

Ms. Hicks. Be privileged with my counsel.

Mr. Trout. I’m not going to answer that.

Ms. Scanlon. Okay. On what basis?

Ms. Scanlon. What kind of privilege.

Ms. Scanlon. The fact of having a joint defense agreement is not —

Mr. Trout. I will — it will be privileged

Hicks is absolutely entitled to keep details of her legal representation secret. But this — like some of the questions she refused to answer about her time in the White House — is public information. As such, her non-responsiveness about the degree to which she has compared answers with Trump is as obvious an obstruction tactic as the White House absolute immunity effort.

The Ongoing Proceeding into Paul Manafort’s Kevin Downing-Related Tex... Hope Hicks Had More Awareness of the Flynn-Kislyak Aftermath Than the Mueller...