Yesterday, the government released redacted dockets showing the work of Mueller’s grand jury (warrants, d-orders, PRTTs; h/t to CNN’s Katelyn Polantz, who liberated these). They’re not all that useful, though I’m cross referencing them with the known warrants or events. That said, one detail in the list explains something that happened last year. In March 2018, Manafort asked for unredacted copies of seven warrants against him. In April the government responded. They provided a list of the affidavits they had already given Manafort by then:

The government explained in that response that most of what Manafort was still trying to unseal involved names of people who had provided information to the government, other targets of the affidavits, or information on other investigations into Manafort. On May 29, 2018, Amy Berman Jackson refused Manafort’s request for any further unsealing.

The DC-based warrants that Manafort was trying to further unseal were (I’ve put links where the affidavits have been unsealed):

Ultimately, ABJ refused any further unsealing of the pmanafort or the 5 AT&T warrant affidavits.

Which means (as far as I know) we’ve never seen the full pmanafort warrant. Which is interesting, because here’s what that looks like in the docket: 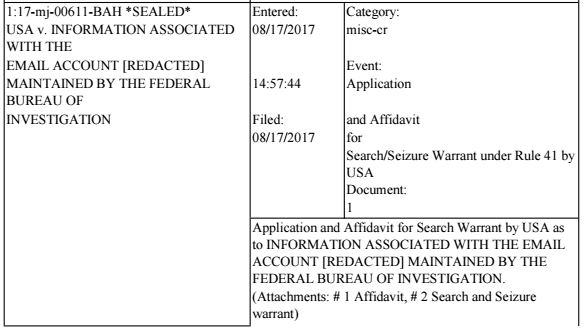 The docket entry for the Gates and Kilimnik email is unremarkable, showing that Rackspace hosted the email.

But for some reason, in the DC docket, the Manafort entry shows that the FBI maintained Manafort’s email. FBI may have done that (and possibly done it via a VA court, where the earlier parts of this investigation were) to manage the foldering communication that Manafort and Kilimnik used, in which Kilimnik would draft an email but not send it as a way to communicate with Manafort while making the email harder to intercept.

Among the things the FBI discovered by thwarting that foldering technique is that Manafort continued to work with Kilimnik on a plan to carve up Ukraine into 2018.

Livestream Tonight: The Investigation — Mueller Report in 10 Acts [UP... According to Hope Hicks’s Testimony, Trump Should Applaud Paul Manafort’s...