Whip It Good: Impeachment Inquiry — Do You Even Math? [UPDATED]

You may have been following the impeachment inquiry whip count posted here last week.

You may also notice though we agree that an impeachment inquiry is necessary, not everybody at this site agrees how to go about it.

All the shouting and the namecalling won’t change this fact: With 433 active House seats it will take 218 votes (allowing 1 safety vote) to pass a resolution to begin an impeachment inquiry; we are now at 85 votes or 39% of the necessary votes.

House Speaker Nancy Pelosi could try to put this up for a vote right now but she’d lose. It’d be obvious to that corrupt orange monster and his evil minions there was absolutely no Congressional check on his power. Trump, his minions and sponsors would perceive this failure as a permission slip to continue their crime spree, possibly ramping up to even worse.

One thing can change this dynamic.

You can also identify a primary candidate running against the most resistent representatives, make a donation to them, volunteer to help their campaign, and then call your intransigent rep and let them know you are going to ensure they are primaried because they are failing their oath of office.

You can share Law Works’ production of The Investigation recorded last week if friends and family haven’t read the Mueller report and don’t understand that Trump obstructed justice. Now bmaz thinks this production was a stunt but treat it as a podcast: talk a friend or family member into a long car ride over the holiday and weekend, and play The Investigation while you’re on the road. Talk about the report and the obstruction — and then persuade them to help make calls.

About those rallies outside media offices: we could have rallies outside local offices of members of Congress, but there’s no guarantee media will treat these as newsworthy. They didn’t cover any of MoveOn’s rallies this month for example. So hold them at media offices, like outside the biggest radio or television stations in your market. Make it impossible to avoid coverage. I’d like to tell you to avoid the Sinclair-owned ones but if the local station picks up the story, it’s a double win. If you organize one with a group be sure to prepare clear, succinct talking points and have a designated spokesperson deliver them.

You can wallpaper your municipality with home printed materials to drum up more support. Feel free to use this graphic: 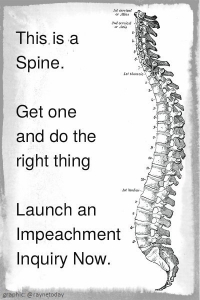 Post it at the library, grocery store, coffee shop, wherever there’s a bulletin board open for public use.

Is this an old school approach? Sure, but let’s face it — the new school efforts aren’t breaking through.

Updated whip count follows below; share in comments any new announcements by House members throwing support behind an impeachment inquiry.

Carrots are good as well as sticks; while your organization badgers Pelosi for fundraising now, keep in mind the entire House must raise money to run in 2020. Reward the representatives who are committing to voting for an impeachment inquiry with donations.

Updated spreadsheet with count. Note that 16 of 25 Democratic House Judiciary Committee members are now in support of an inquiry since last week — that’s 67%.

Still zero GOP support save for Justin Amash; meanwhile the RNC is dishing out tickets for a non-campaign campaign event using taxpayer funded resources limiting access to a taxpayer-funded Fourth of July holiday. Surprised none of these spineless leeches are sucking up to Moscow for the holiday.