Democrats Are Setting Themselves Up to Fail on Mueller Hearings

In a House Judiciary Committee hearing about the most controversial topic of the day 12 years ago, Robert Mueller provided testimony that sharply contradicted the sworn testimony of the Attorney General. He confirmed that the March 10, 2004 hospital confrontation between Jim Comey and the White House concerned a disagreement about the legality of the Stellar Wind warrantless wiretapping program, contrary to the earlier claims of Alberto Gonzales.

“I had an understanding that the discussion was on a N.S.A. program,” Mr. Mueller said in answer to a question from Representative Sheila Jackson Lee, Democrat of Texas, in a hearing before the House Judiciary Committee.

Asked whether he was referring to the Terrorist Surveillance Program, or T.S.P., he replied, “The discussion was on a national N.S.A. program that has been much discussed, yes.”

Mr. Mueller said he had taken notes of some of his conversations about the issue, and after the hearing the committee asked him to produce them.

In a four-hour appearance before the Senate Judiciary Committee on Tuesday, Mr. Gonzales denied that the dispute arose over the Terrorist Surveillance Program, whose existence was confirmed by President Bush in December 2005 after it had been disclosed by The New York Times. Mr. Gonzales said it centered on “other intelligence activities.”

That event, like Russian investigation, involved a constitutional crisis and uncertain matters of law. It involved issues made more controversial by Jim Comey’s at times imperfect efforts to uphold principle. Mueller’s testimony specifically confirmed suspicions about the deceit and criminal exposure of the Attorney General, possibly contributing to his resignation a month later.

Sheila Jackson Lee — who remains on HJC — asked the question, and Mueller answered truthfully, and then provided evidence to back up his testimony.

And yet, even after studying Mueller’s past testimony to Congress (presumably including that hearing), House Democrats have themselves convinced that Mueller won’t be all that forthcoming in his hearing next week.

“I don’t think Mr. Mueller, based on everything I know about him, that anyone should expect any major departure from the contents of the report,” said Rep. David Cicilline, a Rhode Island Democrat on the Judiciary Committee. “I do think the contents of the report are so significant and so damning that when Mr. Mueller brings them to life and actually tells the American people … it will have an impact.”

The committees recognize that Mueller is a reluctant witness, and has stated he does not intend to answer questions beyond the contents of his report. The committee aides said they planned to respect Mueller’s desires but noted Congress isn’t bound by such limits. The aides anticipate questions will go beyond what’s written in the report, such as asking Mueller whether certain episodes detailed would have been crimes had they not involved the President — after Mueller said that his office followed Justice Department legal opinion that a sitting president cannot be indicted.

Mueller’s long government career has given the two committees plenty of material to study from Mueller’s past congressional appearances. The bottom line is they don’t expect Mueller to readily volunteer information, aides say, particularly given that he doesn’t want to testify before Congress.

As Jackson Lee demonstrated years ago, a properly phrased question will elicit an honest answer from Mueller.

But that’s not my main complaint about the reported preparations for Mueller’s testimony next week: it’s that Democrats have locked themselves into a division of labor — with HJC focusing on the evidence showing Trump obstructed justice and the House Intelligence Committee focusing on details of Trump’s enthusiasm for the Russian attack — that leaves out the larger framework of the investigation (and aftermath), may not touch on the area that, given the focus of his press conference, Mueller’s likely to be most forthcoming about (the extent of the Russian operation), and threatens to make a weaker case for both obstruction and “collusion.”

I hope to finally write my narratology of the Mueller Report to lay out the latter point. My questions for Mueller (which I’ll update before next Wednesday) include some that — like the Jackson Lee question twelve years ago — are factual questions that may do more to illuminate the actions of others than questions designed solely to get Mueller to recapitulate what’s already in the report.

This report was not, as most people commenting on it seem to believe, a report “of what Mueller found.” Rather, it is strictly limited to prosecutorial decisions, and as such doesn’t include evidence Mueller obtained that’s not important to explain why he chose to charge people or not. 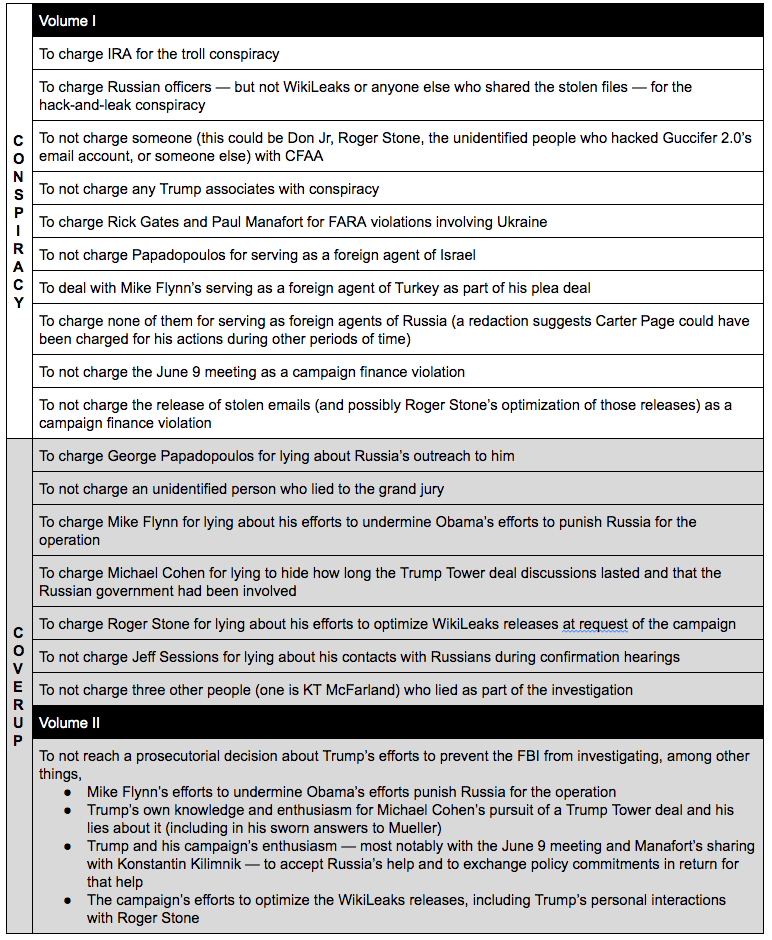 As noted with the shading the break between Volume I and Volume II is not actually a break between the conspiracy investigation (Russia’s interference in the election and Trump Associates’ ties with Russia) and the obstruction investigation (matters arising from the investigation). Prosecutorial decisions relating to the cover-up appear in both Volume I and Volume II. It’s unclear why Mueller organized it like that (this would actually be an interesting question); perhaps he did it because he didn’t reach a prosecutorial decision about Trump or perhaps because he wanted to provide an impeachment referral for Congress.

But the effect of the organization is that it severs the discussion of the suspicious actions from the efforts to cover up those actions.

To illustrate why this is important, consider the June 9 meeting. The actual events behind that are:

From the point of view of the crime of obstruction of justice, the June 9 meeting is the weakest case, in part because Don Jr avoided getting caught in a lie about it (and so was not charged in parallel with Flynn and Stone). Given their focus on treating Volume II as an obstruction of justice impeachment referral rather than the complete cover-up, HJC is not treating this incident. But it’s one of the most damning examples showing that Trump and his family acted to accept Russian help.

And consider how Manafort’s sharing of polling data will get watered down with this approach to questioning. One of the most obvious ways to illustrate the impact of Trump’s obstruction is to lay out that Mueller was never able to establish why Manafort was trading Ukraine away at a meeting where he also discussed how to win MI and WI. It looks like a smoking gun, but Mueller was never able to fully investigate it (Manafort’s use of encryption helped things along here, too). And one key reason why he was never able to investigate it is because Manafort believed Trump would pardon him if he lied, and he did lie.

In other words, dividing the questioning the way reports say the committees will separates a discussion of the cover-up from the actions Trump covered up. That, in turn, makes it a lot harder to show that one reason Mueller didn’t collect enough evidence to charge a conspiracy is because of that cover up.

Freedom And Equality: Freedom From Domination Part 2 The Steele Dossier and the Mueller Investigation: Michael Cohen