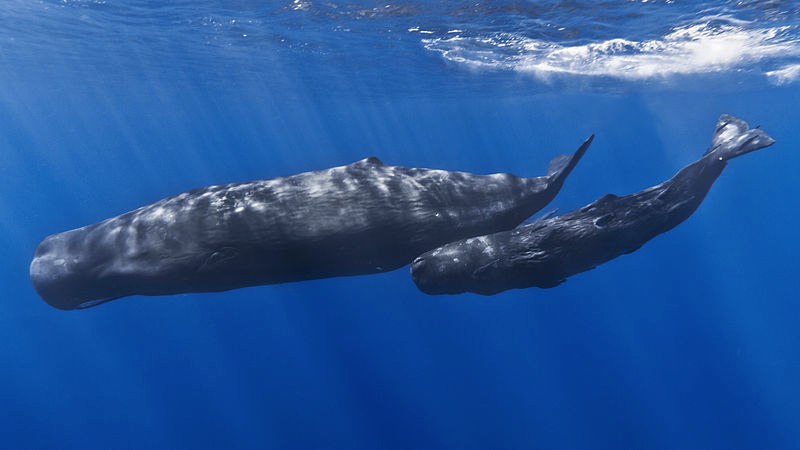 I’ve finished Moby Dick, and it’s a fitting tale for a Summer’s reading. If, as I wrote here, Ishmael is the All-American Boy, Ahab is a hero fit for an Ayn Rand novel.

In the last third of the book, Ahab continues his search for the Great White Whale despite an increasingly obvious series of omens warning him off, and of other ships warning of the dangers. Ishmael paints a broader picture of Ahab by relating several soliloquies. They show a more ruminative side of Ahab, one alert to the real world around him, and the pity and terror it inspires. There’s a poetic meditation inspired by a dying whale in Chapter 116, for example.

… life dies sunwards full of faith; but see! no sooner dead, than death whirls round the corpse, and it heads some other way.

But this inner life does not touch Ahab’s intent to kill Moby Dick. He ignores all the omens and warnings, omens so clear that his crew are muttering. He drives them on til they first see the great whale. That night, Ahab gives his final soliloquy, this one to Starbuck (Chapter 132). Here’s a brief excerpt:

“Oh, Starbuck! it is a mild, mild wind, and a mild looking sky. On such a day — very much such a sweetness as this — I struck my first whale — a boy-harpooner of eighteen! Forty — forty — forty years ago! — ago! Forty years of continual whaling! forty years of privation, and peril, and storm-time! forty years on the pitiless sea! for forty years has Ahab forsaken the peaceful land, for forty years to make war on the horrors of the deep! … the madness, the frenzy, the boiling blood and the smoking brow, with which, for a thousand lowerings old Ahab has furiously, foamingly chased his prey — more a demon than a man! — aye, aye! what a forty years’ fool — fool — old fool, has old Ahab been! Why this strife of the chase? why weary, and palsy the arm at the oar, and the iron, and the lance? how the richer or better is Ahab now?

Starbuck urges Ahab to turn back and to live his life on the land. Ahab doesn’t seem to hear. Another excerpt:

“What is it, what nameless, inscrutable, unearthly thing is it; what cozening, hidden lord and master, and cruel, remorseless emperor commands me; that against all natural lovings and longings, I so keep pushing, and crowding, and jamming myself on all the time; recklessly making me ready to do what in my own proper, natural heart, I durst not so much as dare? Is Ahab, Ahab? Is it I, God, or who, that lifts this arm?

Ahab has no answer to this question, and doesn’t even try to find one. Ahab just knows he is driven to extract whale oil by killing every single whale. Ishmael even asks in Chapter 105 if humans can kill all the sperm whales in their insatiable search.

What does drive Ahab? Ishmael doesn’t say. Maybe the lust for money has blended with the bloodlust of killing whales into a single inhuman force, coupled with an insane anger directed at the single whale that cut away his leg.

To me Ahab seems like an Ayn Rand character: a capitalist driven to produce whale oil by grit and determination, overcoming every obstacle placed in the way of every truly productive person, and bending others to do the same. Ahab, like other capitalists, is driven to extract every last drop of money from every last layer of nature and human beings. RAtional thought, contemplation of the consequences, these have no place in this crazed struggle.

Of course, in an Ayn Rand novel, on the third day Ahab would have slain Moby Dick, flensed it, and found enough sperm oil and ambergris to float a boat, bringing fame and profit for Ahab and confounding the socialist whale protectors.

Ahab ignores every warning. And everyone but Ishmael drowns. And all the oil they had extracted went to the bottom of the sea.

There Are More Charges Pending for George Nader or an Accomplice Aspiring Director of National Intelligence John Ratcliffe Does Not Want DOJ’s...