One of Robert Mueller’s most remarkable lines in his testimony to the Judiciary and Intelligence Committees last week was a follow-up in the latter hearing to a Raja Krishnamoorthi question about how Mike Flynn’s lies exposed him to compromise.

Two and a half years after Flynn was fired, the FBI is still trying to figure out what kind of damage his venality and lies put America at risk

It should surprise no one following closely that the FBI is still looking into different aspects of how Flynn’s lies — both about Russia and about Turkey — exposed him to compromise. After all, a footnote in the Mueller Report that should describe what happened to the counterintelligence investigations into Flynn remains redacted to protect ongoing investigations.

There’s still a redaction in Flynn’s cooperation addendum that likely pertains to something that went through Mueller but cannot yet be unsealed, which I suspect is a counterintelligence investigation. In March, prosecutors in Bijan Kian’s case said at least one other district had an ongoing investigation into matters relating to Flynn (after correcting himself for saying districts, plural, had such investigations). And just recently, Kian’s lawyers disclosed that prosecutors had told them there was classified evidence showing Ekim Alptekin’s efforts to cultivate Flynn and through him, Trump, outside of his consulting company.

Prosecutors wrote to lawyers for Flynn’s ex-lobbying partner Bijan Kian that the US government was “in possession of multiple, independent pieces of information relating to the Turkish government’s efforts to influence United States policy on Turkey and Fethullah Gulen, including information relating to communications, interactions, and a relationship between Ekim Alptekin and Michael Flynn, and Ekim Alptekin’s engagement of Michael Flynn because of Michael Flynn’s relationship with an ongoing presidential campaign, without any reference to the defendant of FIG.”

Then there are the new materials released by the Oversight Committee showing how willing Flynn was to entertain a corrupt proposal to sell nukes to Saudi Arabia. 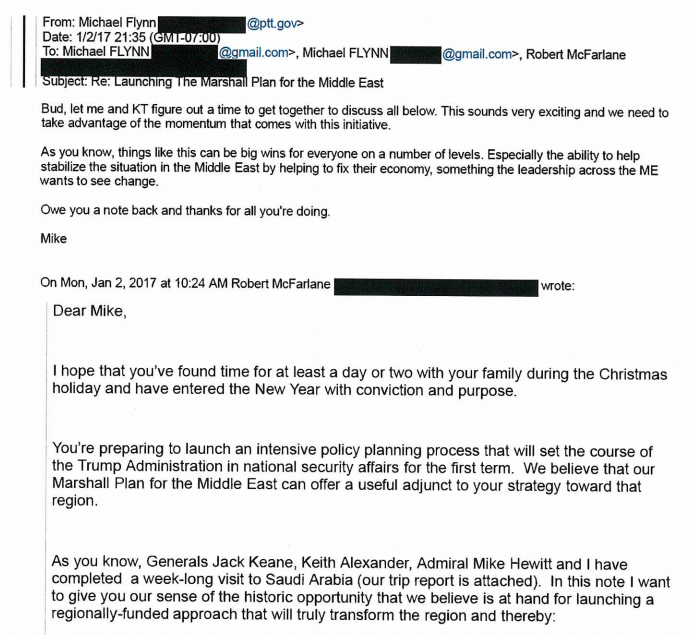 (Note, it’s a bit ironic that one of the other National Security Advisors to plead guilty to a crime spoke to Flynn of the Christmas vacation during which he had tried to secretly undermine Barack Obama’s punishment of Russia for its interference in the election spoke to Flynn of his “conviction” in the new year.)

By August 2017, Flynn was being investigated for four things, and it’s not clear we yet know all of them.

Now that Bijan Kian has been convicted, Flynn may be scot free (though the timing on his sentence will be a bit awkward, given that Judge Trenga may still overturn one or both of his convictions in early September, after Flynn’s next status hearing). But, in one of the big disclosures Mueller made last week, he revealed that the FBI is still investigating all the ways the General’s venality put the United States at risk in his short time as Trump’s top national security advisor.

And that’s just one aspect of the most important confirmations of the Mueller hearings.

When the Mueller Report came out (and even more so, when the four page Barr summary came out), denialists proclaimed that the Report (that is, the Barr summary) proved that concerns about Trump being compromised by Russia had been proven false — the substantive concern that led to the Trump investigation in the first place. The damning details of Trump’s interactions with Russia left unmentioned in the Mueller Report, as well as the descriptions of the separate FBI track of the counterintelligence investigation, already suggested that wasn’t true.

But on several different occasions, Mueller made it clear that nothing in his report rules out Trump or Flynn or several other people having been blackmailed by Russia.

To be clear, Mueller makes it clear that Trump is not a “Russian agent,” meaning the report does not present evidence that Trump is willfully doing Russia’s bidding.

WENSTRUP: So a member of this Committee said President Trump was a Russian agent after your report was publicly released. That statement is not supported by your report, correct?

MUELLER: That is accurate. Not supported.

But three other times, Mueller does not dispute and at times agrees that Trump and his flunkies’ actions pose a blackmail threat. He didn’t disagree on this point with Lou Correa:

CORREA: I may begin because of time limits we have gone in depth on only five possible episodes of obstruction. There’s so much more. And I want to focus on another section of obstruction which is the president’s conduct concerning Michael Flynn, the president’s national security advisor.

In early 27, the White House Counsel and the president were informed that Mr. Flynn had lied to government authorities about his communications with the Russian ambassador during the Trump campaign in transition. Is this correct?

CORREA: If a hostile nation knows that a U.S. official has lied publicly that can be used to blackmail that government official, correct?

With Adam Schiff, Mueller seemingly agreed that Flynn’s lies could expose him, though he refused to answer Schiff’s question about the President specifically:

SCHIFF: You have, I think we can all see that. And befitting the times, I’m sure your reward will be unending criticism, but we are grateful. The need to act in ethical manner is not just a moral one, but when people act unethically it also exposes them to compromise particularly in dealing with foreign powers, is that true?

SCHIFF: Because when someone acts unethically in connection with a foreign partner, that foreign partner can expose their wrongdoing and extort them.

SCHIFF: And that conduct — that unethical conduct can be of a financial nature if you have a financial motive or elicit business dealing, am I right?

SCHIFF: It could also just involve deception. If you are lying about something that can be exposed, then you can be blackmailed.

SCHIFF: In the case of Michael Flynn, he was secretly doing business with Turkey, correct?

SCHIFF: That could open him up to compromise that financial relationship.

SCHIFF: He also lied about his discussions with the Russian ambassador and since the Russians were on the other side of the conversation, they could have exposed that, could they not?

SCHIFF: If a presidential candidate was doing business in Russia and saying he wasn’t, Russians could expose that too, could they not?

MUELLER: I leave that to you.

But Krishnamoorthi’s full exchange with Mueller not only gets him to acknowledge that Trump lied about his Trump Tower deal (and continued to lie during the investigation), but establishes that at least some of Trump’s possible vulnerabilities because of his financial ties were not included in Mueller’s investigation.

KRISHNAMOORTHI: Director, since it was outside the purview of your investigation, your report did not reach counterintelligence conclusions regarding the subject matter of your report.

KRISHNAMOORTHI: For instance, since it was outside your purview, your report did not reach counterintelligence conclusions regarding any Trump administration officials who might potentially be vulnerable to compromise of blackmail by Russia, correct?

MUELLER: Those decisions probably were made in the FBI.

KRISHNAMOORTHI: But not in your report, correct?

MUELLER: Not in our report. We avert to the counterintelligence goals of our investigation which were secondary to any criminal wrongdoing that we could find.

KRISHNAMOORTHI: Let’s talk about one administration official in particularly namely President Donald Trump. Other than Trump Tower Moscow, your report does not address or detail the president’s financial ties or dealings with Russia, correct?

KRISHNAMOORTHI: Similarly since it was outside your purview your report does not address the question of whether Russian oligarchs engaged in money laundering through any of the president’s businesses, correct?

KRISHNAMOORTHI: And of course your office did not obtain the president’s tax returns which could otherwise show foreign financial sources, correct?

MUELLER: I’m not going to speak to that.

MUELLER: I’m not going to get in to that.

KRISHNAMOORTHI: Were you instructed by anyone not to investigate the president’s personal finances?

KRISHNAMOORTHI: Mr. Mueller, I’d like to turn your attention to counterintelligence risks associated with lying. Individuals can be subject to blackmail if they lie about their interactions with foreign countries, correct?

KRISHNAMOORTHI: Thank you. As you noted in Volume two of your report, Donald Trump repeated five times in one press conference, Mr. Mueller in 2016 “I have nothing to do with Russia.”

That’s not to say they have — as Mueller said, the report does not show Trump to be an agent of Russia.

But the Mueller Report does not say, one way or another, whether Russia has been able to manipulate Trump by getting him to lie to America about his entanglements with Russia.