Last Monday, Republican huckster lawyer Joe Di Genova promised — among other things — that the documents the frothy right has been promising will blow up the Russian investigation would be released Wednesday — that is, a week ago. The frothy right — which for some unfathomable reason is following sworn liar and all around dope George Papadpoulos like sheep — believes that a transcript of the interactions between him and Stefan Halper somehow includes evidence that undercuts the case that there was probable cause that Carter Page was an agent of a foreign power.

An exchange from Sunday, however, confirms that the transcript in question shows that Papadopoulos was actively lying in September 2016 about his ties to Russia. In an exchange with Papadopoulos, Maria Bartiromo confirmed that the transcript in question is the one on which the former Trump flunkie told Stefan Halper that working with Russia to optimize the release of emails stolen from Hillary would be treason.

Bartiromo said that she had spoken with Papadopoulos on Saturday night, during which he told her that the recorded conversation in question involves him and FBI informant Stefan Halper in September 2016. Papadopoulos allegedly pushed back against Halper’s suggestion that he or the Trump campaign would have wanted Russia to release the Democratic National Committee emails it hacked in 2016.

Bartiromo then said that “George Papadopoulos told me last night” that the transcript Gowdy was referring to is from a conversation Papadopoulos had with Halper in London at the Sofitel Hotel in London where she recounted that, according to Papadopoulos, Halper questioned Papadopoulos, saying, “Russia has all of these e-mails of Hillary Clinton and you know, and when they get out that would be really good for you, right? That would be really good for you and the Trump campaign, if all those e-mails got out, right?”

But Bartiromo says Papadopoulos responded to Halper by saying “that’s crazy,” “that would be treason,” “people get hanged for stuff,” and “I would never do something like that.”

That means it’s the same transcript that Mark Meadows — questioning Papadopoulos about what he learned not from his lawyers (who said there was no misconduct with Papadopoulos) but from the John Solomon echo chamber — asks about here.

Mr. Papadopoulos. That’s I guess what John Solomon reported a couple days ago.

Mr. Meadows. So are you aware of a transcript existing? I mean —

Mr. Papadopoulos. I wasn’t aware of a transcript existing personally.

Mr. Meadows. So you have no personal knowledge of it?

Mr. Papadopoulos. I had no personal knowledge, no.

Mr. Meadows. But you think that he could have been recording you is what you’re suggesting?

Mr. Meadows. All right. Go ahead.

By Papadopoulos’ own memory, he said three things in a mid-September meeting with Stefan Halper:

Papadopoulos pled guilty, under oath, with the advice of counsel who knew the contents of this interview, that in fact he did know about the Trump campaign benefitting from Hillary Clinton emails, because he had been told about it in April 2016. So that’s one lie that this supposed exculpatory transcript records him telling.

I’m more interested in the second lie: that he “really has nothing to do with Russia.”

He made that statement sometime around September 16, 2016, in London. A month earlier, Papadopoulos had very different plans for a mid-September trip to London. He planned a meeting in London with the “Office of Putin,” that would hide any formal tie with the campaign. 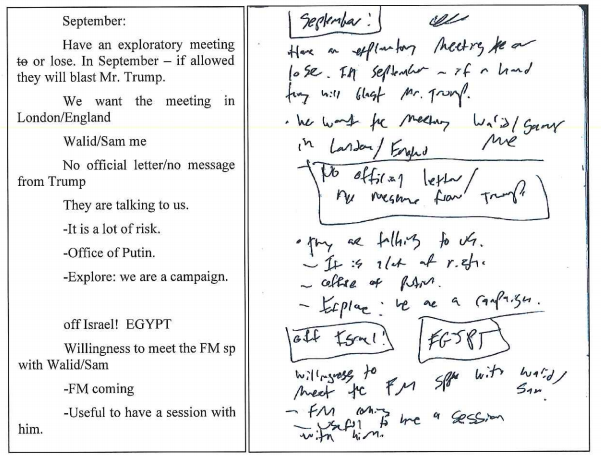 The frothy right makes much of the fact that that meeting, as far as we know, did not take place. Though there is a written record of Sam Clovis — who probably was not entirely forthcoming in a grand jury appearance — encouraging Papadopoulos and Walid Phares to pursue such a meeting if feasible. More importantly, a year later, at a time when he was purportedly cooperating, Papadopoulos refused to cooperate in transcribing these notes, meaning he was still covering up the details about the fact that as late as mid-August the Trump campaign had plans to have a secret meeting at precisely the same time and in the same place that this Halper transcript was recorded.

Papadopoulos declined to assist in deciphering his notes, telling investigators that he could not read his own handwriting from the journal. Papadopoulos 9/19/17 302, at 21. The notes, however, appear to read as listed in the column to the left of the image above.

Worse still, Papadopoulos continued to show great enthusiasm for Russia even after the meeting where he claimed he “really has nothing to do with Russia.” He proudly alerted Joseph Mifsud of his September 30 column attacking sanctions against Russia.

On or about October 1, 2016, PAPADOPOULOS sent Mifsud a private Facebook message with a link to an article from Interfax.com, a Russian news website. This evidence contradicts PAPADOPOULOS’s statement to the Agents when interviewed on or about January 27, 2017, that he had not been “messaging” with [Mifsud] during the campaign while “with Trump.”

This column led the Trump campaign to sever ties with Papadopoulos.

Papadopoulos was dismissed from the Trump Campaign in early October 2016, after an interview he gave to the Russian news agency Inter/ax generated adverse publicity.492

And in spite of claiming he had “nothing to do with Russia” sometime in mid-September, immediately after the election Papadopoulos pursued deals with Russia, via Sergei Millian.

On November 9, 2016, shortly after the election, Papadopoulos arranged to meet Millian in Chicago to discuss business opportunities, including potential work with Russian “billionaires who are not under sanctions.”511 The meeting took place on November 14, 2016, at the Trump Hotel and Tower in Chicago.512 According to Papadopoulos, the two men discussed partnering on business deals, but Papadopoulos perceived that Millian’s attitude toward him changed when Papadopoulos stated that he was only pursuing private-sector opportunities and was not interested in a job in the Administration.5 13 The two remained in contact, however, and had extended online discussions about possible business opportunities in Russia. 514 The two also arranged to meet at a Washington, D.C. bar when both attended Trump’s inauguration in late January 2017.515

In short, the transcript (if it reflects Papadopoulos claiming he had nothing to do with Russia) is not exculpatory. On the contrary, it’s proof that Papadopoulos lied about at least two of three things Halper grilled him about.

The frothy right doesn’t seem to care that this transcript proves Papadopoulos lied, even before he knew he was under legal scrutiny for ties to Russia he continued to pursue even after being questioned about them.

The frothy right is using it differently. Trey Gowdy claims the transcript proves that the FBI was questioning “Trump campaign officials” (Papadopoulos was never paid by the campaign and would be “fired” two weeks later for his open enthusiasm for sanctions relief) about the campaign.

Gowdy told Bartiromo that this transcript “certainly has the potential to be” a game changer and said that he was “lost” and “clueless” as to why it hadn’t been made public yet, stating that he didn’t think it contained any information that would have an impact on relationships with our allies.

Gowdy claimed that if the transcripts showed that the FBI was “veering over into the campaign or your [the FBI’s] questions are not solely about Russia, then you [the FBI] have been misleading us for two years.”

Here’s how that belief looked when Mark Meadows first mainstreamed it last fall.

Mr. Meadows. Okay. And then what did he do from there?

Mr. Papadopoulos. And then I remember he was — he was quite disappointed. I think he was expecting something else. There was a —

Mr. Meadows. So he thought you would confirm that you were actually benefiting from Hillary Clinton’s email dump?

Mr. Papadopoulos. Perhaps that’s why he was disappointed in what I had to tell him, which was the truth.

Mark Meadows is pretty dumb. But this line of questioning is pretty shrewd (and may show some awareness of details that were not, at this point, public). His purportedly slam dunk question, proving misconduct, is whether Papadopoulos — who has, at times, been referred to as a “coffee boy” and was not a paid member of the campaign — had personal interaction or “knowledge of anybody on the campaign [] working with the Russians in any capacity to get these emails and use them to the advantage.”

Papadopoulos claimed he did not have that knowledge.

But the coffee boy was not privy to those discussions.

Finally, let’s turn to the really bizarre part of what is supposed to be a smoking gun.

Trey Gowdy claims to believe that a transcript showing that Papadopoulos was lying to hide his ongoing ties with Russia in September 2016 — the contents of which Papadopoulos’ lawyers appear to have known about, which did not persuade them any misconduct had occurred with their client — should have been disclosed to the FISA Court for an application targeting Carter Page.

Gowdy also claimed that the potentially exonerating info was misleadingly concealed from the Foreign Intelligence Surveillance Court by the FBI, and that this is not the only mysterious transcript yet to be released.

Now, I could be wrong about this. After all, Trey Gowdy is one of the few people who has reviewed the unredacted Page warrant, though in the past has said there was clearly enough evidence to justify the warrant, something the Mueller Report substantiates (in part by making clear that Page told the FBI he’d happily provide non-public information to known Russian spies). But it appears that Papadopoulos appears in Page’s FISA application because events he swore under oath happened suggest that Russia was trying to reach out to the Trump campaign (for which there is abundant evidence), in part by offering energy deals (which is one thing Papadopoulos was still chasing even after November 2016), and there was reason to believe both Papadopoulos and Page had gotten advanced notice of the July 22 DNC email drop.

Some of those allegations about Page — specifically about whether he was alerted to kompromat harming Hillary when he was in Moscow in July 2016 — may not be true (though Mueller concluded that it remained unresolved). But they were true about Papadopoulos.

Establishing proof that Papadopoulos was lying to people about his ties to Russia in the weeks before his role was included in a FISA application doesn’t really make his inclusion exculpatory. On the contrary, it makes it more justifiable.

The frothy right is so spun up by con man George Papadopoulos that they have run to the TV cameras and claimed that a transcript that shows Papadopoulos was lying to hide his ongoing efforts to establish ties with Russia was in some way exculpatory. I mean, sure, Bill Barr might believe this tale. But no one else should.