Biden’s Opposition to Medicare for All: It’s All About the Billionaires, Baby 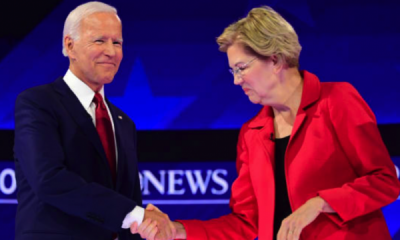 [Editor’s Note – this is a guest post by a friend of ours here at the Emptywheel Blog, Bob Lord. Bob is a longtime tax and finance attorney with some very salient thoughts on why the centrist Democrats are pushing back so hard on Medicare For All. One other note, we here at Emptywheel have purposefully not engaged on behalf of any particular candidate in the primary process, but the issues in play are fair game.]

Joe Biden has lots of reasons why he opposes the Medicare for All plan favored by Bernie Sanders and Elizabeth Warren.

The list goes on, but do these reasons reflect Biden’s actual worries? Surely, he’s seen the studies that show Medicare for All would drive costs down, not up, as removing health insurance company profits and administrative costs from American health care totally changes the system’s accounting dynamics. Yes, an expanded Medicare would require administrative expenses, but nowhere close to the expenses that our current system requires.

Biden also knows Americans would welcome the chance to swap their private health insurance for Medicare. Don’t believe me? Speak to someone between the ages of 60 and 64 who’s relatively healthy. Ten to one she has her fingers crossed hoping to make it to age 65 without a major health challenge, so she can qualify for Medicare and never have to confront the insufficiency of her wonderful private insurance plan.

And very few Americans, we must keep in mind, choose their health insurance provider. Most of us get insurance through our employers. Employers choose the least expensive plan for all employees collectively, without regard to the needs and desires of individuals.

Given that Joe Biden’s stated reasons for opposing Medicare for All don’t pass the smell test, what could be the real reason for his opposition?

Could Biden simply be beholden to the health insurance industry and Big Pharma? Perhaps, but I suspect that something larger — the overall wealth of our wealthy — may be at play. After all, it’s not like health insurers and pharmaceutical companies are going to have his back come general election time.

Consider the difference between how Joe Biden, on the one hand, and Bernie Sanders and Elizabeth Warren, on the other, view the billionaires and centimillionaires who make up America’s super rich. Sanders believes the greed of America’s billionaire class threatens the social fabric of our country and has proposed a significant increase in the federal estate tax on grand fortunes. Warren has proposed a 2 percent annual wealth tax on all fortunes in excess of $50 million.

Biden’s differences with Warren and Sanders go deep. He has assured his rich donors — at big-dollar fundraising events — that their lifestyles will not change if he’s elected. Biden, whose donor list includes at least 13 ten-digit fortunes, has made it clear that he doesn’t think billionaires bear any more responsibility for America’s woes than any of the rest of us.

Just this week, he voiced his opposition to policies that would make it harder to become a billionaire.

But why would billionaires and centimillionaires particularly care whether we have Medicare for All versus the Obamacare-with-a-public-option plan Biden favors?

To answer that question, consider the fundamental difference between Obamacare and Medicare for All: who pays. Under Obamacare, individuals pay for their health care, through the insurance premiums they pay and their out-of-pocket expenses for the charges their insurance policies don’t cover. The government subsidizes insurance for lower income Americans through Medicaid, but the bulk of health insurance costs are paid by individuals or their employers.

The public option, Biden’s proposed fix to Obamacare, won’t change any of this. Even if every American healthcare consumer chose the public option, putting the private health insurance industry out of business in the process, individuals still would be responsible for their own health care costs.

The great majority of Americans live their lives as both health care consumers and taxpayers. Under Medicare for All, they would see an elimination of both insurance premiums and out-of-pocket medical costs. They would also see a tax increase, but ordinary Americans would save substantially more in health care costs than they’d pay in increased taxes.

But those billionaires and centimillionaires on Joe Biden’s donor list? Their tax increases would dwarf any savings they see in personal healthcare expense. Some could see seven figure tax increases.

Viewed through the billionaire lens, Biden’s loud opposition to Medicare for All makes distinct political sense. He needs billionaires to fund his White House aspirations, which still drive him three decades out from his first presidential run in 1988. He’s not only convinced himself that his billionaire supporters pose no threat to our social fabric, he even seems to believe that any health care reform that puts the squeeze on billionaire fortunes does pose a threat.

All in all, a classic case of why ambition often blinds us. In a 2018 speech, just a sentence or two after saying the billionaires he’s courting aren’t a problem, Biden lamented that the income gap in America is yawning.

What Biden’s ambition won’t let him see: Billionaires don’t exist in isolation. We have approximately 700 billionaires today in the United States. We have a larger number of half-billionaires and a still larger deep-pocket cohort of centimillionaires. And so on. Which leaves our top 1 percent controlling close to half the country’s wealth and the country with an income gap that Biden openly recognizes is “yawning” and, obviously, a problem.

In other words, those billionaires Biden’s won’t let himself see as a worry really are inseparable from the yawning income gap that he knows is a problem.

Sanders and Warren, by comparison, are clear-eyed. They can see that when the gap is so yawning that treatable or preventable injuries and illnesses are killing Americans who can’t afford healthcare and bankrupting millions of others, the only answer is that society — through taxation — must assume the cost of healthcare. Other countries, like Canada, recognized this reality decades ago.

And when America’s billionaires, with Joe Biden as one of their many mouthpieces, stand in the way of that process because they don’t want their taxes to increase, their greed tears at the fabric of American society.

Joe Biden can’t see that. His two leading rivals sure do.

[Robert J. Lord, a tax lawyer and former Congressional candidate, is an associate fellow at the Institute for Policy Studies. Bob previously served as an adjunct faculty member at the Arizona State University School of Law. Bob’s work focuses on the relationship of tax law to inequality. He contributes to both the Inequality.org website and to OtherWords, the Institute’s national syndicated editorial service. Bob also is a staff member at Blog For Arizona, the leading political blog in Arizona.]