How Roger Stone’s Trial Relates to the Ukraine Scandal

The White House released the readout from one (but not all) of the calls involved in the whistleblower complaint. It shows that before Trump asked Volodymyr Zelensky for help framing Joe Biden, he first asked Zelensky for help attacking Crowdstrike.

The President: I would like you to do us a favor though because our country has been through a lot and Ukraine knows a lot about it. I would like you to find out what happened with this whole situation with Ukraine, they say Crowdstrike … I guess you have one of your wealthy people… The server, they say Ukraine has.it. There are a lot. of things that went on, the whole situation. I think you are surrounding yourself with some of the same people. I . would like to have the Attorney General call you or your people and I would like you to get to the bottom of it. As you saw yesterday, that whole nonsense ended with a very poor performance by a man named Robert Mueller, an incompetent performance, but they say a lot of it started with Ukraine. Whatever you can do, it’s very important that you do it if that’s possible.

As with the sections involving the request on Biden, this one includes ellipses, hiding part of Trump’s ask. Also like those sections, this one suggests Bill Barr is involved in his improper request.

A request about Crowdstrike more directly addresses matters of intelligence — the attribution of the 2016 operation to Russia — than an effort to frame Joe Biden.

And this Crowdstrike request is what ties the call obviously to the timing — the day after the Mueller testimony gave Trump the belief he had weathered the Russian investigation.

Only, Trump is not clear of the impact of the Mueller investigation. On the contrary, if all goes on schedule, prosecutors will present abundant evidence of what even Mark Meadows calls “collusion,” the campaign’s effort to optimize the WikiLeaks releases, in Roger Stone’s November trial. As I have noted, in addition to Steve Bannon and Erik Prince, the trial will talk about Stone’s texts and calls to four different Donald Trump phone numbers, as well as his aides and bodyguard, Keith Schiller. (This screen cap comes from a list of stipulated phone numbers and emails that has since been sealed.) 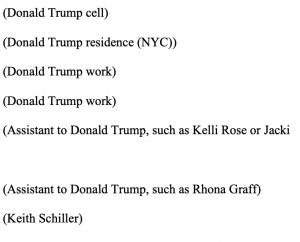 The Stone trial (if it goes forward–I still have my doubts) will show that Trump was personally involved in these efforts and got repeated updates directly from Stone.

And a key strand of Stone’s defense is to question the Crowdstrike findings on the hack. Stone has been pursuing this effort for months — it’s what almost got him jailed under his gag. And while Amy Berman Jackson ruled twice this week against Stone getting any further Crowdstrike reports (once in an opinion denying Stone’s efforts to get unredacted Crowdstrike reports as moot since the government doesn’t have them, and once today in his pre-trial hearing when she deemed the remaining unredacted passages to pertain to ongoing Democratic cybersecurity protections and so unrelated to what Stone wants them for), Stone still has several redacted Crowdstrike reports from discovery.

Stone’s defense has focused entirely on discrediting the evidence that Trump partnered with a hostile country to get elected (which presumably is part of his effort to get a pardon). If he can support that effort by releasing currently private Crowdstrike reports he will do so.

Today’s pre-trial hearing — where ABJ also ruled that Stone won’t be able to question the underlying Russian investigation — may have mooted the effort to tie Ukrainian disinformation to Stone’s own disinformation effort. But the two efforts are linked efforts by Trump to deny his own role in “colluding” with Russia.