BREAKING! George Papadopoulos Says FBI Should Have Surveilled Him MORE Than They Did 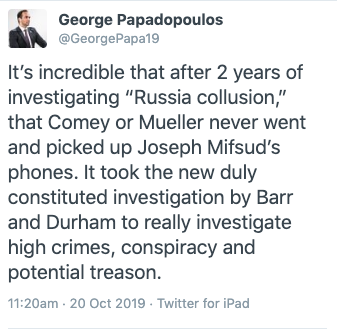 As I noted, on Tuesday, Mike Flynn’s Fox News lawyer demanded that Mike Flynn receive the contents of two phones reportedly used by Joseph Mifusd — one dating to May 2011 and another dating to December 2014 — so she can contest the guilty plea Flynn entered into regarding conversations and letters written in 2017 that did not involve Mifsud.

Now George Papadopoulos is getting into the act, complaining that “Comey or Mueller” never went to obtain these phones from Italy.

It’s a remarkable complaint, coming as it does from Papadopoulos. After bitching for over a year that the FBI surveilled him too much (all the while repeating hoaxes and ignoring the record that shows the opposite), notably that he was picked up in what were probably conversations with targeted Israelis, Papadopoulos is effectively arguing that the FBI didn’t surveil him enough.

That’s all the more remarkable given that the government is on the record stating that one reason they couldn’t do with Mifsud what they did with other foreigners who entered the US during the Russian investigation — seize their phones — is because Papadopoulos lied to the FBI.

Indeed, had the FBI been able to seize Mifsud’s phones while he was in the US during a period he was in contact with Papadopoulos, they would have a better chance of obtaining the phones Mifsud actually used to communicate with Papadopoulos, which it’s not at all clear are either of these dated phones. But because Papadopoulos lied, he prevented them from establishing the probable cause that would have permitted them to get the phones.

Another of the details the government revealed to substantiate that Papadopoulos did not cooperate in the investigation is that he hid the existence of the phone he actually used to communicate with Mifsud through three proffer sessions, on August 10, August 11, and September 19, 2017 before finally revealing it on September 20.

The defendant also did not notify the government about a cellular phone he used in London during the course of the campaign – that had on it substantial communications between the defendant and the Professor – until his fourth and final proffer session. This cell phone was not among the devices seized at the airport because it was already in the defendant’s family home in Chicago.

The detail that Papadopoulos withheld the phone he actually used with Mifsud suggests he really didn’t want the true nature of his communications with Mifsud to be revealed. It may also suggest that FBI had, by September 2017, done enough surveillance of Mifsud to know what was on whatever phones he had actually been using with Papadopoulos.

And Conspiracy George has not — as far as I’m aware — talked about the metadata showing Mifsud’s ties with someone who appeared to be at the nexus of the two Russian operations, metadata that the FBI considered an ongoing investigation in April, when the Mueller Report was redacted.

That is, there’s a decent chance the FBI obtained anything interesting from 2016 from these phones via other means, means that also remain protected.

Whatever the reason for Papadopoulos’ change in heart, I do hope he’ll inform Bill Barr that, on reconsideration, he actually thinks the FBI didn’t surveil him enough in 2017, so Barr can stop his global wild goose chase and return to DC and start doing the work of an Attorney General.