Yesterday, I wrote a long post showing that DOJ could not have followed their most basic investigative protocols when it got the whistleblower complaint in late August. Had they done so, one of the first steps would have been to see what material FBI already had on all the people named in the complaint. And because a profile of Lev Parnas and Igor Fruman was cited 4 times in the complaint (though their names did not appear in the complaint itself), the original assessment of the complaint should have discovered all the things DOJ already knew about their influence operation, which at that point would have included:

This table shows what DOJ probably learned by when. Once one part of DOJ got new information on the grifters, that information would have become available to anyone doing a search on their name in FBI databases. 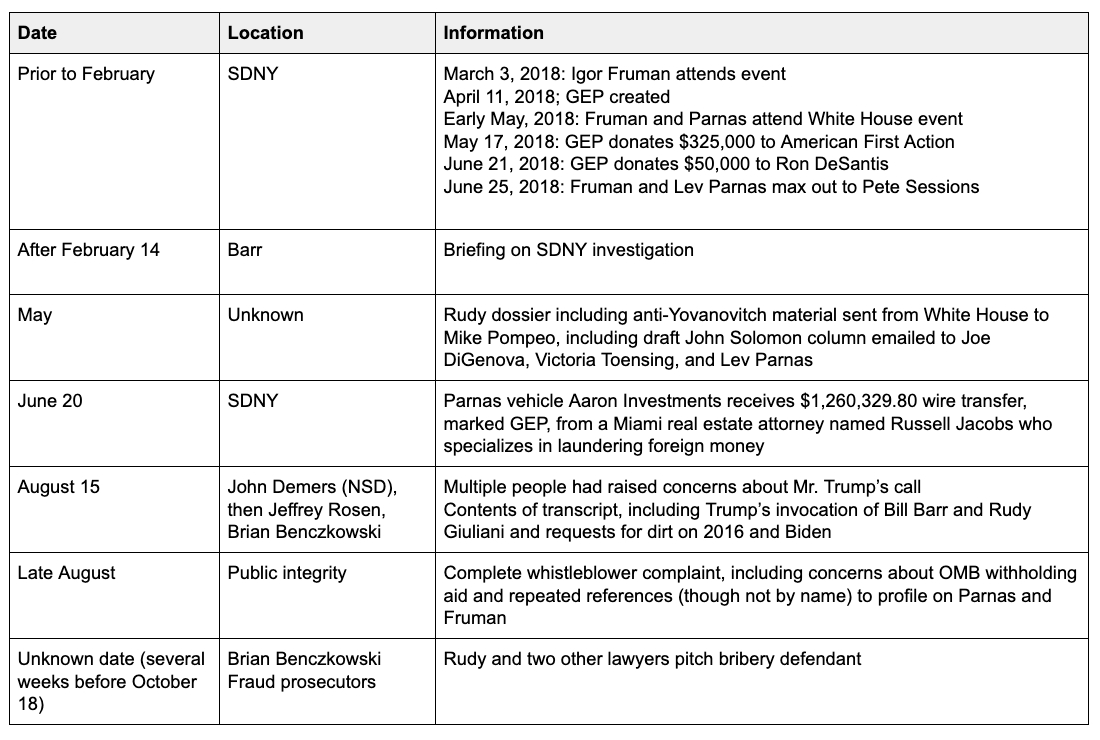 Thus, had DOJ done what it does in virtually all its other assessments of tips (particularly those that have a national security component), line investigators would have discovered that the July 25 call was obviously a part of the influence operation — including Parnas and Fruman, but also Rudy by that point — already under Full Investigation in SDNY.

DOJ explained how it managed to do so by claiming, falsely, that there was no firsthand knowledge reflected in the complaint itself, and so rather than using the complaint (which included that reference to Parnas and Fruman), they used the call transcript, which did not mention the Ukrainian grifters. Because it mentioned Rudy, queries on his name would still have made it clear that the call was part of an influence operation, though it’s possible and defensible that (as happened with the Trump Russian investigation, at least at first) DOJ did not do the same kind of back door searches they would do on everyone else because Rudy was a politically sensitive person.

But it turns out that’s not the only way DOJ affirmatively prevented people from connecting the dots in a national security issue.

Yesterday, MoJo reported on another way that DOJ prevented anyone from connecting the dots. Under a Memorandum of Understanding in place with the FEC, DOJ should have shared campaign finance related complaints with the FEC so they can assess whether the complaint merits civil penalties.

But under a 1978 memorandum of understanding between the department and the FEC—which, like Justice is authorized to penalize campaign finance violations—the complaint should have been passed onto the FEC even if the department declined to launch a criminal investigation, so the election watchdog can determine whether a civil penalty is called for.

Earlier this month, Klobuchar set out to uncover whether the Justice Department had honored this agreement, sending two letters to the FEC inquiring whether it had received any such referral. On October 18, the commission’s Democratic chair, Ellen Weintraub, confirmed to Klobuchar that the FEC had not been notified. “The refusal to inform the FEC and refer the matter regarding the President’s call to the FEC as required to do, as the Justice Department is required, undermines our campaign finance system and is unacceptable in a democracy,” Klobuchar said in Tuesday statement.

FEC, of course, already had the original and supplemental CLC complaint about Parnas and Fruman, so they might have connected the profile showing their work for Rudy, included in the whistleblower complaint, with the President’s demand that Volodymyr Zelensky cooperate with Rudy’s antics on the call.

Again: this kind of dot-connecting is what FBI and the rest of our investigative apparatus have been refocused on doing since 9/11, specifically to ensure that any threats to the United States will be identified as quickly as possible. But when such dot-connecting would have knowably implicated powerful Republicans, including the President, it magically didn’t happen in this case.

Unless DOJ can come up with a good explanation for why they failed to share the unclassified part of the complaint with FEC (I’m waiting for DOJ to say that once Matthew Petersen resigned on August 26, just as DOJ was assessing the complaint, the MOU lapsed), then the failure to do so constitutes a willful attempt to thwart FEC from doing its job, something Ellen Weintraub lays out clearly in her letter to Amy Klobuchar. As far as she knows, the MOU remains intact, and therefore DOJ was obliged to share the complaint.

The Commission has taken no action to change its position that the MOU is the primary guidance and procedural agreement used by the Commission to assist in collaboration and consultation efforts (including referrals) between the Commission and DOJ.

It turns out that deliberately undermining FEC’s ability to do its job is a crime, one of the same crimes that Parnas and Fruman got charged with, the same crime that Bill Barr’s DOJ is vigorously prosecuting against the Russian trolls (though which a recent decision from Dabney Friedrich may put at risk): Conspiracy to Defraud the US.

There’s zero chance, of course, that Bill Barr will charge his top aides with thwarting the ability of the FEC to connect the dots on a referral that directly ties to another complaint already in their hands. But we should be clear that DOJ appears to be engaged in undermining the proper functioning of the campaign finance system in the same way Russian trolls and Parnas and Fruman have been accused of doing.

We Can Learn A Lot From That Lev Parnas Photo With Ivana Trump GOP Republicans Stage Brooks Brothers Riot 2.0 to Emasculate Their Own Power...