Yesterday, I watched with fascination as Matt Gaetz whipped his stormtroopers into a frenzy and stormed the ramparts of the SCIF facility where Laura Cooper was scheduled to be deposed. This tweet by Scott Thuman especially caught my eye, with the video he provided:

WATCH: here’s the video of when 2 dozen GOP members, led by @mattgaetz entered the secure hearing room (SCIF) to interrupt witness testimony in the #ImpeachmentInquiry as they demand access, despite not being committee members. They’re complaining it’s a “Soviet-style process”. pic.twitter.com/8KddYz3r9D

What really stood out to me was that one of Gaetz’s stormtroopers had his cellphone out and appeared to have his camera active as he approached the door. Based on Thuman’s “entered the secure hearing room” and the way Thuman pointed his camera down as he panned to the door, I initially had the impression that this doorway the Congressmen were going through was the entry to the SCIF itself, and so I tweeted this:

Note that one of these clowns had his camera active while entering the SCIF. Was he livestreaming? If so, that facility is seriously compromised. Please help identify just which Gooper this is so we can report him to the @FBI for his violation of the law. pic.twitter.com/goPOFy0Xl9

I had no idea that this would become my most viral tweet ever. At the time of this writing, the tweet has just under 95,000 impressions.

I did not yet know who this was with the phone. It has since become clear that it was Representative Alex Mooney of West Virginia. He even put up a tweet with an audio recording from inside the SCIF that he claimed came from a “secure phone”.

Needless to say, I had lots of pushback and I got to see the amazing array of bots and MAGAts that swarm whenever their world view is threatened. One theme that kept coming up, though, was that this was not the SCIF itself. It turns out that is somewhat true. After 6 pm, Mooney put up this tweet, which clearly has the video he was recording as Thuman captured him going through the door:

Here is the video of me before entering the SCIF hearing room to expose Adam Schiff and the Democrats secret impeachment hearing to demand transparency for West Virginians and the American people. pic.twitter.com/DGEJZHehbz

Okay, this confirmed what I was beginning to suspect, that the doorway in Thuman’s video is not the entrance to the actual SCIF. When a person at the entrance to the SCIF announces that cameras are not allowed, his first response is “What camera?”. But upon being informed again, Mooney shrugs and turns off the phone, presumably to surrender it .Note that multiple media reports make it clear though, that not all of Gaetz’s stormtroopers surrendered their devices, causing quite a serious security breach.

But Thuman’s reluctance to capture video from inside the door (we see only a red carpet and a few feet) and his failure to follow Gaetz’s stormtroopers made me wonder if the doorway was still in some way restricted. In fact, given the extreme security measures taken for a SCIF, it seemed reasonable to wonder if there was signage restricting electronics even beyond this point, so that detailed information of the building layout leading to the SCIF entrance would not be disseminated.

So I began searching Google images for pictures of Gaetz’s stormtroopers going through the door. I hit paydirt in what turns out to be an entire New York Times article on the event. This is the banner on the front of a video the Times did: 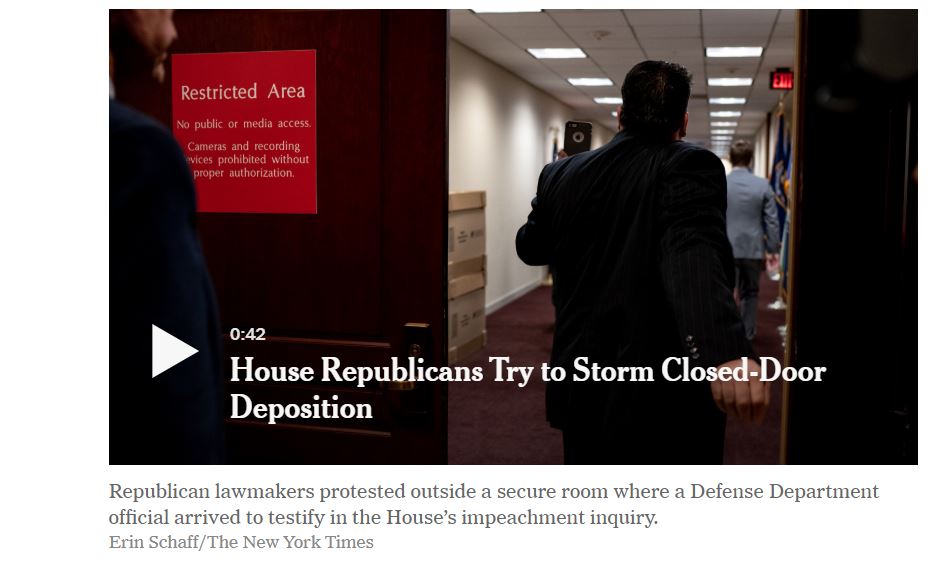 This is clearly a photo taken as stormtrooper Mooney goes through the door with cell phone blazing. Ah, but look at the sign on the other half of the double door: “Restricted Area No public or media access. Cameras and recording devices prohibited without proper authorization.”

Oh my, so when stormtrooper Mooney barged through the first door, he failed to read the sign informing him that he was not to be filming his own heroic action.

As if the Times photo alone is not enough to disgrace Mooney, he had to pile on. Here is a tweet an exhausted stormtrooper Mooney put up just after 7:30, after his siege of the SCIF had ended (never mind that the deposition itself actually took place anyhow, but with a five hour delay):

I will continue to stand with President @realDonaldTrump and expose this sham impeachment process. pic.twitter.com/mVxIlYOrY2

Mooney actually came back out the door and had a staffer film him while explaining that “this is not the SCIF” and, once they entered, “nobody was using a cell phone”. The problem is that he’s using as a backdrop for this explanation the sign showing that electronics were not to be used even going through this outer door, and his entry through that door, with his cell phone going, has been documented by Scott Thuman, Alex Mooney, the New York Times and hopefully, law enforcement: 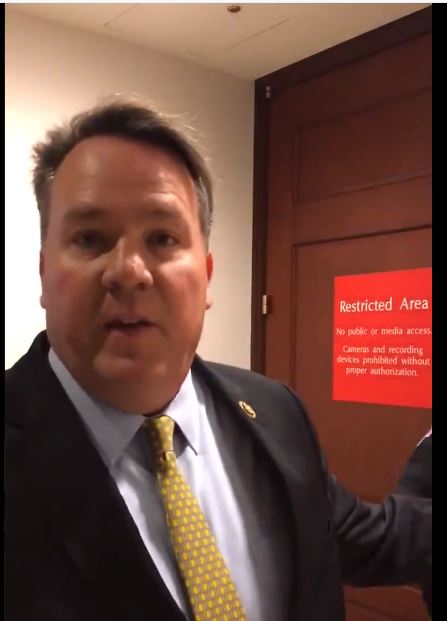