On the Classification Disputes over Mike Flynn’s Discovery

Over the last week, I have laid out how Mike Flynn’s TV lawyer, Sidney Powell, used what was nominally a reply brief in her Brady demand to make a new request that the entire prosecution against Flynn be thrown out. I showed how her argument misrepresented the evidence she used to make it — at one point, she even accused her own client of lying in his initial FBI interview! Nevertheless, Powell succeeded at least far enough to get Sullivan to order the government to respond to her entirely new demand, a sign he may be sympathetic to her gaslighting.

But I’d like to go back and consider the declassification process that got us to this point.

Flynn’s reply was due on October 22, a week ago Tuesday. Starting on Saturday, October 19, Flynn’s team tried to get DOJ to approve its use of the materials it had received under the protective order — 302s involving Peter Strzok and Lisa Page, Strzok and Joe Pientka’s notes from the initial interview, some of the Strzok-Page texts, and a redline of the 302 from February 10.  That exchange looked like this:

October 19, 3:54PM: Powell writes AUSA Jocelyn Ballantine cc’ing other lawyers, stating she plans to include quotes from the protected materials, including from “the various 302s of the 24th, [redacted], [Page’s] 302, and the agents [sic] notes,” stating they may file without sealing the reply or exhibits.

October 20, 1:36PM: Brandon Van Grack response, stating they need to ask “equity holders, in particular the FBI,” and offering to start reviewing quotes before the reply is finished.

October 20, 1:49PM Flynn attorney Molly McCann replies and asks Van Grack to “begin the process to clear the full documents,” including the 302s, the documents whose description is redacted, [Page]’s 302, and the agents’ notes.”

October 22, 12:45PM: Molly McCann writes Van Grack and others, attaching “our proposed redactions,” based off “the redactions [the government] made in the original Motion to Compel. McCann stated that, “until you can complete your review process we would expect to keep the exhibits under seal.”

October 22, 3:34: Van Grack replies, stating that “we have circulated the motion, and your proposed edits, to the appropriate entities,” noting that “we will need to request redactions beyond what you propose.”

October 23, 10:33AM: Powell writes Van Grack, advising him that “if we have not received your proposed redactions as to the Reply brief by 1 p.m. today, we will be filing a motion with the court.”

October 23, 10:39AM: Ballantine writes Powell, stating that “there is information in your filing beyond that which you flagged for us on Sunday,” adding, “there is one sensitive matter that is unlikely to be resolved before the end of the day.”

October 23, 11:10AM: Powell responded, “without a proposed redacted version from you that can be unsealed today or an assurance it will be resolved today, we will be seeking relief from the court by 5 p.m.

October 24, 10:23PM: Flynn’s team submits motion for leave to file, along with their “reply,” based on adopting the government’s redactions.

Effectively, Powell got fed up waiting for FBI to decide what could and could not show up in her reply, and pushed to publish a public copy. Sure, she was insistent on filing as much of this in unredacted form as she could so she could feed the frothy right with her brief (which she effectively admits in her October 23 filing). But that is entirely her right. I’m totally sympathetic with her demand that she be allowed to file this in timely fashion (though I imagine the government would suggest they should have started the declassification process more than three days in advance).

This is one issue I’m absolutely supportive of Powell’s aggressiveness.

But, particularly given the timing, I’m interested in the substance of the dispute. I’m interested for several reasons. Powell’s entire representation of Flynn went through Bill Barr. She clearly has gotten information about the Durham investigation stovepiped to her, most recently in the form of totally irrelevant (to Flynn) information about the government obtaining Joseph Mifsud’s phones. And she made claims about what she believed she knew should and should not be redacted.

Just as interesting, on the morning of October 23, Jocelyn Ballentine said one “sensitive matter” was unlikely to get resolved that day. On October 24, the NYT and other outlets first started reporting that Durham’s inquiry had become a criminal investigation. Certainly, there could be other issues that might be that sensitive issue (including decisions about indicting Andrew McCabe). But the redactions on some of these exhibits certainly might be implicated by a Durham investigation, depending on the scope of it.

Let’s work backwards. First, of the 16 exhibits submitted with her reply, just eight came from the government and so were subject to the protective order (this post has more extensive discussions of what these are):

9) Joe Pientka notes from the interview

10) Strzok notes of the interview

In the exhibit showing the conversation about declassification, the existence of the Sara Carter-related 302 and the Page 302 were redacted entirely. All the exhibits were cleared for release in some fashion, though I’ll get back to what remains redacted.

In Powell’s filing asking Sullivan to intervene, she said, “The only exhibits to the Reply for which the defense knows of any reason to remain under seal are 5, 6, 9, 10, 11, and 12.” In her motion to file the reply brief, she said, “The government … proposed redactions to five of the exhibits Mr. Flynn included in his filing—Exhibits 2, 5, 6, 11, and 12,” meaning the texts included stuff she didn’t know should still be redacted. I’ve marked the exhibits the government added redactions to above.

The redactions of the redline must be — in addition to names — redactions of information that would reveal how FBI works. Among other things, it likely includes codes the agents use to track them, because DOJ screwed up who made the two changes to the redline (as I note here, they say Strzok didn’t remember something that Pientka added, but it must be the reverse given their notes).

Similarly, the only thing redacted in the Page 302 is names and organizational stuff. That would suggest that nothing in the Page 302 implicates ongoing investigations (including, but not limited to, Durham).

It’s hard to tell what got redacted in the texts. Clearly, something that the government released to Flynn was deemed too sensitive to release. But there were already two sets of redactions in the texts — the gray ones (possibly for privacy reasons) and some black ones that redact genuinely sensitive material. One of those things, for example, is the name of the person Strzok and Page were worried about locking in on May 10, 2017, which Flynn (and the rest of the frothy right) believed incorrectly to be him. But there are other things — such as a October 19, 2016 and another January 23, 2017 text — that might have been released to Flynn but cannot be released publicly. Or, it’s possible FBI just redacted the phone numbers.

Most intriguing is the Sara Carter related 302. There are two redactions, one introductory and one referring to the third allegation Carter was chasing, that after Flynn resigned, people high fived and said, “we got him.” Powell apparently knows why it was redacted. But I had heard, in reporting something else, that this was considered a hoax targeted at McCabe. If the redaction reflected badly on McCabe, Powell would be sure to include it in her filing, which she doesn’t. One possible explanation is that DOJ is still trying to chase down where this disinformation got spread (consistent with the fact that DOJ IG still hasn’t released its report on who was behind the NY Field Office leaks, in part because there were too many to pinpoint).

Finally, there’s the 302 memorializing Strzok’s role in the initiation of the investigation. It has the same redactions (and appears to be the same version) of the 302 released in June, in the wake of the Mueller Report. At the time, the government said those were deliberative privilege and personal privacy redactions — meaning most of what remains redacted consists of discussions of investigative choices.

Except that last point — about the 302 memorializing Strzok’s role in initiating the investigation — might have changed.

Note that the government told Flynn’s team there were things in their actual brief that needed redaction. Aside from names, two things are redacted. First, a footnote modifying Powell’s otherwise unsubstantiated claim that the FBI knew they had no basis to investigate Flynn, which cites to the 302 on Strzok’s role in opening the investigation. 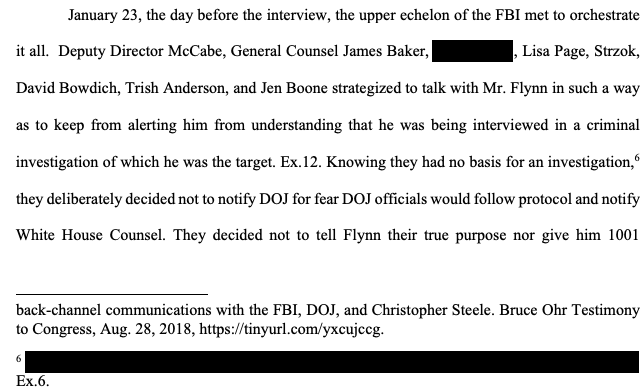 This must be something genuinely investigative, or Powell would have contested it on releasing the motion. Remember that at the time, Flynn was under investigation for being an Agent of Russia. Perhaps significantly, in the government’s Surreply, they get really vague when addressing the multiple bases for interviewing Flynn.

The defendant also now argues that the information he seeks will prove that the “FBI had no factual or legal basis for a criminal investigation.” Reply at 14-16. In support, the defendant cites to the standard necessary to obtain a warrant pursuant to the Foreign Intelligence Surveillance Act (”FISA”). See Reply at 14, n.11. Obtaining a FISA warrant, however, is entirely different from the FBI interviewing an individual as part of an ongoing counterintelligence investigation. Here, there were multiple bases for the FBI to interview the defendant. The defendant’s false statements publicly attributed to him by White House officials about his communications with Russia were alone a sufficient and appropriate basis for conducting the investigative step of interviewing the defendant.

Don’t get me wrong, they’re right that Powell is speciously arguing that the government needs probable cause showing someone is an Agent of a Foreign Power (the FISA standard) before they interview someone — it’s a point I made in bullet 9 here. But the Flynn camp has always tried to limit the reasons why the FBI interviewed Flynn (not least so they could claim it was an improper investigation into policy). There’s likely a whole lot of baggage to these redactions.

A more interesting redaction comes in a passage that invents out of thin air a claim that Chuck Grassley had seen files regarding briefings Flynn did before he went to Russia and deemed them exculpatory. In it, the government redacted a sentence about those briefings. 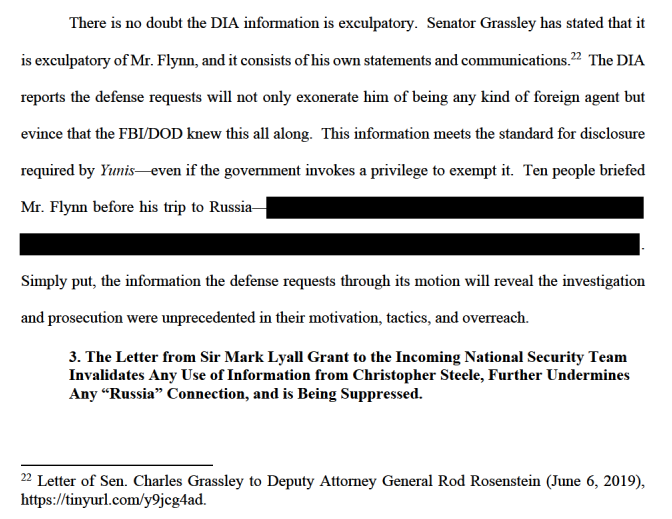 Probably, this stuff comes from DIA material shared with Flynn in August (after it was handed to Grassley). The government, in its response to Powell’s initial motion, said some of what Flynn told the DIA was inculpatory.

Which makes it interesting, first, that Powell isn’t trying to represent the content of these supposedly inculpatory DIA files, and second, that DOJ continues to hide it.

There seem to be two tensions going on behind all this discovery. First, the possible referral of people involved in his prosecution (but apparently not Lisa Page) to Durham. But just as interesting, given ongoing redactions regarding Flynn’s ties to Russia, inculpatory information about his own ties to Russia.