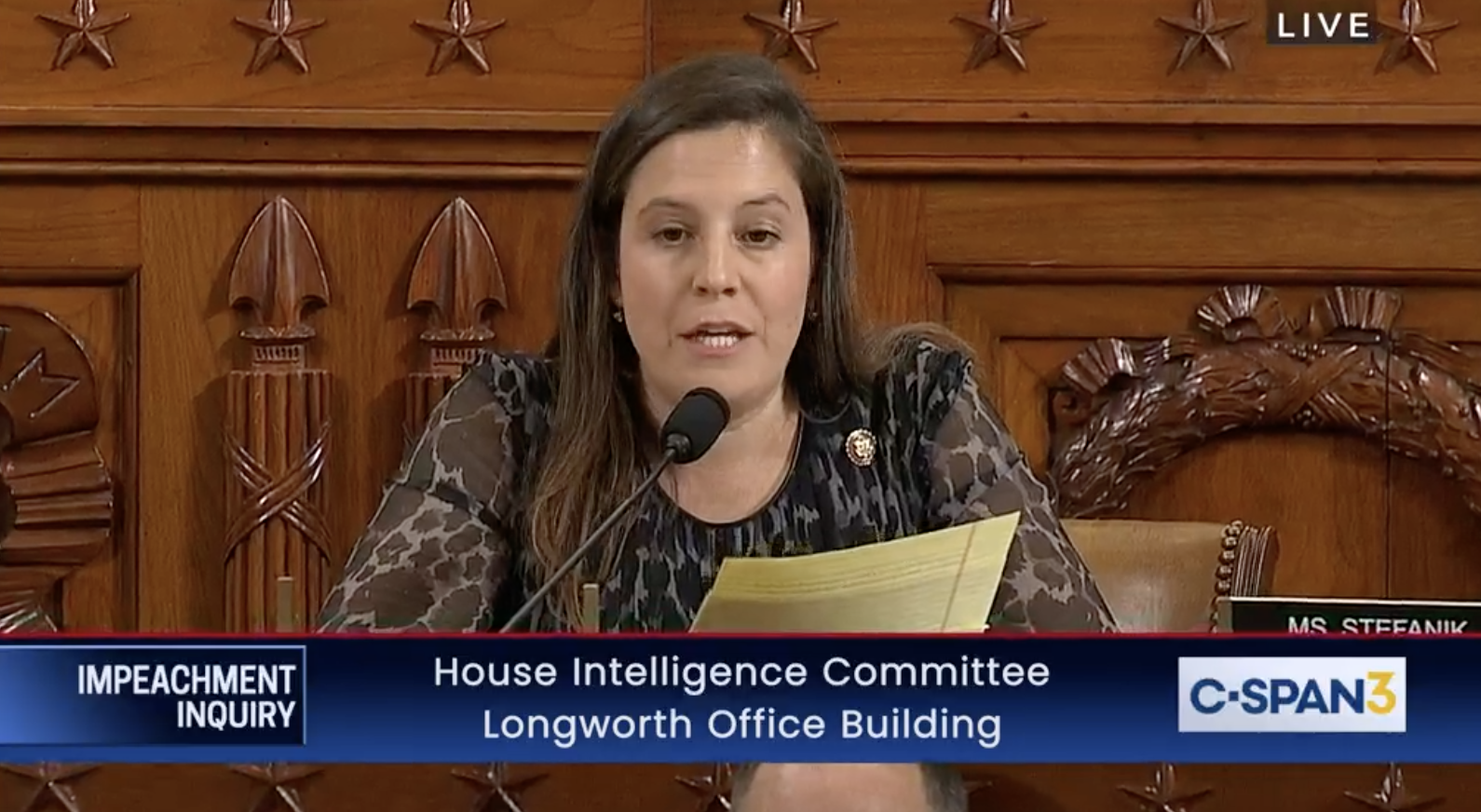 The first of today’s two impeachment hearings just finished up. While Adam Schiff and Dan Goldman remained sharp, Steve Castor remained lackadaisical, and Devin Nunes and Jim Jordan remained disgusting, much of the rest of the committee, on both sides, seemed less engaged than in last week’s hearings. Bizarrely, Republicans spent much of the hearing asking witnesses Alexander Vindman and Jennifer Williams — both of whom were direct witnesses to the call to which Republicans want to limit the impeachment inquiry — to provide hearsay testimony about Burisma and Hunter Biden.

The highlight of the hearing came when Vindman, who had been smeared with questionable loyalties leading up and during the hearing, explained that he told his father not to worry about him testifying because, “This is the country I’ve served and defended. That all of my brothers have served. And here, right matters.”

Because of her stunt in last Friday’s hearing, I’m interested in what Elise Stefanik did.

First, she got demoted. Her male colleagues treated her like the junior committee member she is, rather than giving her top billing. That, by itself, made it clear she was used last week as a token.

When it finally came around to her turn three and a half hours into the hearing, she then focused on talking points she has adopted — that under Trump (in part forced by Congress) Ukraine has gotten assistance and continued to work on corruption, no investigation into Joe Biden got started, and the aid ultimately got released.

But as part of that, she walked Vindman through an attack on Burisma, first misquoting him saying that in Ukraine, generally, tax evasion and money laundering are a problem, to apply that to Burisma. She then said,

I know that my constituents in NY-21 have many concerns about the fact that Hunter Biden, the son of the Vice President, sat on the board of a corrupt company like Burisma.

It’s a wonderful sentiment, really, that Congress should dictate what the family members of top officials should do to make money.

But since she has expressed this concern, I assume she feels the same about two other children who occupy top positions in a company with a documented history of facilitating money laundering and credible allegations of tax evasion, particularly given that her own state, New York State, found that these children, Don Jr and Eric Trump, as well as their sister, must be barred from running any charities in the state.

Since Elise Stefanik has stated, in front of the nation, that the children of top government officials must not have leadership positions in corrupt companies with money laundering and tax evasion problems, surely she’ll call for the President’s sons to step down from the family business?

Impeachment Hearings: Day 3 – Witnesses to the July 25 Call [UPDATE-2... Kurt Volker Makes the Case that Ukraine Tampered in 2016 Election — for...