Posts in this series. This post is updated from time to time with additional resources.

I have updated the Index linked above with a brief description of the end of Chapter 2 and the remaining four chapters of Elizabeth Anderson’s Private Government. As I note there, two of the comments are disappointing: the commenters largely ignore Anderson’s views of freedom and equality as they relate to the workplace, choosing to argue that workers don’t really care about these issues, or are satisfied with the current arrangement or that corporations don’t actually trammel on workers. This seems remarkably short-sighted in light of recent resurgence of worker actions, such as the GM strike and the Chicago Teachers Strike. In the GM case, the union won the end of the two-track wage system. The Chicago Teachers strike was notable in the solidarity among the teachers and the other employees of the school system, and the parents and the kids (shout-out to my daughter’s family!).

Anderson’s definitions of freedom and equality give us a completely different way to analyze our society. Disparities in both have created the material inequality that is wrecking our society. I begin by looking at these disparities in practice. Recall that in Anderson’s terms freedom can mean negative freedom, positive freedom or freedom from domination.* Inequality refers to differences in social relationships: differences in standing, authority and esteem. I don’t know how to quantify these categories, so let’s look at them again and ask where different people stand. In each case, as a general matter, minorities have less freedom and less equality in each of the six categories, in some cases, substantially less.

1. Negative Freedom, or freedom from interference. This refers to the ability of a person to use the force of law to protect their actions or their property. This is the only freedom economists, especially neoliberal economists, consider relevant to their practice. It’s clear that rich people have the most negative freedom. They have lots of property, and the right to bar others from using it. Their wealth gives them a very broad scope of actions, for example travel, general consumption, and political action. As we go down the wealth scale, property and the range of possible actions drops. Among the lowest income groups, there is little property, and thus little negative freedom, and the scope of actions is much more limited, especially because they are easily excluded from all except public property.

Wealthy people enjoy negative freedom created for their benefit. They can join exclusive clubs that keep the rest of us out so they can play at golf, shoot skeet, eat among their wealth peers, and gamble. They go to exclusive parties, where private security guards keep the rest of us away. They have their own airport terminals at our public airports for their private jets and helicopters. That too declines as we move down the wealth scale.

Of course, we all have some negative freedoms. For example, we can all own guns, and in many places carry them with us. No one can stop us from using those guns to “stand out ground” in some states. That means that for some people the consequence of negative freedom is death or injury by gun, interfering with their right to life, liberty and the pursuit of happiness.

2. Positive Freedom, or range of opportunities. There is almost no limit to the opportunities available to the rich. As we move down the wealth incline, opportunities gradually decline. Consider the different educations the rich have had, compared to the educations of the less well off, and working class and poor people. Think about the jobs available to those who can stumble out of elite private schools with degrees, compared to those with good grades at state universities. Then think about the working class kids trying to get decent training at for-profit trade schools, which load them up with student debt.

One way to measure positive freedom is social mobility. Here’s a comprehensive study by Raj Chetty and his colleagues of social mobility in the US. Here’s one of the charts in that study, showing relative social mobility estimating the probability that a child born to parents in the lowest quintile of income will attain an income in the top quintile compared to such chances in other countries.** 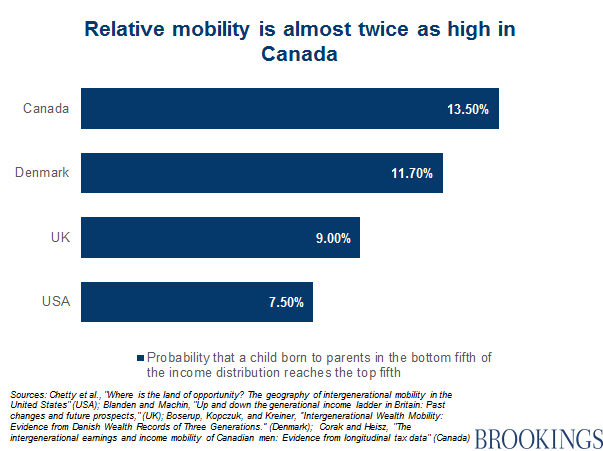 Here’s another chart from Chetty, showing the likelihood that a child will exceed the income of her parents. This chart is especially depressing, because we used to think that this was proof of the excellence of the US economy. 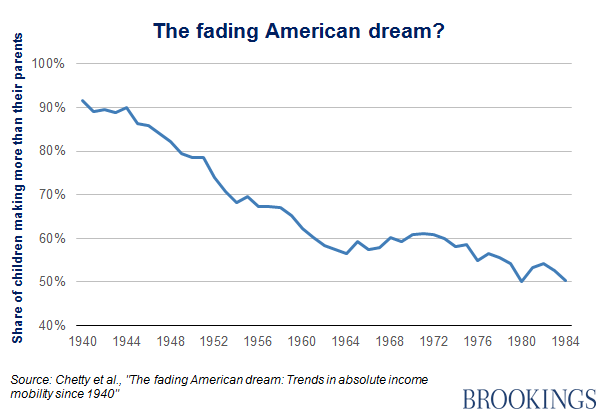 Note that the y-axis on this chart is shortened by dropping out the bottom 40%.

The most widely used measure of intergenerational economic mobility is intergenerational income elasticity (IGE), a coefficient obtained via a regression model that captures the statistical connection between parents’ income and their children’s income in later life.

They apply it across the income distribution, trying to estimate the effect of parental income on their children’s incomes. Here’s how they describe their results:

We estimate an IGE value for the pooled sample of 0.47 at the mean of the income distribution, which is in line with the literature. More importantly, we observe a U-shaped pattern in the parental income inﬂuence on children’s income. Thus, IGE is highest at the lower quantiles of the distribution (0.6 at the 5th to 20th percentiles), falls to a minimum of around 0.38 at the 70th percentile, and then increases again up to almost 0.5 at the 90th to 95th percentiles.

Loosely, this means that most kids whose parents are in the top and bottom quintiles of income are likely to remain in those quintiles, while more kids in the middle three quintiles may move up or down.*** If this is right, poorer kids have the least positive freedom, and middle class kids have more, but have a good chance of falling in social mobility, and rich kids have the most positive freedom, and are protected from failure.

3. Freedom From Domination. The more money one has, the more free one is from domination by others. At the top of the wealth scale people are generally free from domination, and through their influence in the political system, they avoid much restrictive legislation and benefit from favorable legislation.**** Wealthy people often escape accountability for actions that would incarcerate others, or result in civil damages. For example, after the Great Crash for an obvious example: not only did Wall Streeters avoid criminal exposure for causing the Great Crash, they got to keep almost all of the money.

As Anderson documents in her book, average working people don’t have that kind of freedom from domination in the work place; although employers vary in their use or abuse of that power. In other aspects of their private lives, they are able to avoid domination if they are white. That’s less true of people of color, who are easily singled out for hassling by law enforcement, security personnel in private spaces, and others with local authority.

Wealthy people have the ability to dominate many others simply by virtue of their wealth. Among the great middle, there are some opportunities for domination, both in the workplace and to a lesser extent in other private groups, The poorer one is, the fewer opportunities there are to dominate others.*****

I’ll take up social hierarchies in the next post.
=======
* These terms are discussed in earlier posts in this series. See the Index at the top of this post.

** In 2017, the top of the lowest quintile was $24,000, and the bottom of the top quintile was $127,000. Note the use of income as a proxy for social mobility. Education is often studied as a proxy, with similar and expected results. Education may measure an important aspect of human flourishing not captured by income studies.

*** This material is complicated, largely because of the use of statistical techniques I’m not familiar with, and I am wary of it because it so closely matches what I would expect, creating a risk of confirmation bias.

**** Here’s a discussion of the Gilens and Page study of the legislative preferences of the rich.

***** I exclude families, where men can get away with domination.