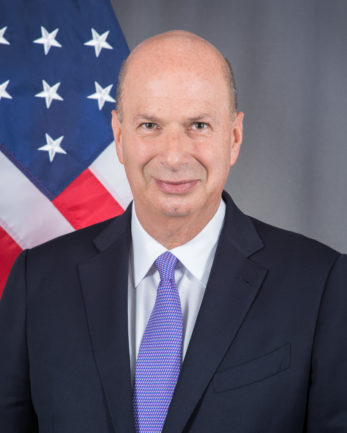 The WaPo today clarified that the meeting Criminal Division head Brian Benczkowski took with suspected foreign agent Rudy Giuliani after SDNY started to focus on his influence peddling was not, as I and other suspected, to pitch Dmitry Firtash’s case. But it did have a tie to Rudy’s Ukraine influence peddling.

Rudy was pitching the case of Venezuelan energy executive Alejandro Betancourt López, who is an unindicted co-conspirator in a different money-laundering case.

Giuliani was one of several lawyers representing Betancourt in Washington. The lawyers met with the chief of the Justice Department’s criminal division and other government attorneys to argue that the wealthy Venezuelan should not face criminal charges as part of a $1.2 billion money-laundering case filed in Florida last year, said the people, who, like others in this report, spoke on the condition of anonymity because of the ongoing investigation.

The criminal complaint alleges that top officials of the Venezuelan state-owned oil company, elite business leaders and bankers conspired to steal money from the company and then launder it through Miami real estate purchases and other investment schemes.

Betancourt is not one of the eight men charged in the case, a group that includes his cousin. But a person familiar with the matter said that he is referred to in the criminal complaint as a uncharged co-conspirator, as previously reported by the Miami Herald.

And when Rudy and Lev Parnas were in Madrid in early August to coach Yermak on what Volodymyr Zelensky had to do to get Trump to deliver on his promises, Betancourt hosted them.

When Rudolph W. Giuliani went to Madrid in August to confer with a top aide to the Ukrainian president and press for political investigations sought by President Trump, he also met with a previously unidentified client with very different interests.

While in Spain, Giuliani stayed at a historic estate belonging to Venezuelan energy executive Alejandro Betancourt López, who had hired Trump’s personal attorney to help him contend with an investigation by the Justice Department into alleged money laundering and bribery, according to people familiar with the situation.

During the trip, Giuliani met with Yermak at a hotel in Madrid, according to people familiar with the trip.

But he — along with Parnas and Fruman — stayed at an expansive estate belonging to Betancourt on the grounds of an ancient castle once used by Spanish royalty, the people said.

Effectively, then, Rudy’s ability to get Benczkowski to take his meeting subsidized Trump’s effort to coerce political benefits out of Ukraine.

As I have noted, Beczkowski’s claims of ignorance of investigations into Rudy might be true, but one way or another, they make it clear DOJ really went out of its way not to investigate the whistleblower complaint involving Rudy, Parnas, and Fruman, because if they had they would have known Rudy was under criminal investigation at the time of the meeting.

This story — in which one corrupt oligarch pays for Rudy to get other corrupt oligarchs to invent dirt on Trump’s enemies — makes the name some have adopted for this scandal — Moron-Contra — even more evocative, as Iran-Contra depended on slushing cash around various countries around the world.

The WaPo’s story notes the comparison to Iran-Contra may go still further. Fiona Hill expressed concern about what the Ukrainian grifters were doing in Venezuela.

In a closed-door deposition given to congressional investigators on Oct. 14, former National Security Council official Fiona Hill alluded to the possibility of a Venezuela tie to the ongoing Ukraine saga.

“I was told that by the directors working on the Western Hemisphere. I didn’t have a chance to look into this in any way. I was told that the same individuals who had been indicted had been interested at different points in energy investments in Venezuela and that this was quite well-known,” she said, referring to Parnas and Fruman, according to a transcript later released.

She did not detail the information she had been given, only that she had learned the two were “notorious in Florida” and involved with “strange things in Venezuela.”

“Well, I was extremely concerned that whatever it was that Mr. Giuliani was doing might not be legal, especially after, you know, people had raised with me these two gentlemen, Parnas and Fruman,” she said.

But there’s still another connection. As I noted when Gordon Sondland released his first of thus far three statements to Congress, he explicitly said that his mandate as Ambassador to the EU extended to (!!!) Georgia, Iran, and Venezuela.

My involvement in issues concerning Ukraine, while a small part of my overall portfolio, was nevertheless central to my ambassadorial responsibilities. In this sense, Ukraine is similar to other non-EU countries, such as Venezuela, Iran, and Georgia, with respect to which my Mission and I coordinate closely with our EU partners to promote policies that reflect our common values and interests.

So the way in which Betancourt ties Venezuela to Moron-Contra should raise further questions about why the Ambassador to the EU has any business in Venezuela.

The Government Prepares to Argue that Transmitting Information *To* WikiLeaks... Is It Russian Or Is It Real?