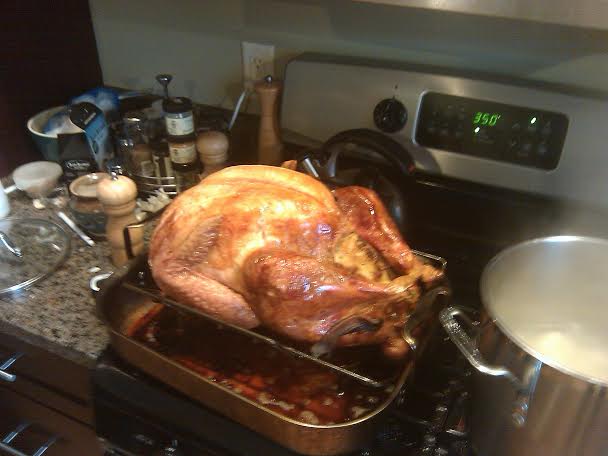 As longtime readers know, I like to focus my Thanksgiving gratitude on the Michigan farmers who provide the remarkable diversity of crops Mr. EW and I eat year round. Aside from olive oil and spices, you can source almost your entire Thanksgiving dinner from local Michigan farmers and I try to be intentional about who provides this meal. Among the providers who helped bring us dinner tonight, we thank:

Mr. EW and I have a special relationship with our meat farmers, Crane Dance Farm, two women who raise cows, pigs, lamb, chickens, and turkeys using humane principles. We’ve been buying our meat from them for years and gotten to be friends over that time.

Along with our meat, I get a sense of how the changing climate affects those farming the land from Jill and Mary.

This year, the cranes after which Jill named the farm, for example, came late, 20 days after the day they have arrived for decades. During that period Jill raised the missing birds every Saturday with a worried voice. They finally returned to the farm.

Then in the fall, the pork stopped, the delayed result of a significant drop-off in births much earlier in the year. Jill and Mary finally fattened enough pigs to slaughter just weeks before Thanksgiving (thankfully, given that my family tradition is cooking out turkey topped with bacon).

It’s not certain either of these things are due to the changing weather, though that’s a likely explanation. Meanwhile, Philadelphia had to pull the balloons from the Mummers parade on account of the high wind that, just days ago, ravaged the disappearing beaches here in Michigan.

I’m grateful for Michigan’s bounty. Unless we start doing something about the climate emergency, it may not be there very long.

Turkey Bowl Trash Talk The Origin of the Sharpie Quid Pro Quo Denial: An Effort to Craft a Cover Story...