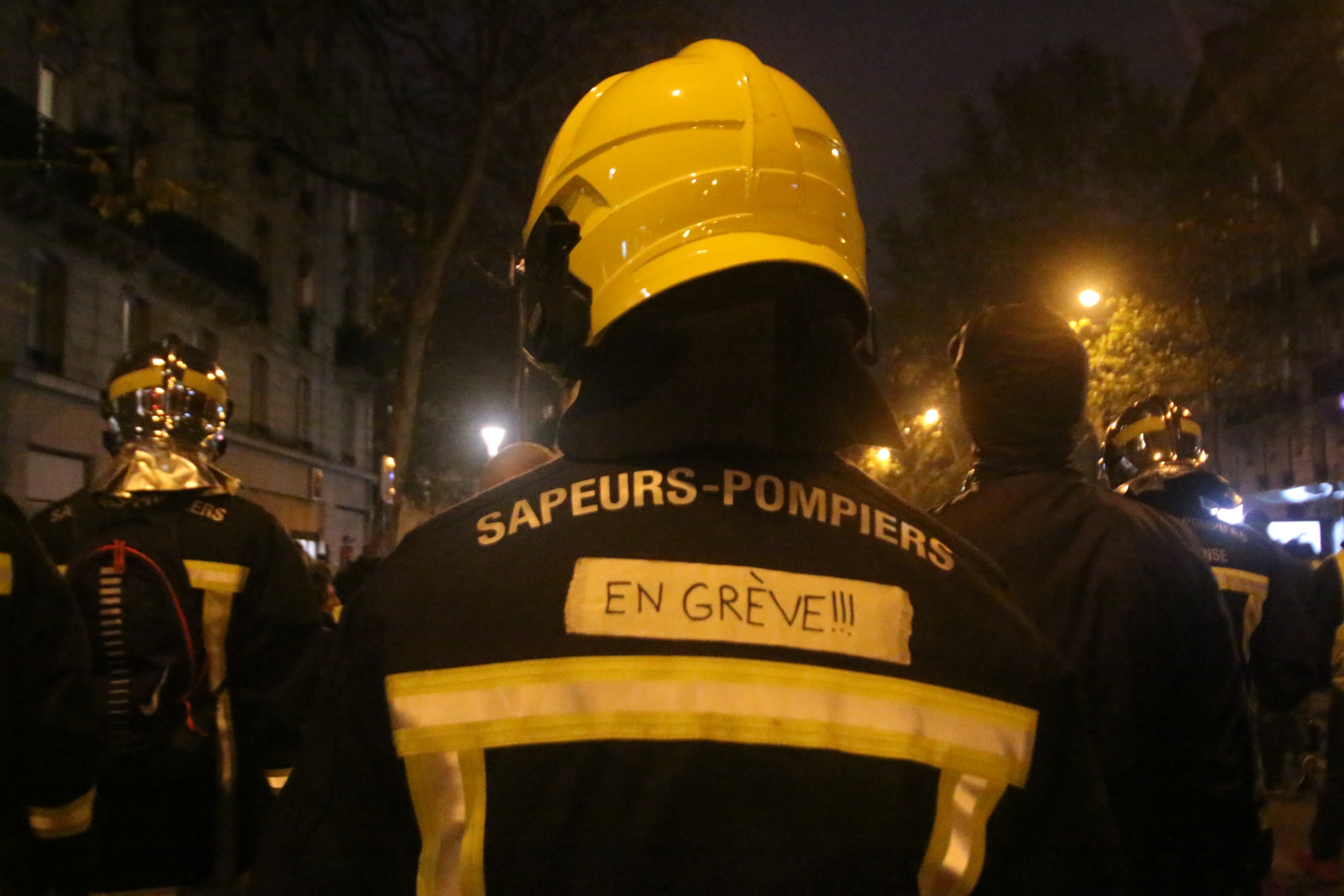 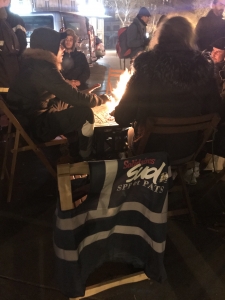 Visitors gather around the fire at the Pompiers protest camp in La République, Wednesday, December 4th. 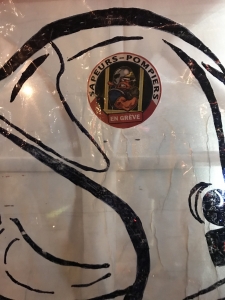 On the side of one of their three tents, French Firefighters have a special badge reading Sapeurs-Pompier En Grève, “Firefighters On Strike” in English

Few protest camps were as unusual as the one on Place de la République this week. On Wednesday night the Sapeurs-Pompiers (French for Firefighters) gathered around a fire in front of their tents on the old and famous la République, where they had set up on Monday. Around 15-20 were sleeping on site, and a changing cast of twenty or so more visitors, including me and my translator, were stopping by to chat with them.

They are camping until Friday, and like many of their colleagues, they were getting ready for the general strike and protest that happened today in cities all around France. They were dressed in their firefighting gear, good enough protection against the biting cold of the Parisian winter. The pompiers were all smiles, brewing fresh coffee and chatting with passersby. Two were even happy to try out their English with an American, before giving up and just talking to my translator. “It’s about the cost, the money,” Claire, a pompier from Nice, said to me, before reverting to French. In translation, Claire and another companion who didn’t give her name continued: the Pompiers pay more into their pensions because their job is high risk, and because they have to retire earlier than most other professions due to the harshness of the job on their bodies. But Macron’s plan to reform the pension system threatened them, potentially with less benefits or a later retirement age, and they wouldn’t have it. Pompiers all over France wouldn’t have it, along with train workers, nurses, doctors, teachers, and so on. 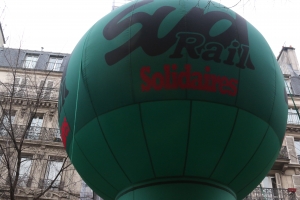 SUD Union Balloon brought by SNCF rail workers at the beginning of the protest.

The trains aren’t running, nor is the Paris Metro, hospitals are on skeleton crews, the firefighters were on the streets of Paris instead of in their firehouses, with what felt like everyone else in the world also on the streets of Paris, if you were trying to get through the crowd. One of the biggest strikes in recent French history was accompanied by one of the largest protests since a similar effort to reform pensions in 1995. The presence of the firefighters in the crowd was electric. They were the heroes of the day, people sang to them, the police mostly avoided tangling with them. At one point, when a group stopped to wait for other pompiers to catch up, a nearby group of perimeter police quickly put on their riot helmets. 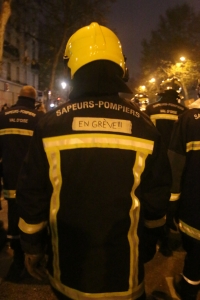 The crowd was estimated between 800,000 (Traditional police lowballing) and 1.5 million (Traditional organizer highballing). Let’s say 1.1 million, because the journalist normally just picks a number between them, and the fact is no one ever actually knows how many people are protesting. The germane answer is: a lot. Life in France was largely put on hold, as the unions engaged in France’s true national sport. 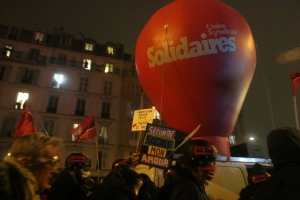 French unions consist of five major confederations of trade unions that represent most union workers and negotiate directly with the government, as wells as other smaller unions that represent a wide range of mostly public sector workers, as well as political positions from centrists to anarcho-syndicalists. But the unions only represent about 11% of France’s workers as of 2013, down from about 30% in the 1950s. Everyone else grumbles these union workers have it much better than the rest of France, and that they strike and complain too much.

This position seems to be stated by many of the non-unionized French workforce without a hint of irony or self-reflection. France is a country where the few protect the rights and social safety net of the greater number, while pissing off absolutely everyone. 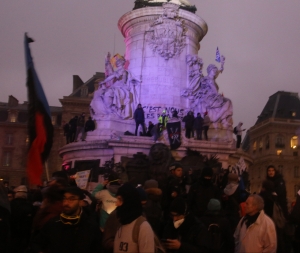 What has prompted them this time is the deeply unpopular President Macron’s amorphous and secretive plan to reform and combine French pension programs to streamline them and save money as they start to head into the red in the coming years. Macron’s administration has tried to say soothing things about their plan, and involve the unions in the process, but no one in France trusts Macron’s administration as far as they could throw the Élysée Palace. He consistently polls less popular with the French than Trump is with Americans, and that’s not easy to do. He also tends to act like he’s a petulant little king of France, an attitude that’s given rise to a lot of protests, walk outs, and political quagmires, of which the leaderless Gilets Jaunes (Yellow vests) movement is only the most famous example.

At the same time Macron is trying to assure everyone things will be alright and they can put their retiring livelihoods into his profoundly neoliberal hands, his administration sent the police unions a letter saying police pensions would remain unchanged by the government, whatever happened to anyone else. If there was one lesson the Roman emperors who once held Gaul passed on to their successors it was pay the people who fight for you, and pay them well. Macron claims not to be an autocrat, but he sure pays his muscle like one.

This strike is now ongoing, and having caught one of the last trains to Paris, I appear to be staying for a while. Words and pictures to follow, and I have more details and pictures in this Twitter thread. 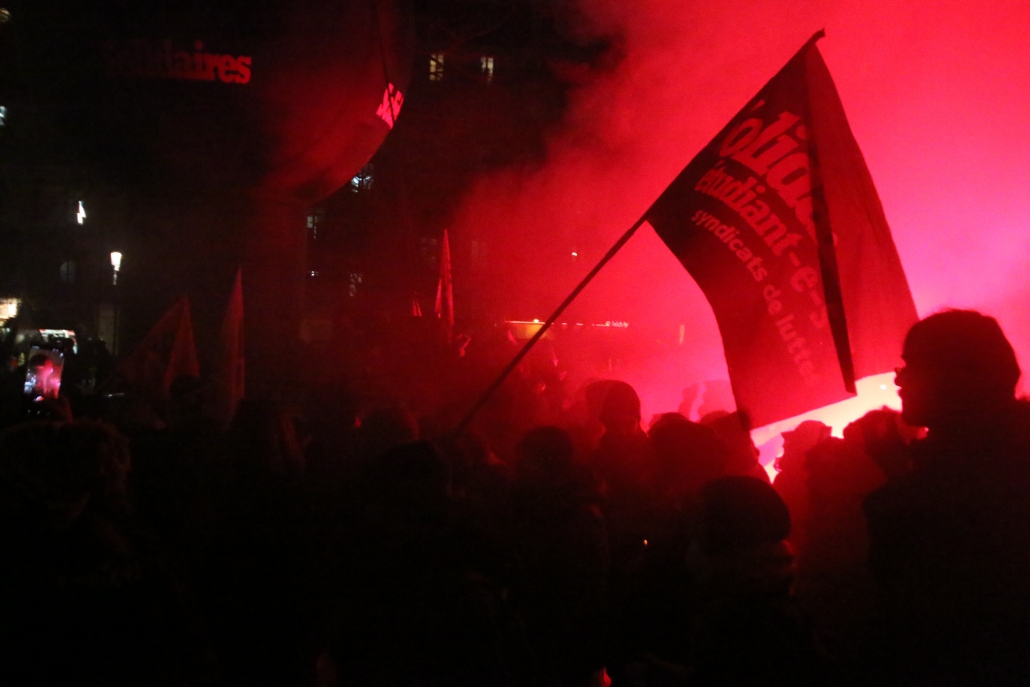 As the last of the unions enter Place de la Nation, it turned into a bit of a dance party complete with Algerian Hip Hop.