Way back in 2001, Victoria Toensing wrote an article justifying the subpoena of phone records of her future client, John Solomon, to find out who leaked details to him that Democratic Senator Robert Torricelli had been picked up on a wiretap of a mob figure. In it, she justified serving limited subpoenas, approved by Robert Mueller, on a third party carrier to find out who had committed a crime. She emphasized there was nothing political about the subpoena of Solomon’s phone records.

By ensuring that journalists not be subpoenaed every time they possess evidence, the department was demonstrating its respect for the press’s constitutional role.

The guidelines set down specific conditions that must be met before a subpoena can be issued for a reporter’s telephone records: There must be reasonable grounds to believe a crime has been committed; the information sought must be essential to a successful investigation; the subpoena must be narrowly drawn; all reasonable alternative steps must have been pursued, and the attorney general must approve the decision. The department has 90 days to notify the reporter of a subpoena to a third party, such as a telephone company.

Were those conditions met in Solomon’s case? Clearly, yes. His articles state that wiretap information was disclosed. The subpoena was limited, asking for home phone records for a period of six days, May 2 through 7. The U.S. attorney, Mary Jo White, certified that all alternative steps had been taken. Then-Acting Deputy Attorney General Robert S. Mueller III (now the FBI director) approved the subpoena — Ashcroft having recused himself. Solomon received his timely notice.

Eighteen years later, Toensing is outraged that her own phone records were collected by the constitutionally appropriate authority in the investigation of multiple crimes. 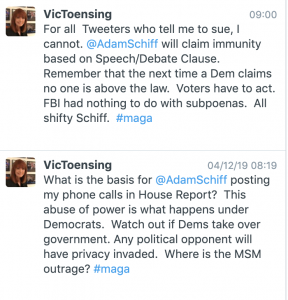 A table of the April call records described in the report suggests the subpoena apparently targeted Lev Parnas — someone already indicted for crimes related to this investigation — and Rudy Giuliani — who’s a subject of that same investigation. (h/t Kelly for the table)

Nevertheless, in addition to Toensing and Solomon, the subpoena obtained records showing calls with Devin Nunes, several of the staffers most involved in sowing conspiracy theories, and numbers believed to involve the President (who is the subject of this investigation).

The apparent fact that Schiff obtained all these records by targeting two suspected criminals hasn’t comforted the GOP, which is trying to claim that he violated the law or norms in issuing a subpoena.

One particularly delectable version of such complaints comes from Byron York. For some inconceivable reason, York decided to contact John Yoo — who, on multiple occasions in the year after Toensing wrote her column justifying a subpoena, wrote legal memos authorizing efforts to collect all phone records in the US with no legal process. York asked Yoo about whether subpoenaing AT&T for the phone records of two people as part of an impeachment investigation was proper.

John Yoo expressed a heretofore unknown respect for privacy. Even while he admitted that this presents no attorney-client problems, he suggested it would be proper for the White House to try to pre-empt any such subpoena.

For example, when one party to a lawsuit has to hand over documents to the other party, it can redact the content of the document if it is attorney-client privileged or withhold the document itself, but not the fact of the document’s existence (there is usually a log created that sets out the from, to, date information, etc.).

That is a separate question from whether Giuliani and Nunes had any constitutional rights violated by the House when it obtained these records. I am surprised that Giuliani and the White House did not think this would come up and sue their telecom providers to prevent them from obeying any demands from the House for their calling records.

York then quotes a policy from Reporters Committee for Freedom of the Press that shows this subpoena — which did not target Solomon — does not fall under RCFP’s stated concern for subpoenas used to find out a journalist’s sources.

Courts…have begun to recognize that subpoenas issued to non-media entities that hold a reporter’s telephone records, credit card transactions or similar material may threaten editorial autonomy, and the courts may apply the reporter’s privilege if the records are being subpoenaed in order to discover a reporter’s confidential sources.

Schiff, Pelosi, Nadler have trashed the U.S. Constitution and are enabled by a pathetic fawning press. They have proceeded without respect for attorney-client privilege, including threats of contempt and imprisonment.

Here’s the thing. Either Rudy Giuliani was acting as a person the President appointed to pursue the foreign policy of the United States — something Republicans have, at times, argued in their attempts to defend the President.

As Yoo notes, Rudy (and Jay Sekulow and Toensing) would not have an attorney-client claim over metadata in any case. But Rudy nevertheless claims Trump’s privilege has been implicated in these call records.

With that claim, he confirms that his client violated his oath of office.