This post and thread are dedicated to today’s scheduled House of Representatives’ activities related to impeachment of Donald J. Trump, including the planned six hours of debate and the subsequent vote.

Live stream the House’s impeachment activities at these links:

We can expect many tactics to filibuster and delay the debate — we’re already seeing GOP resolutions submitted (and tabled) to this end.

Last night’s #NotAboveTheLaw rallies across the country demonstrate the level of support for today’s historic action. Americans don’t stand in the dark, cold, rain, and snow if they aren’t seriously committed to protecting their democracy. They are rallying again this morning ahead of the debate and votes.

You can do your bit to support our democracy even if you can’t attend a rally this morning. Call your representative and tell them you support a vote for impeachment.

You can also push back at Senate Majority Leader Mitch McConnell’s efforts to deter a Senate trial by calling your senators and insisting they do not join McConnell’s effort to accumulate 51 votes to dismiss a trial. Let the people hear witnesses under oath before the Senate, including Trump in his own defense.

The House Rules Committee has been debating the rules of the impeachment proceeding this morning, vote on rules now complete. Along party lines, of course.

If you are looking for additional information regarding the House investigation leading up to impeachment and today’s impeachment itself, check these sources:

CNN doesn’t appear to have an impeachment page but they have one on Trump: https://www.cnn.com/specials/politics/president-donald-trump-45

House clerk just read the revised rules and articles of impeachment; Speaker Pelosi is now up and offering opening remarks to launch the six hours of debate.

Let’s do this, keep our republic.

Rep. Doug Collins has offered the minority remarks which I freely admit to muting because it’s the same bullshit whining offered too loud.

For quieter coverage, here are live Twitter threads of the impeachment debate:

The House is now voting on the first article of impeachment for abuse of power. Each member will cast their vote electronically from within the House within a 15-minute window. 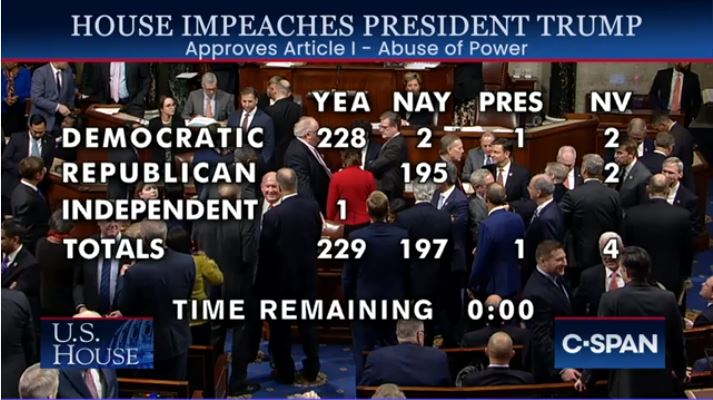 House now voting on second article of impeachment for obstruction of Congress. 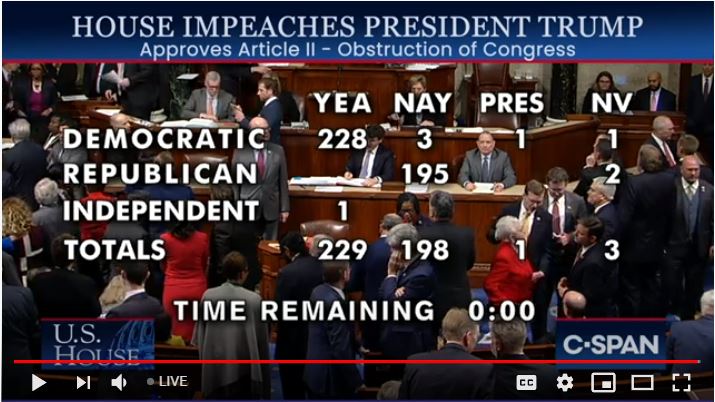 (I confess I forgot to check the clock for the time when Pelosi hit the gavel.)

Van Drew has said he is leaving the Democratic Party and becoming a Republican. Why he simply didn’t retire I don’t know because his chances of winning aren’t good in a blue wave.

Collin Peterson represents a very rural and overwhelmingly white portion of western Minnesota and is a pro-life Dem.

Tulsi Gabbard. This one is self-explanatory.

Jared Golden had indicated he was going to split his votes, saying he didn’t think the Dems had proven a threshold had been met for “high crimes and misdemeanors” with the second article. The second article seems so clear — witnesses and documents were subpoenaed as part of an impeachment inquiry, and Trump refused to allow compliance with the subpoenas — that Golden has stretched beyond rationality his effort to “work with the president.”

Golden had said, “…while the president’s resistance toward our investigative efforts has been frustrating, it has not yet, in my view, reached the threshold of ‘high crime or misdemeanor’ that the Constitution demands. For that reason, I will vote against Article II of the House resolution regarding obstruction of Congress.” If this were a criminal investigation and a target refused to comply with a subpoena, they’d be facing a charge of obstruction. Golden simply chose to split the wrong baby at the wrong time.

And I hope Stephen King, he of the myriad horror novels, gets a more progressive Democratic candidate to primary and win Golden’s seat.

Updates during the course of House activities will appear at the bottom of this post.