How Paul Manafort Lied to Mueller to Protect Jared Kushner

Paul Manafort appears to have saved the President’s son-in-law by lying to Mueller’s prosecutors.

The 302 records the last interview before he sealed his plea deal (starting at PDF 223). Much of it focuses on how the campaign dealt with WikiLeaks. The 302 includes the following topics:

Between topic 8 and 9, the 302 also captures the basis for one of Mueller’s claims that Manafort lied during his cooperation agreement, an allegation (that Judge Amy Berman Jackson upheld) that Manafort lied about another DOJ investigation to protect someone.

I laid out what the breach determination disclosed about the investigation here. Basically, shortly before Manafort left the campaign, someone (which it’s now clear is almost certainly Roger Stone and indeed appears to have come up in Stone’s trial) offered up a way to save the candidate. The question is how closely involved someone else — someone with a 7-character name — got involved in this effort to save the candidate. According to the breach proceedings, Manafort told one story that incriminated the person with a 7-character name when first interviewed, prior to getting his plea deal, on September 13 (that is, in this 302). But when Mueller’s team brought prosecutors from another investigation in to hear the story on October 5, Manafort at first gave a very different version, one that was much less incriminating to that 7-character name person, a version that aligned with the story that person was telling the FBI at the time, and that put more of the blame on the 5-character name person, presumably Stone.

It appears highly likely that the person he was protecting was Jared Kushner.

In the breach hearing (discussion starts on page 110), the names of both people involved are redacted. 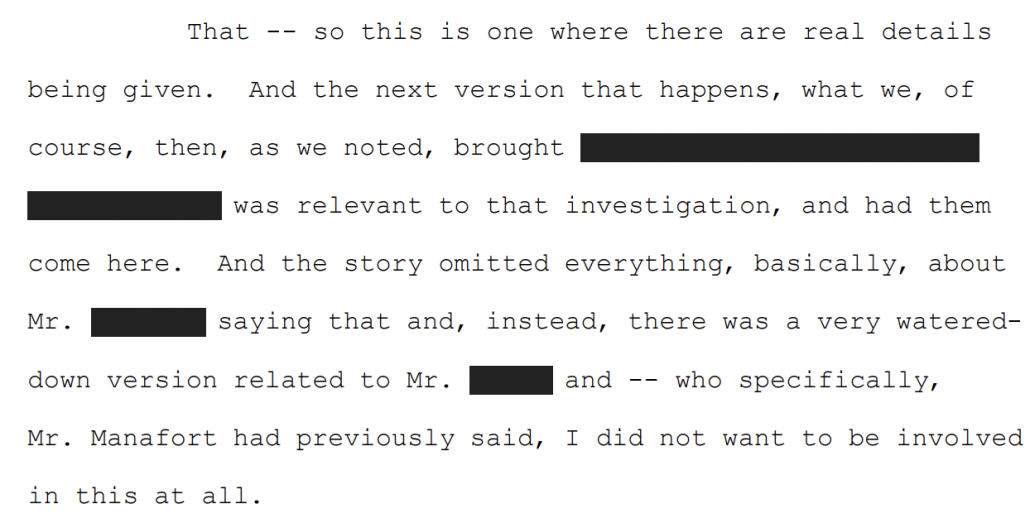 But in the 302 released yesterday, Kushner’s name is not redacted. 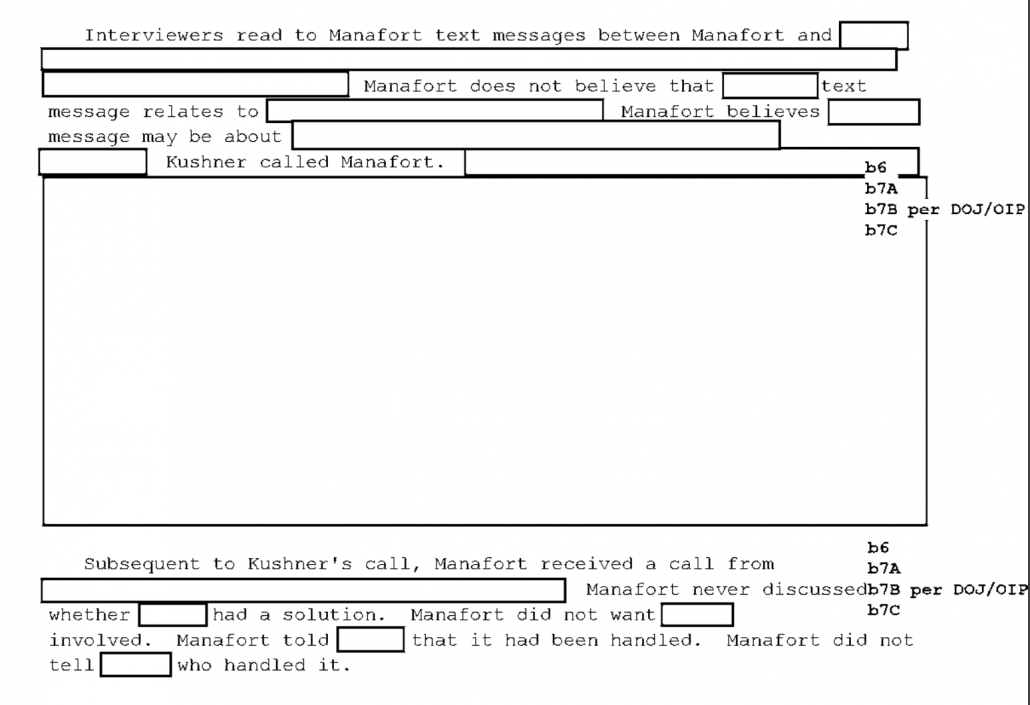 Numerous times in Paul Manafort’s texts with Sean Hannity (who, in another of the 302s released yesterday, he admitted to treating as a back channel to Trump), Manafort talked about his certainty that Mueller would go after Kushner. Indeed, he claimed that’s who he would have to give up to get a plea deal.

We now know he discussed Kushner the day before he got a plea deal. And then he reneged on telling that story.

As I disclosed in 2018, I provided information to the FBI on issues related to the Mueller investigation.