Pat Cipollone Believes the Golden Rule Is for Chumps 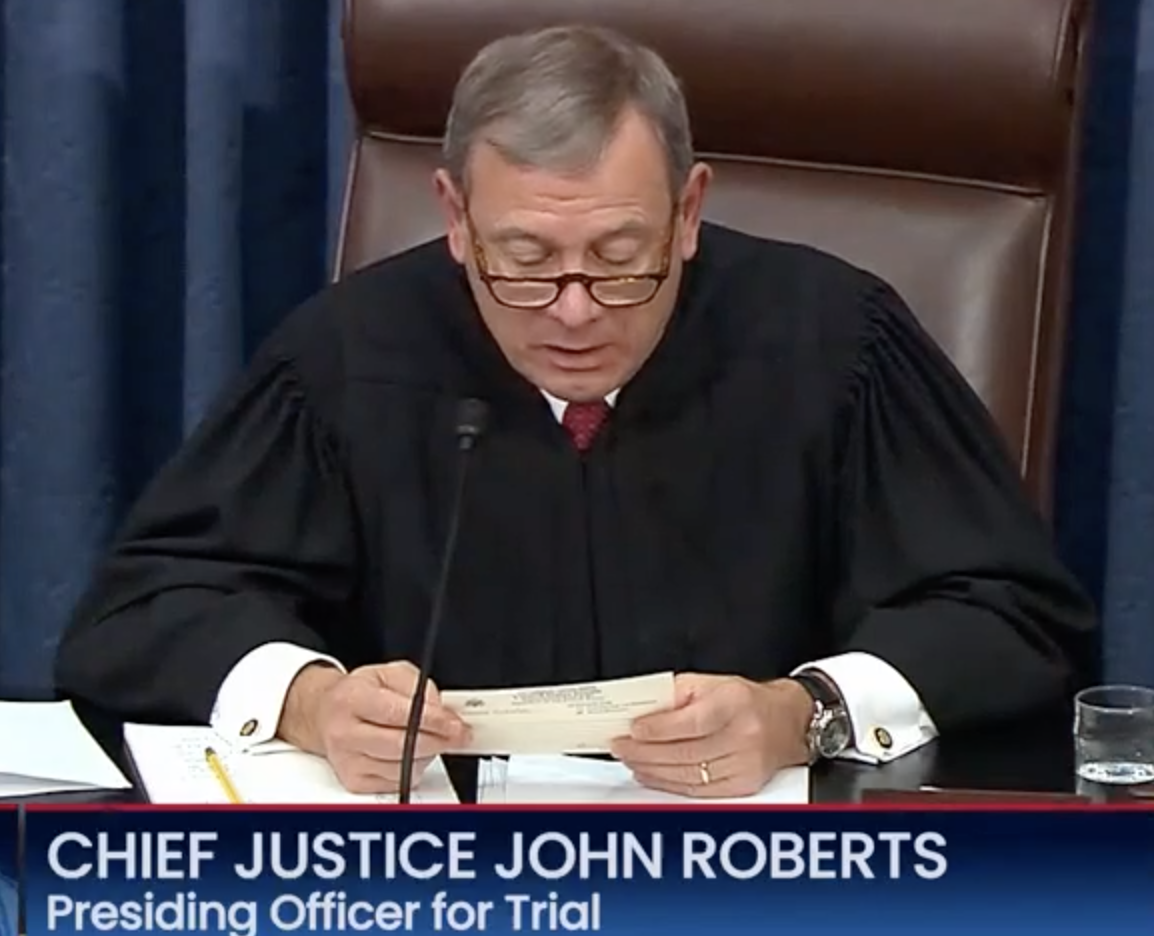 The question and answer phrase of the Senate trial is far more interesting than the presentation of the cases. Both parties are obviously feeding their own side questions to rebut the other, or posing questions they think will make the other stumble (Chief Justice John Roberts has reportedly censored only one kind of question: any question that probes for the whistleblower’s name).

Later last night, the questioning became interesting for the whip count. There were a couple of questions posed by large numbers of Senators on record supporting Trump, including vulnerable swing state Senators like Martha McSally, Thom Tillis, and Cory Gardner, and it was interesting to see who else jumped on questions that obviously served only to suck up to Trump.

Over the course of several questions, there was a discussion on whether Roberts could rule on the appropriateness of witnesses or Executive Privilege. Pat Philbin argued that he could not, on EP (contrary to the rules), in response to which Schiff came back and said he could. Schiff argued that the Democrats would accept Roberts’ views without challenge. Jay Sekulow piped in to say Republicans would not. I keep thinking about how Roberts will be ruling on some of these issues on other appeals, and I think Schiff is playing to him on some questions as much as to the Senate.

Questions being asked by leaners (people like Lisa Murkowski and Susan Collins, who have asked a number together, though it seems like Mitt Romney went from leaning to supporting questions) are of particular interest. At one point, Collins asked why the House didn’t include bribery in its articles. Hakeem Jeffries gave an answer that Collins visibly responded to by saying, “he didn’t answer my question,” but Schiff came in shortly after and did answer it, pointing out that all the elements of bribery are included in the abuse of power article. Collins also asked the President’s lawyers what Trump had done on corruption in Ukraine prior to last year, which Philbin didn’t answer and then, when the question was re-asked by Democrats, said he couldn’t answer because it’s not in the record (though he has relied on non-public information elsewhere).

Pat Philbin answered a question about whether it was okay to accept dirt to win an election. He said it was.

I was most interested, however, in a response Sekulow gave to a question offered by Marco Rubio and others, people who presumably were just feeding softballs to strengthen the President’s argument. They referenced a claimed principle espoused by Dersh and Sekulow, wherein you should always imagine how it would feel if the other party were impeaching a president of your party on the same fact set, which was originally a way to excuse Dersh’s flip-flop on abuse of power and impeachment. Rubio and others asked where the limiting factors on this would be — basically an invitation to repeat what Trump’s lawyers have said in the past, that you shouldn’t impeach within a year of an election or some such thing. Except Sekulow would not offer general principles. Instead of referencing the election — the right answer to the softball question — he focused on the claimed uniqueness of this impeachment (which is bullshit in any case). In other words, given an opportunity to answer a question about principles that would adhere beyond this impeachment, Sekulow answered that his Golden Rule only applies ot this impeachment.