The Black Hole Where SSCI’s Current Understanding of WikiLeaks Is

Four years after it started, the Senate Intelligence Committee continues its investigation into Russia’s 2016 election interference, this week releasing the report on what the Obama Administration could have done better. For a variety of reasons, these reports have been as interesting for their redactions or silences as for what the unredacted bits say.

This latest report is no different.

Putin responded to Obama’s warnings by waggling his nukes

The most interested unredacted bit pertains to Susan Rice’s efforts, scheduled to occur just before ODNI and DHS released their report attributing the hack to Russia, to warn Russia against continuing to tamper in the election. That would place the meeting at just about precisely the moment the Access Hollywood video and Podesta email release happened, a big fuck you even as Obama was trying to do something about the tampering. The meeting also would have occurred during the period when Sergei Kislyak was bitching about FBI efforts to prevent Russia from sending election observers to voting sites.

The description of the meeting between Rice and Kislyak is redacted. But the report does reveal, for the first that I heard, that Russia responded to being warned by raising its nukes.

Approximately a week after the October 7. 2016. meeting, Ambassador Kislyak asked to meet with Ambassador Rice to deliver Putin’s response. The response, as characterized by Ambassador Rice, was “denial and obfuscation,” and “[t]he only thing notable about it is that Putin somehow deemed it necessary to mention the obvious fact that Russia remains a nuclear power.”

This exchange is all the more interesting given that there’s an entirely redacted bullet (on page 37) describing actions that “Russian cyber actors” took after Obama warned Putin. Given that the state and county scanning and the alleged hack of VR Systems shows up, there’s something we either still don’t know about or SSCI continues to hide more details of the VR Systems hack.

The page long post-election response to the election year attack

The longest subsection in a section devoted to describing Obama’s response is redacted (pages 39-41).

Here’s what the timing of the unredacted parts of that section is:

That might suggest that whatever secret action the Obama Administration took happened right in December, with everything else.

There’s a redacted passage that may undermine the entire premise of the John Durham investigation, which purports to review what agencies, other than FBI, did to lead to an investigation focused on Trump’s campaign. Some reporting suggests Durham is investigating whether CIA tricked FBI into investigating Trump’s flunkies.

But this report describes how, in spite of knowing about related Russian hacks in 2015 and Russia’s habit of leaking information they stole, the IC really wasn’t aware of what was going on until John Brennan got an intelligence tip during the summer of 2016. That intelligence tip was described at length in a WaPo story that resembles this section of the report.

Early last August, an envelope with extraordinary handling restrictions arrived at the White House. Sent by courier from the CIA, it carried “eyes only” instructions that its contents be shown to just four people: President Barack Obama and three senior aides.

Inside was an intelligence bombshell, a report drawn from sourcing deep inside the Russian government that detailed Russian President Vladi­mir Putin’s direct involvement in a cyber campaign to disrupt and discredit the U.S. presidential race.

But it went further. The intelligence captured Putin’s specific instructions on the operation’s audacious objectives — defeat or at least damage the Democratic nominee, Hillary Clinton, and help elect her opponent, Donald Trump.

At that point, the outlines of the Russian assault on the U.S. election were increasingly apparent. Hackers with ties to Russian intelligence services had been rummaging through Democratic Party computer networks, as well as some Republican systems, for more than a year. In July, the FBI had opened an investigation of contacts between Russian officials and Trump associates. And on July 22, nearly 20,000 emails stolen from the Democratic National Committee were dumped online by WikiLeaks.

But at the highest levels of government, among those responsible for managing the crisis, the first moment of true foreboding about Russia’s intentions arrived with that CIA intelligence.

The section in this report is redacted. 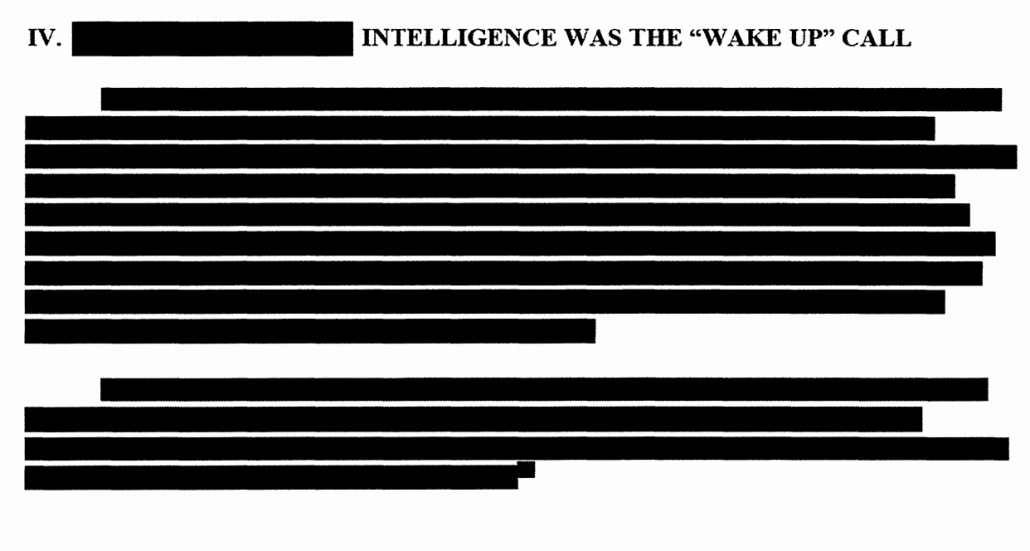 Effectively, this report seems to confirm the WaPo reporting (which may have been based off sources close to those who testified to SSCI). It also emphasizes the import of this intelligence. But for this intelligence, the IC may have continued to remain ignorant of Putin’s plans for the operation.

But the most interesting redactions pertain to WikiLeaks.

There are four redacted paragraphs describing how hard it was for the IC to come up with a consensus attribution for the hack and leak operation.

Senior administration officials told the Committee that they hesitated to publicly attribute the cyber efforts to Russia m1til they had sufficient information on the penetration of the DNC network and the subsequent disclosure of stolen information via WikiLeaks, DCLeaks, and Guccifer 2.0. 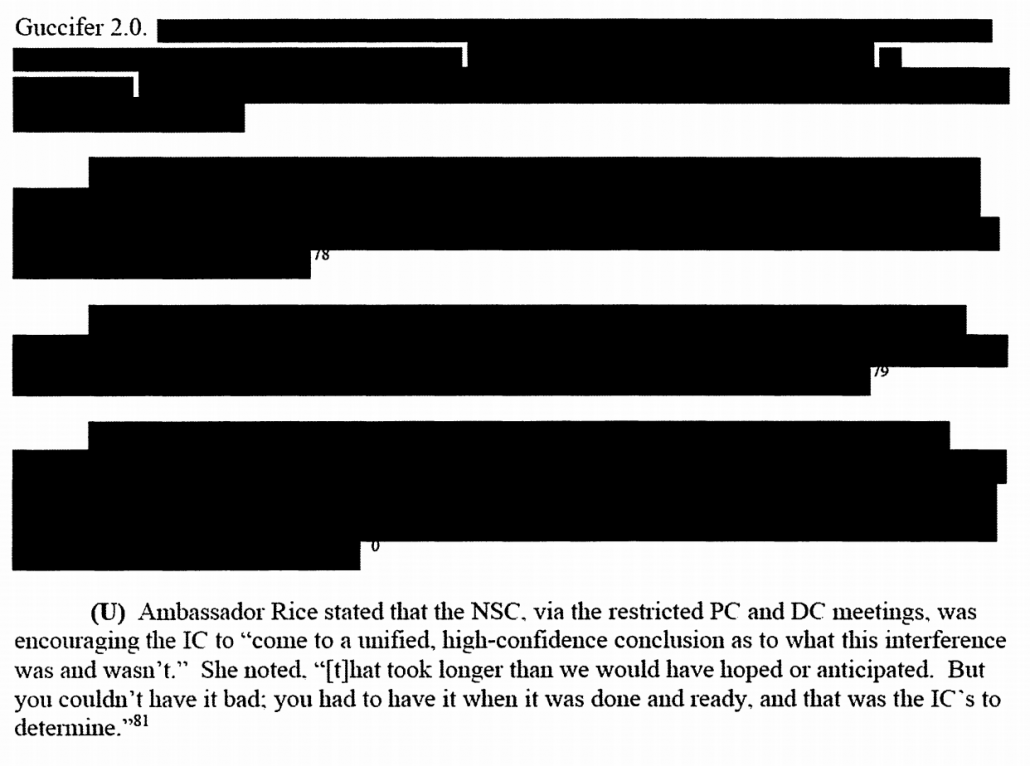 More interesting still, almost the entirety of the page-plus discussion (relying on testimony from Ben Rhodes, Michael Daniel, Paul Selva, Mike Rogers, and others) of why it took so long to understand WikiLeaks remains redacted. 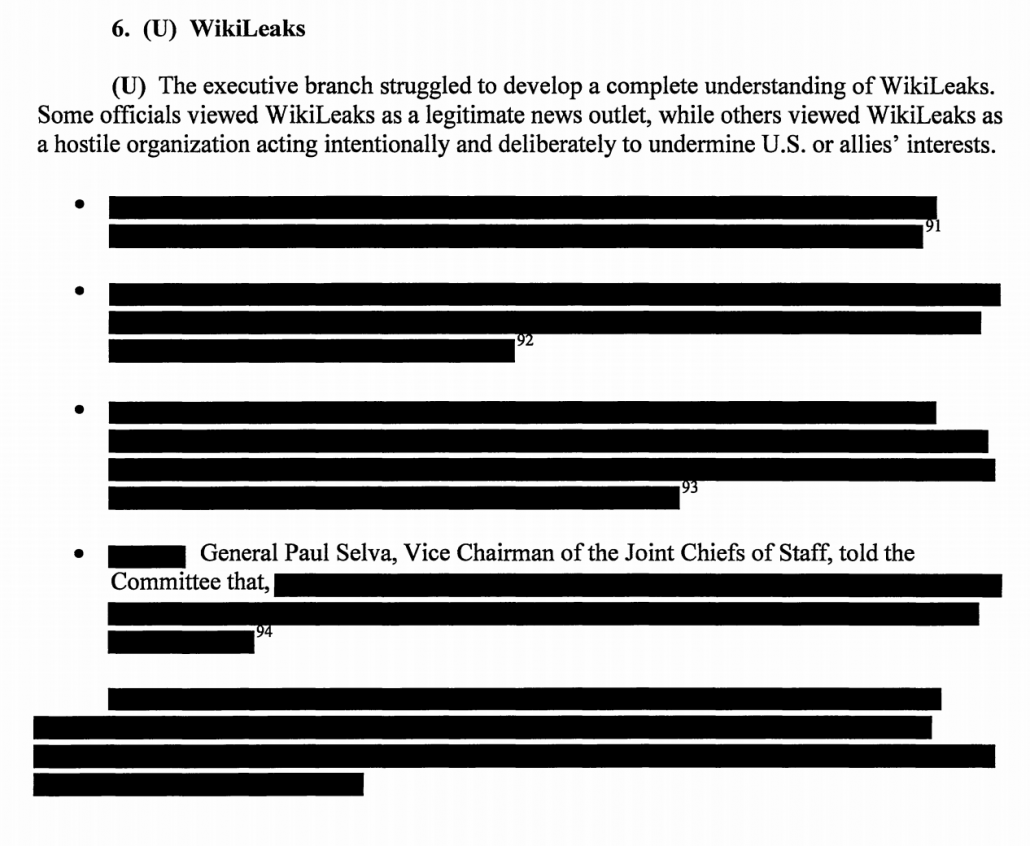 One reference that is unredacted, however, describes WikiLeaks as “coopted.”

This information would be of particular interest as the prosecution of Julian Assange goes forward. That — and the fact that some of this determination, relying as it does on former NSA Director Mike Rogers, appears to rely on NSA information — may be why it remains redacted.

Update: I’ve deleted the remainder of this post. It came from Wyden’s views, not the report itself.