As DOJ continues to respond to the BuzzFeed/CNN Mueller FOIAs by releasing big swaths of 302s (FBI interview reports) almost entirely redacted under b5 (deliberative) exemptions, there are a number of issues on which it is withholding information that are utterly critical to current debates.

For example, Trump renewed his claim the other day that Robert Mueller had interviewed for the FBI job before being named Special Counsel, which he claims presented a conflict. According to the Mueller Report, Steve Bannon, Don McGahn, and Reince Priebus all rebutted that claim, either on the facts or whether it presented a conflict. But Bill Barr’s DOJ has withheld all of McGahn’s 302s, as well as the Bannon one (from October 26, 2018) cited in the Mueller Report on this topic. And DOJ redacted all the substantial discussion of what Reince Priebus told the President about this purported conflict in his. 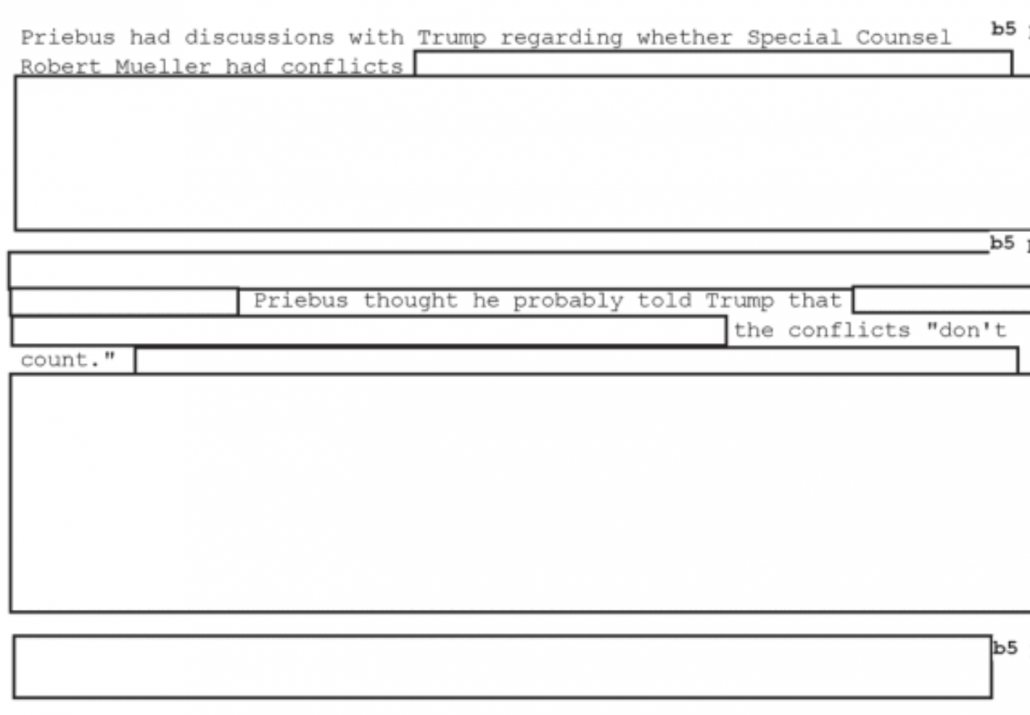 Plus there’s substantially redacted material in the Rod Rosenstein 302 that pertains to this topic (and possibly also in Jody Hunt’s 302). Which is to say that DOJ is letting the President make repeated assertions about this topic, while withholding the counter-evidence under claims of privilege.

A more glaring example, however, involves Mike Flynn. In response to the FOIA, DOJ has only released the same January 24, 2017 302 that got released as part of Flynn’s sentencing. Even as Barr has planted outside reviewers in the DC US Attorney’s office to second-guess Flynn’s prosecution, DOJ is withholding 302s that — the government has suggested — show that Flynn wasn’t even all that forthcoming after he was purportedly cooperating with Mueller.

Even Flynn himself released a sworn declaration revealing that his Covington lawyers told him his first interview with Mueller, on November 16, 2017, “did not go well.”

More urgent, given today’s news that Julian Assange’s lawyers will claim that when Dana Rohrabacher met with Assange in August 2017 about trading a pardon for disinformation about Russia’s involvement in the 2016 operation, DOJ is withholding details about conversations Flynn participated in during the campaign about WikiLeaks, including a possible effort to reach out to them after the John Podesta release.

The defendant also provided useful information concerning discussions within the campaign about WikiLeaks’ release of emails. WikiLeaks is an important subject of the SCO’s investigation because a Russian intelligence service used WikiLeaks to release emails the intelligence service stole during the 2016 presidential campaign. On July 22, 2016, WikiLeaks released emails stolen from the Democratic National Committee. Beginning on October 7, 2016, WikiLeaks released emails stolen from John Podesta, the chairman of Hillary Clinton’s 2016 presidential campaign. The defendant relayed to the government statements made in 2016 by senior campaign officials about WikiLeaks to which only a select few people were privy. For example, the defendant recalled conversations with senior campaign officials after the release of the Podesta emails, during which the prospect of reaching out to WikiLeaks was discussed.

Assange has created a firestorm with the mere allegation — one already reported in great depth in real time — that Trump was involved in the 2017 Rohrabacher effort.

Except Mike Flynn’s 302s report something potentially more inflammatory: that the campaign started pursuing this effort in October 2016.

Back Channel: How Sean Hannity Came to Believe “Every Word [Assange] ... Bill Barr’s Past Statements Say Pardoning Roger Stone Would Be Obstru...