The Inconsistencies of the UC Global Julian Assange Spying Story

Tomorrow, the first of two extradition hearings for Julian Assange starts. In addition to the least damning of several pardon discussions that happened with Assange, the hearing will include discussion of allegations that Assange was spied on in the Embassy, the most recent incarnation of which appeared in the Australian press today. In addition, NYT covered the story here, some key El País stories are here, and Andrew Müller-Maguhn did a presentation on it at CCC.

The story goes that a Spanish company employed to ensure security in the Ecuadorian Embassy, UC Global, significantly ratcheted up the level of video and audio surveillance of Assange in 2017. Additionally, Spain is investigating whether the head of that company, David Morales, shared that surveillance — possibly in real time — with the United States, allegedly directly with the CIA.

I’d like to point to some inconsistencies in the stories. I’m not defending the levels of surveillance of Assange — but neither would I defend the gross abuses of privacy WikiLeaks has committed against private citizens in the US, Turkey, Saudi Arabia, and other countries. Nor am I contesting that the surveillance took place. I’m even willing to stipulate that the surveillance got shared with the US (though no story on this topic convincingly substantiates this, and some of the public bases for the claim CIA was the recipient are flimsy).

What legal regime has jurisdiction

One interesting question about all this pertains to the legal regime. This is surveillance conducted by a Spanish company with US business locations on Ecuadorian territory being raised in a post-Brexit British legal proceeding regarding extradition to the US. The surveillance of the embassy is Ecuador’s concern — and whatever you think of Rafael Correa’s Bolivarist politics, he embraced really intrusive surveillance. The sharing of data from the EU to the US — whether directly from the UK or via Spain — might come under GDPR or Privacy Shield protection, except EU law excepts out national security from these laws, which would apply here. And because UC Global does and did business in the US (it even had a location in New Mexico in 2016), it might be subject to subpoena or other legal process to conduct surveillance.

As it pertains to the question of extradition, as I understand it, the law in the UK has to do with proportionality, and as we’ll see, what we’re really talking about is surveillance of Assange during a period of investigation of one of the worst breaches of any Five Eyes intelligence agencies in history, Vault 7 (not the 2016 publications), and the surveillance ratcheted up during a period when WikiLeaks was still publishing those files. Which likely means the UK is going to be very permissive in how it weighs the question of this surveillance, because this was about an investigation into someone who helped burned a Five Eyes spying partner to the ground.

The escalation of surveillance happened after Vault 7 started

Virtually all of these stories obscure the timing, as illustrated by this AMM slide. 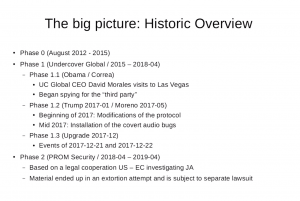 A key part of the story suggests that because UC Global owner Morales got a contract with Sheldon Adelson in 2015, under the Obama Adminsitration, that somehow proves CIA involvement, and some of the reports on this make it clear that UC Global was working for Adelson, which negates the entirety of his role. Sillier still, that Morales traveled to Chicago is no indication of a tie to CIA.

Once you’ve dismissed that, then it’s clear the escalation didn’t start in earnest until June and July 2017. 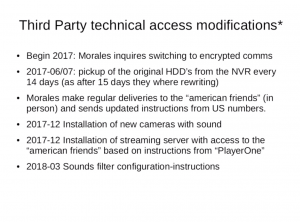 In his talk, AMM mentions that the US was unhappy about certain “publications,” plural, without describing them. There’s good reason to be silent about it — the same silence that WikiLeaks supporters like to enforce elsewhere. WikiLeaks was not only publishing CIA’s hacking tools with thin — and inaccurate — claims to justify doing so in the guise of journalism, but WikiLeaks was and is sitting on CIA’s actual hacking tools.

At the time, WikiLeaks was in ongoing communications with accused Vault 7 leaker Joshua Schulte (communication it continued at least as long as June 2018, when WikiLeaks posted the blogs Schulte published from jail, but probably even after that). The targeting of Schulte, himself, might explain some of this surveillance. And Morales’ presence in Alexandria (which AMM misstates as Arlington) is utterly consistent with someone subject to US subpoena appearing before a grand jury in EDVA; surveillance records are considered business records in the US subject to subpoena.

Certainly, questions about what WikiLeaks was doing with the still unpublished hacking tools might have elicited the surveillance. And in the months before the surveillance actually ratcheted up in December 2017 (which is when the surveillance in question really began), Schulte was doing some things on Tor that may have included reactionary communications with WikiLeaks.

Even AMM’s presentation, however, confirms that before December 2017 — that is, before the US finally detained Schulte and charged Assange — much of Assange’s private space was not covered by the surveillance. That actually dramatically contradicts claims about surveillance of Assange made in the past. 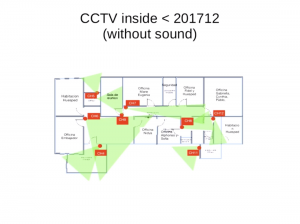 From there, all the stories make much about the events of December 21 and 22, 2017 (indeed, AMM presents the planned Ecuadorian-Russian exfiltration on those dates as a potential US kidnapping).

But here, too, the timing is obscured. The Australian piece, for example, suggests the surveillance put in place in anticipation of these events was a response to it.

“It got to the point where, during a visit to Mr Assange, the head of Ecuador’s intelligence service [Rommy Vallejo, on December 21, 2017] was also spied on,” Martinez added.

“In the meeting between Mr Vallejo and Mr Assange the possible release [from the embassy] of Mr Assange in a few days later was discussed.”

Within hours of that secret meeting, which was known to only a few people, the US Ambassador to Ecuador complained to Ecuadorian authorities, and the next day the US issued an international arrest warrant for Assange, Martinez said.

“That leads us to believe that the conversation was urgently sent to the US authorities and that they urgently issued the international arrest warrant the next day,” he said.

There’s a lot to be told about the events of December 21, which is the day Assange was actually charged. But events pertaining to Schulte preceded them. And Ecuador’s designation of Assange as a diplomat on December 19 — and the UK’s rejection of it — would have alerted the UK (and through them, the US) of the events two days before the meeting in question, without any surveillance.

Finally, as AMM notes, “PROM” took over surveillance after Ecuador made a security agreement with the US in April 2018. AMM suggests that that, for the first time, made such surveillance illegal. There’s no basis for that, particularly given that UC Global has a US component. Moreover, it was PROM, and not UC Global, that allegedly engaged in the corrupt sale of surveillance records, something that often gets lumped on UC Global.

In summary, say what you will about this surveillance, which clearly became oppressive in December 2017. Say what you will about whether obtaining all of CIA’s hacking tools and sitting on most of them is “journalism.” But if you’re going to talk about why surveillance ratcheted up, you do need to account for the fact that WikiLeaks was engaged in activities that resemble what CIA does, not what journalists do.

One of the key allegations is that this surveillance collected on conversations between Assange and his lawyers. The most recent Aussie version points to meetings with Geoffrey Robertson and Jennifer Robinson.

While this may be typical surveillance at a secure diplomatic property, what Robertson did not know was he and a handful of other lawyers, were allegedly being targeted in a remarkable and deeply illegal surveillance operation possibly run at the request of the US Government.

And recordings such as Robertson’s visit are at the heart of concerns about the surveillance: privileged legal conversations between lawyer and client in a diplomatic residence were recorded and, later, accessed from IP addresses in the United States and Ecuador.

Robertson was only one of at least three Australian lawyers and more than two dozen other legal advisers from around the world that were caught up in the surveillance operation.

Long-time WikiLeaks adviser Jennifer Robinson was one of the other Australian lawyers caught in the spying operation.

Jennifer Robinson is a pretty important lawyer for WikiLeaks, but even here she’s described as an “advisor.” And WikiLeaks has a long history of gaming legal representation, up to and including using it to obtain visibility about the defense of related persons.

Randy Credico even joked about how many people are claimed to be WikiLeaks lawyers at Roger Stone’s trial.

Q. Margaret Kunstler is one of WikiLeaks’s lawyers?

Robinson will present the Dana Rohrabacher story as a witness this week, so it’s worth attending to precisely what legal role these lawyers are playing.

Even if this surveillance was shared in real time with the United States, there are protocols in both the CIA and FBI about how to deal with it. The meetings were surveilled. That doesn’t mean the meetings with the lawyers actually representing him were viewed by American authorities.