The Kinds and Significance of Russian Interference — 2016 and 2020 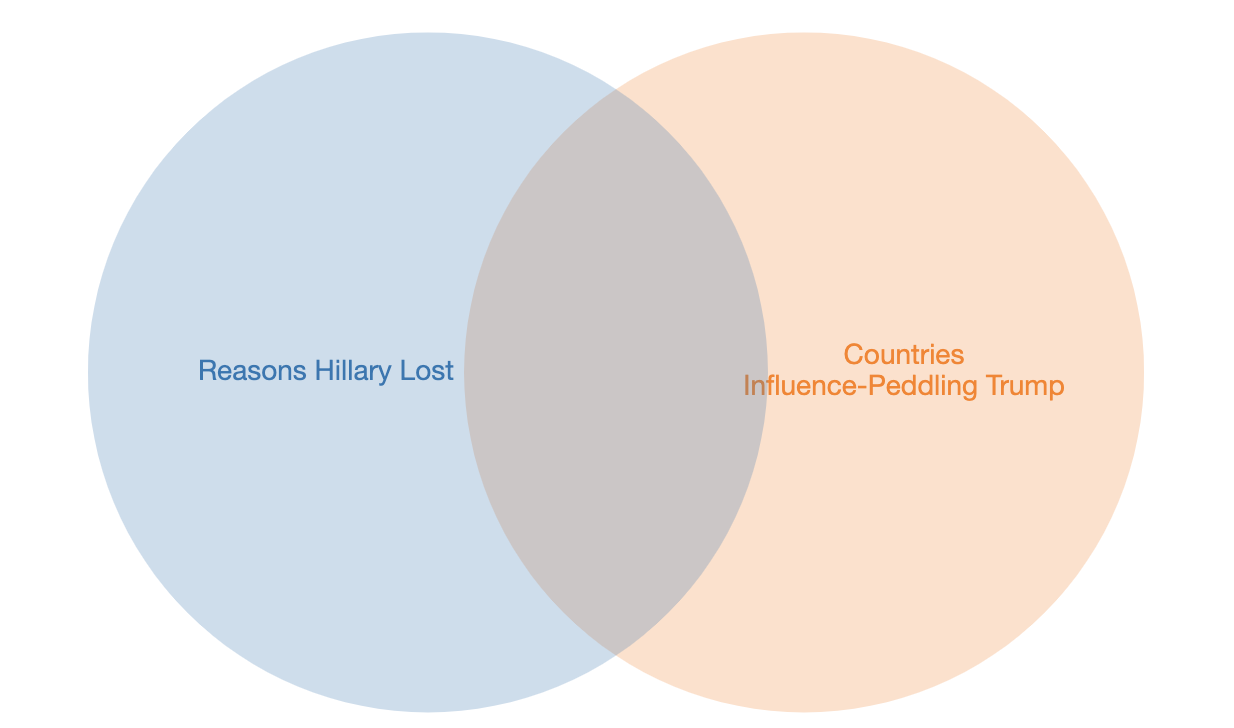 Trump’s meltdown last week — in which he purged top staffers at the Director of National Intelligence after a briefing on Russian interference in the 2020 election, followed by National Security Advisor Robert O’Brien making shit up on Meet the Press — has created a firestorm about Russian interference in the 2020 election. That firestorm, however, has spun free of what ways Russia interfered in 2016 and what effect it had.

First, remember that there were at least five ways Russia interfered in 2016:

The most obvious way Russia interfered in 2016 was by hacking the DNC, DCCC, and John Podesta (it also hacked some Republicans it did not like). It released both the DNC and Podesta data in such a way as to exaggerate any derogatory information in the releases, successfully distracting the press for much of the campaign and focusing attention on Hillary rather than Trump. It released DCCC information that was of some use for Republican candidates.

Roger Stone took steps — not all of which are public yet — to optimize this effort. In the wake of Stone’s efforts, he moved to pay off one participant in this effort by trying to get a pardon for Julian Assange.

In addition to creating a messaging problem, the hack-and-leak campaign created ongoing security challenges for Hillary. Someone who played a key role in InfoSec on the campaign has described the Russian effort as a series of waves of attacks. The GRU indictment describes one of those waves — the efforts to hack Hillary’s personal server — which came in seeming response to Trump’s “Russia are you listening” comment. An attack that is often forgotten, and from a data perspective was likely one of the most dangerous, involved a month-long effort to obtain Hillary’s analytics from the campaign’s AWS server.

Whatever happened with this data, the persistence of these attacks created additional problems for Hillary, as her staff had to spend time playing whack-a-mole with Russian hackers rather than optimizing their campaign efforts.

Putin’s “chef,” Yevgeniy Prigozhin, also had staffers from his troll factory in St. Petersburg shift an ongoing campaign that attempted to sow division in the US to adopt a specific campaign focus, pushing Trump and attacking Hillary. Importantly, Prigozhin’s US-based troll effort was part of a larger multinational effort. And it was in no way the only disinformation and trolling entity involved in the election. Both parties did some of this, other countries did some, and mercenaries trying to exploit social media algorithms for profit did some as well.

Tampering with the voting infrastructure

Russia also tampered with US voting infrastructure. In 2016, this consisted of probing most states and accessing voter rolls in at least two, though there’s no evidence that Russian hackers made any changes. In addition, Russian hackers targeted a vendor that provided polling books, with uncertain results. The most substantive evidence of possible success affecting the vote in 2016 involved failures of polling books in Durham County, NC, which created a real slowdown in voting in one of the state’s most Democratic areas.

In recent days, there have been reports of a ransomware attack hitting Palm Beach County in September 2016, but it is unclear whether this was part of the Russian effort.

Because there’s no certainty whether the Russian hack of VR Systems was behind the Durham County problems, there’s no proof that any of these efforts affected the outcome. But they point to the easiest way to use hacking to do so: by making it harder for voters in particular areas to vote and harder for specific localities to count the vote.

Some of what Russia did in 2016 — such as probes of a particularly conservative county in FL — may have been part of Russia’s effort to discredit the outcome. They didn’t fully deploy this effort because Trump won.

Finally, Russia accompanied its other efforts with various kinds of influence peddling targeting Trump’s aides. It was not the only country that did so: Saudi Arabia, Egypt, Turkey, UAE, and Israel were some of the others. Foreign countries were similarly trying to target Hillary’s campaign — and the UAE effort, at least, targeted both campaigns at once, through George Nader.

Importantly, however, these efforts intersected with Russia’s other efforts to interfere in the election in ways that tied specific policy outcomes to Russia’s interference:

As I’ll note in a follow-up, information coming out in FOIAed 302s makes it clear that Mike Flynn’s effort to undercut Obama’s December 2016 sanctions was more systematic than the Mueller Report concludes. So not only did Russia make it clear it wanted sanctions relief, Trump moved to give it to them even before he got elected (and his Administration found a way to exempt Oleg Deripaska from some of these sanctions).

Manafort continued to pursue efforts to carve up Ukraine until he went to jail. In addition, Trump continues to take actions that undercut Ukraine’s efforts to fight Russia and corruption. Neither of these have been tied to a specific quid pro quo (though the investigation into Manafort’s actions, especially, remained inconclusive at the time of the Mueller Report).

So while none of these was charged as a quid pro quo or a conspiracy (and the reasons why they weren’t vary; Manafort lied about what he was doing, and why, whereas Mueller couldn’t prove Don Jr had the mens rea of entering into a quid pro quo), Russia tied certain policy outcomes to its interference.

The Russian attack was more effective than it otherwise would have been for two reasons. First, because he’s a narcissist and because Russia built in plausible deniability, Trump refused to admit that Russia did try to help him. Indeed, he clings more and more to Russian disinformation about what happened, leading the IC to refuse to brief him on the threat, leading to last week’s meltdown.

In addition, rather than let FBI investigate the people who had entered into discussions of a quid pro quo, Trump obstructed the investigation. Trump has spent years now attacking the rule of law and institutions of government rather than admit what DOJ IG found — there was reason to open the investigation, or admit what DOJ found — there was reason to prosecute six of his aides for lying about what happened.

The Russian effort was just one of the reasons Hillary lost

It’s also important to remember that Russia’s interference was just one of the many things that contributed to Hillary’s loss. 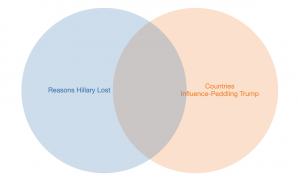 Other aspects were probably more important. For example, Republican voter suppression, particularly in Wisconsin and North Carolina, was far more important than any effect the VR Systems hack may have had in Durham County. Jim Comey’s public statements about the email investigation had at least as much effect as the Russian hack-and-leak campaign did on press focus. Hillary made some boneheaded choices — like barely campaigning in WI and MI; while I had worried that she made those choices because Russia tampered with her analytics (with the AWS hack), that doesn’t seem to have happened. Disinformation sent by the Trump campaign and associates was more significant than Russian disinformation. It didn’t help that the Obama Administration announced a sharp spike in ObamaCare prices right before the election.

As noted, Trump’s narcissism dramatically increased the effect of the Russian efforts in 2016, because he has always refused to admit it happened.

Compare that to Bernie’s response to learning that Russia was trying to help his campaign, which accepted that it is happening and rejected the help.

“I don’t care, frankly, who [Russian President Vladimir] Putin wants to be president,” Sanders said in a statement. “My message to Putin is clear: Stay out of American elections, and as president I will make sure that you do.

“In 2016, Russia used Internet propaganda to sow division in our country, and my understanding is that they are doing it again in 2020. Some of the ugly stuff on the Internet attributed to our campaign may well not be coming from real supporters.”

This was not perfect — Bernie could have revealed this briefing himself weeks ago, Bernie blamed the WaPo for reporting it when it seems like the story was seeded by O’Brien. But it was very good, in that it highlighted the point of Russian interference — sowing divisions — and it reaffirmed the import of Americans selecting who wins. Plus, contrary to Trump, there’s no reason to believe Bernie would pursue policies that specifically advantaged Russia.

There’s very serious reason to be concerned that Russia will hack the outcome of 2020. After all, it would need only to affect the outcome in a small number of precincts to tip the result, and the prospect of power outages or ransomware doing so in urgent fashion have grown since 2016.

That said, as with 2016, there are far more urgent concerns, and those concerns are entirely American.

Republicans continue to seek out new ways to suppress the vote, including by throwing large swaths of voters off the rolls without adequate vetting. There are real concerns about voting machines, particularly in Georgia (and there are credible concerns about the reliability of GA’s tally in past elections). Republicans have continued to make polling locations less accessible in Democratic precincts than in Republican ones.

And Bloomberg’s efforts this year — which include a good deal of trolling and disinformation — are unprecedented in recent memory. His ad spending has undercut the ability to weigh candidates. And his personnel spending is increasing the costs for other candidates.

Russian efforts to sway the vote are real. Denying them — as some of Bernie’s supporters are doing in ways that hurt the candidate — does not help. But, assuming DHS continues to work with localities to ensure the integrity of voting infrastructure, neither does overplaying them. Between now and November there’s far more reason to be concerned about American-funded disinformation and American money distorting our democratic process.