The State of Play: Joshua Schulte and Julian Assange

Last year, it looked like the Joshua Schulte trial, rescheduled in the fall to start January 13, would be done before the extradition hearing for Julian Assange started. Two things changed since then: Schulte got a delay until February 3, and then last month, Assange convinced Judge Vanessa Baraitser to split his extradition hearing into two, the first part lasting a week starting Monday, and then resuming on May 18 for three more weeks.

As a result, both men are in court during the same week, intersecting in interesting ways.

The first argument is a load of horseshit covering up the fact that the timing of the treatment of WikiLeaks as a non-state hostile intelligence service, the increased surveillance of Assange, and the initial December 21, 2017 charge all stem from WikiLeaks’ burning the CIA by publishing all its hacking tools. It’s horseshit, but it garners a lot of enthusiasm among WikiLeaks supporters who like to conveniently forget that, whatever Assange’s motivations were in 2010 (when he engaged in the acts he is charged with), he nevertheless helped Russia help Trump get elected. That said, even though the claims about what changed in 2017 are horseshit, it doesn’t change that the existing charges against Assange pose a real danger to journalism.

The second argument is far stronger. For each of the theories of prosecution under which Assange is charged — attempting to help Chelsea Manning crack a password, soliciting certain files via WikiLeaks’ wish list, and publishing a bunch of files in which the names of US and British sources were later revealed — Assange has at least a credible defense. Assange never succeeded, and could not have succeeded, in cracking that password. Manning didn’t leak the precise files that WikiLeaks had on its wish list (though did leak some of the same sets). WikiLeaks originally went to some effort to redact the names of sources, only to have a Guardian journalist release the password revealing them. Mind you, the extradition hearing is not the trial itself, so for these defenses to be relevant, WikiLeaks has to prove that the case against Assange is abusively weak.

The third argument, which is being argued today, is a more interesting legal question. Assange claims that the existing Anglo-US extradition treaty, passed in 2003, still prohibits extradition for political offenses like theEspionage Act. The US argues that Assange’s extradition is governed by the Extradition Act of 2003, which did not include such a bar (and also disagrees that these are political crimes). The lawyers are even arguing about the Magna Carta! Judge Vanessa Baraitser seems inclined to side with the US on this point, but the question will surely be appealed. Mind you, one of the charges against Assange, CFAA, is in no way a political offense, and the UK has not barred its own citizens, much less foreign citizens hanging out in foreign embassies, from being extradited on the charge (though several hackers, most recently Lauri Love, have challenged their extradition to the US for CFAA on other grounds).

Yesterday, Assange’s defense spent a good deal of time making the second argument. The US didn’t respond. Rather, it said it would deal with those issues in the May hearing.

Meanwhile, the Schulte trial is wrapping up, with Schulte doing little to mount a defense, but instead preparing an appeal. Yesterday, Schulte asked that an instruction on the defendant not testifying be added to the jury instructions (normally, these are included from the start, but Schulte has been claiming he would testify all this time). Today, Schulte told the court that Steve Bellovin won’t testify because he never got access to all the data Judge Paul Crotty ruled he couldn’t have access to (not mentioning, however, that the restrictions stemmed from Crotty’s own CIPA judgment).

I’m still unclear on the status of the witness, Michael. Schulte is trying to submit his CIA investigative report in lieu of finishing cross-examination (which is where things had left off). But it still seems possible that Crotty would require his testimony to be resumed, giving the government another opportunity to redirect his testimony. This is all likely happening today, but given that there’s so little coverage of the trial, we won’t know until Thursday.

Before all this happened, however, the jailhouse informant provided very damning testimony against Schulte, not only describing how Schulte obtained a phone (swapping an iPhone for a Samsung that he could load all the apps he wanted on it), but also claiming that Schulte said, “Russia had to help him with what he was doing,” launching an information war.” I had learned of similar allegations of ties or willingness to forge them with Russia via several sources in the past. And Schulte’s own jailroom notebooks include hints of the same, such as a bullet point describing how Russia could help the US “destroy itself.” 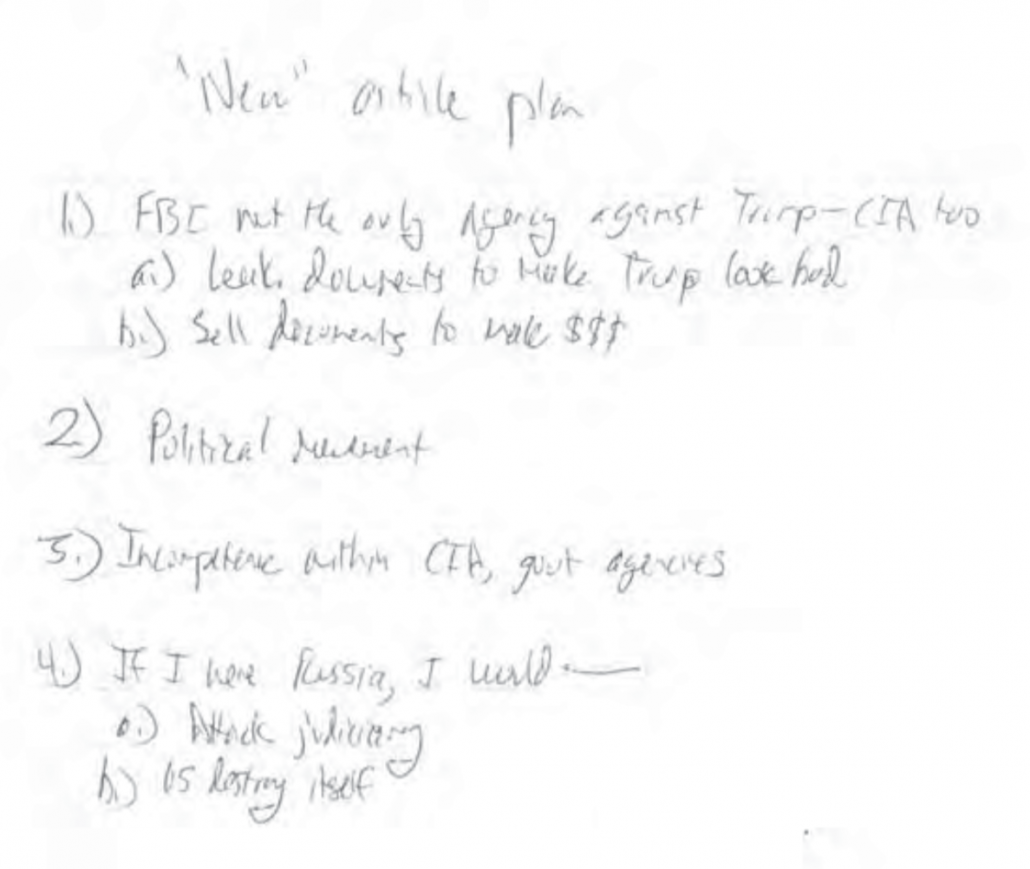 And his final plan — which the informant alerted his handlers to just before Schulte launched it — included some “Russia pieces.”

As part of the same plan to get fellow SysAdmins to leak all their secrets to WikiLeaks, then, Joshua Schulte was also hoping to encourage Russia to attack the US.

I’ve long said the Vault 7 case, if it were ever added to Julian Assange’s charges (including an extortion charge, which would also not be a political crime), would be far more damning and defensible than the ones currently charged. Filings from November suggested that the government had come to think of Schulte’s leaks to WikiLeaks as the last overt act in an ongoing conspiracy against the United States.

And by 2018, Schulte had come to see leaking to WikiLeaks as part of the same plan encouraging Russian attacks on the US, precisely the allegation WikiLeaks has spent years trying to deny, especially in the wake of Assange’s cooperation in Russia’s election year operation.

It’s not clear whether the US will add any evidence to the original 2010 charges against Assange before May (though Alexa O’Brien has pointed to where additional evidence might be), but the statement they’re waiting until then to rebut the solid defense that WikiLeaks is now offering suggests they might. That might reflect a hope that more coercion against Chelsea Manning will produce that additional evidence (she has renewed her bid to be released, arguing that such coercion has obviously failed). Or it might suggest they’ve got plans to lay out a broader conspiracy if and when Schulte is convicted.

Assange’s lawyers pushed for the delay to May in the first place. If the US government uses the extra time to add charges related to Vault 7, though, the delay may make a significant difference in the posture of the case.