Before the Trump Administration started really politicizing justice, Reggie Walton had already proven himself willing to stand up to the Executive Branch. During the George W Bush Administration, he presided over the Scooter Libby trial, never shirking from attacks from the defendant. And in the first year of the Obama Administration, as presiding FISA Judge, he shut down parts of the phone dragnet and the entire Internet dragnet because they were so far out of compliance with court orders.

And Walton had already showed his impatience with Trump’s stunts, most notably when presiding over a FOIA for materials related to the firing of Andrew McCabe. He finally forced DOJ to give the former Deputy FBI Director a prosecution declination so he could proceed with the FOIA lawsuit.

So it’s unsurprising he’s unpersuaded by DOJ’s request to dismiss the EPIC/BuzzFeed lawsuits over their FOIAs to liberate the Mueller Report, and has ordered DOJ to provide him a copy of the Report before the end of the month to do an in camera review of redactions in it.

To justify this review, Walton cites Barr’s silence about the multiple links between Trump and Russians and about the reason why Mueller didn’t make a decision about charging Trump with obstruction.

if [he] had confidence after a thorough investigation of the facts that [ ] President [Trump] clearly did not commit obstruction of justice, [he] would so state. Based on the facts and the applicable legal standards, however, [he] [is] unable to reach that judgment. The evidence [he] obtained about [ ] President[] [Trump’s] actions and intent presents difficult issues that prevent [him] from conclusively determining that no criminal conduct occurred. Accordingly, while th[e] [Mueller] [R]eport does not conclude that [ ] President [Trump] committed a crime, it also does not exonerate him.

Walton further cites claims that Barr made in his April 18 press conference and letter — where he specifically claimed Mueller had found no evidence of collusion — to judge that Barr lacked candor in his statements about the report.

Similar statements were made in his April 18, 2019 letter. See Def.’s Mot., Ex. 7 (April 18, 2019 Letter) at 1–3 (stating that Special Counsel Mueller’s “bottom-line conclusion on the question of so-called ‘collusion’ [was] [that] [t]he investigation did not establish that members of the Trump [c]ampaign conspired or coordinated with the Russian government in its election interference activities” and that “the evidence set forth in the [ ] [Mueller] [R]eport was [not] sufficient to establish that [ ] President [Trump] committed an obstruction-of-justice offense”).

Here, although it is with great consternation, true to the oath that the undersigned took upon becoming a federal judge, and the need for the American public to have faith in the judicial process, considering the record in this case, the Court must conclude that the actions of Attorney General Barr and his representations about the Mueller Report preclude the Court’s acceptance of the validity of the Department’s redactions without its independent verification.

Walton doesn’t say it explicitly, but he seems to believe what the unredacted portions of the report show amount to “collusion,” the kind of collusion Trump would want to and did (and still is) covering up.

Be warned, however, that this review is not going to lead to big revelations in the short term.

There are several reasons for that. Many of the most substantive redactions pertain to the Internet Research Agency and Roger Stone cases. Gags remain on both. While Walton is not an Article II pushover, he does take national security claims very seriously, and so should be expected to defer to DOJ’s judgments about those redactions.

Where this ruling may matter, though, is in four areas:

Update: Here’s the FOIA version of the Mueller Report; here is Volume II. The b1 and b3 redactions won’t be touched in this review. Where Walton might order releases are the b6, b7C redactions. I expect Walton may order these redactions removed, which show that Don Jr and someone else was investigated. 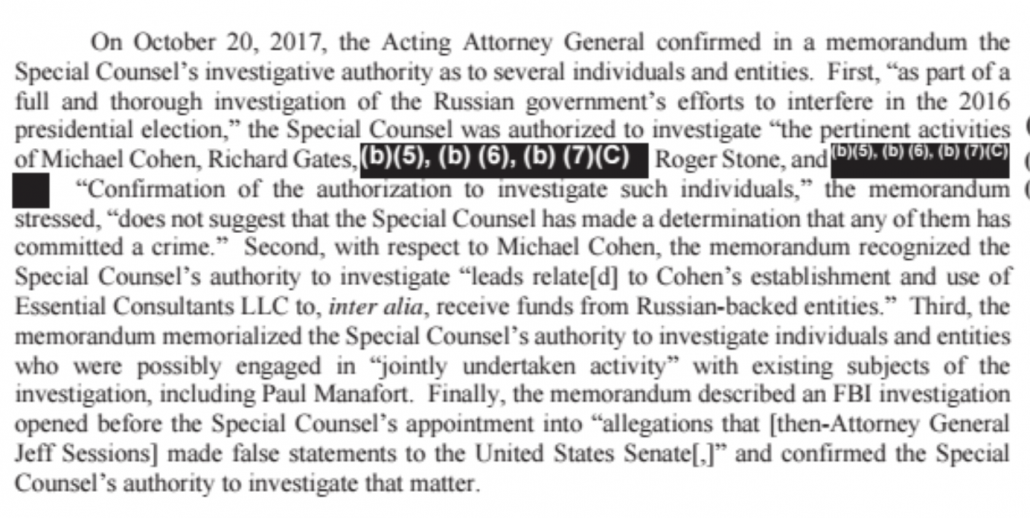 Update: I did a post last August about what Walton might do with these redactions. It holds up, IMO.

Amid Discussions of FISA Reform, James Boasberg Pushes for Greater Reform We Don’t Do That