King Josh in Jail, Part One: The Informant

The testimony on accused Vault 7 leaker Joshua Schulte’s conduct in MCC raised more questions than answers. So I want to do a series of three or four posts to look more closely at it (I’m using the term “King Josh” because it was one of his passwords at the CIA).

In this post I want to look at the jail house informant who is the publicly acknowledged basis by which prosecutors discovered that Schulte had a phone in jail, Carlos Bentances Luna Mera.

Betances is a 41 year old citizen of the Dominican Republic who twice migrated to the US without documentation, the first time in 1996 (he was deported in 2001), and then again around 2008. At some point, Betances married and had children. During both periods, he began to work as a low level cog in narcotics trafficking.

Betances was arrested on March 15, 2018 in conjunction with the trafficking. The only federal complaint unsealed in the docket is for illegal reentry, and in that magistrates docket, proceedings were continued in both April and May 2018, something that would happen if Betances were forgoing indictment and moving directly to a plea. Given his testimony, there must be a sealed criminal docket showing a guilty plea on nine counts covering multiple narcotics trafficking and conspiracy counts, illegal reentry, identity fraud, mail fraud, and taking a phone into jail.

That suggests that Betances flipped almost immediately, perhaps, at first, to cooperate against his network of suppliers. That’s consistent with an answer Betances gave when Schulte’s lawyer, Sabrina Shroff, suggested that cooperation on using a phone in jail, “was the most valuable to the government,” more than on all his narcotics charges. Betances responded, “Well, may I remind you that I had been cooperating before I talked to them?”

According to the testimony, Betances didn’t start spying on Schulte until sometime in summer 2018, at least four months after he was jailed, and didn’t first meet with prosecutors until September 2018. So the public story is that Betances got busted and flipped, managed to play a role in smuggling and hiding phones in jail that put him in a key spot to interact with Schulte and his cellmate, Omar Amanat (I’ll look at Amanat and his brother in the next post), and only after that happened witnessed something that led him to start taking pictures and videos of Schulte’s phone use. That went on for maybe a month before — aware that something big was going to go down in the library — Betances sent a note to the guards, who thwarted it. Some days later, Schulte was thrown in the SHU and a big hunt started for the phones and Schulte’s other activities in jail.

That thing that led Betances to prepare to inform on Schulte (again, per the testimony) is that one day sometime in the summer, Schulte said he wanted Russia’s help.

[W]e were in Chino’s cell [Chino was also part of the cell phone smuggling and sharing network] and I heard Josh saying that Russia had to help in in the things that he was doing.

Here’s how Betances described it on cross (through a translator) to a very dubious Sabrina Shroff:

Shroff: So anyway, it’s you who walks in when Mr. Schulte and Omar are talking, correct?

Shroff: And you walk in to give them a heads-up that somebody’s coming, correct?

Shroff: And just as you walk in, you hear him say the word “Russia,” correct?

Shroff: And that’s what prompts fear into you to go cooperate with the United States Attorney’s Office?

Betances: It sounded interesting to me.

Hearing Schulte mention Russia led Betances to do a remarkable amount of surveillance on Schulte’s phones, which he stored for him behind his cell locker.

He took two pictures of the apps Schulte loaded onto the phone, and — per his testimony — got Schulte and Amanat to explain the function of WhatsApp, Signal, Proton Mail, Orbot, Turbo VPN, and Secure Delete. Betances also got pictures of the things Schulte was writing on his phone, including the initial emails to Shane Harris that would form part of the basis for the Espionage Act charges on which the jury was hung. 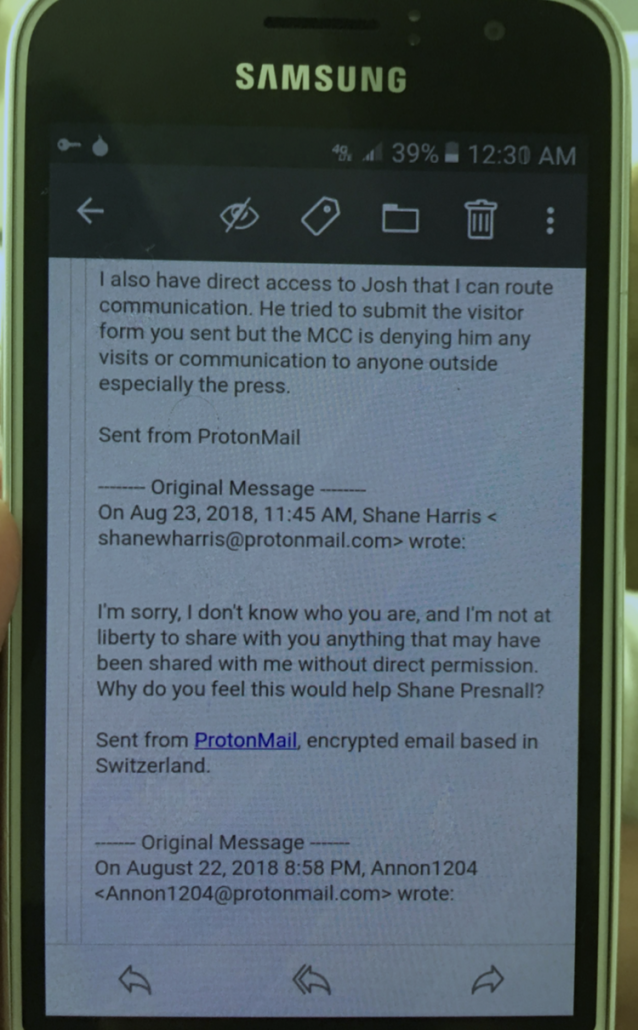 He took several videos of Schulte using his phone.

After having taken these pictures on September 1, Betances waited around three weeks before he alerted the guards that something big was going down in the library, and then was removed from MCC when guards found at least some of these phones in his cell.

Shroff: And before you decided to cooperate, you simply decided to take photos, is that your testimony?

Betances: Just to be clear with the defense attorney’s question in deciding to cooperate, when they were working on sending whatever they were going to send from the library, that’s when I decided to cooperate.

Shroff: My only question was when did you take this photograph?

Shroff: Right. Months before you’re now saying that you decided to cooperate, right?

Betances: Could you repeat that question? You confused me.

Shroff: You took the photo before you decided to cooperate, according to you, correct?

Shroff: Right. And you’re saying you just decided to take these photos for no reason at all, right?

Betances: May I remind you that the reason I took it was because I head the conversation that I heard?

According to his testimony on redirect, Betances did all this without government instruction.

Karamarju: Now, all of the photographs that you testified about, did the government tell you to take any of those photographs?

The remarkable coincidence that a jailhouse informant would end up first smuggling in and then guarding her client’s illegal phones and then taking pictures from them is not the only thing Shroff was skeptical about. She also doubted the circumstances by which Betances exposed his wife to the risk of smuggling phones into jail as well as his ability — with little English — to figure out what Schulte was doing, to the extent he did.

Still, all that is explicable if Betances’ attorney negotiated a plea deal with narcotics prosecutors and the attorney coached Betances through how to dramatically increase the value of his cooperation by catching Joshua Schulte attempting to leak classified information from his jail cell.

Betances’ surveillance was critical to obtaining the jail warrants that would lead to the discovery of Schulte’s very damning prison notebooks, several phones, three of the Proton Mail accounts he was using, and his Signal traffic. And that’s just what prosecutors revealed in this case.

Betances met with prosecutors in Schulte’s case a bunch of times: first in September 2018, then October and December 2018, several times in 2019, and then perhaps five times in 2019.

None of that means Betances made this stuff up. He certainly doesn’t have the English skills to write those emails to Shane Harris. And while the evidence regarding Schulte’s comments about Russia are contradictory, there is corroboration for it.

But it does present a number of remarkable coincidences that just ended up providing Schulte the means to communicate “securely” from his jail cell, only to have that activity thwarted at the moment he attempted to act.